First of all, a breakthrough in our current investigation: CODE ORANGE: What’s Happening On the Faces of BlueBell? If you look closely on this cheery mail-carrier — and, later, on AB — you can actually see the line where the bronzer ends and her unmolested skin begins, up by her hair. WHY this is happening — a bad batch of makeup, a weird reaction between normal makeup and new lighting, whatever — I do not know, but yes I am obsessed with it and once you see it IT CANNOT BE UNSEEN: Even if the show attempts to distract us with Shirtless Wade: Here’s Wade’s plot for the week, and it’s actually very charming and well-done: He is an inveterate flirt and Zoe wants him to cut it out. Not because she’s jealous, but because she thinks it’s going to set a bad example for their son. We get a lot of montages of Wade flirting, all of which are amusing, and we also learn that he has a $4300 tab at the Butter Stick because he’s literally never paid for a pastry there. (Which also reminds me: Wade must work out A LOT or have the metabolism of a thirteen year old marathon runner, because he apparently gets treats at the Butter Stick [which also seems to be spelled The Butterstick, and eff that noise, I am NOT doing that. That’s the one that broke me, finally] constantly AND we know Lavon’s house provides an unending stream of Kitchen Pastries.) He gets Lavon to help him break the habit, which consists mostly of Lavon whacking him upside the head whenever he flirts with someone, and that goes well UNTIL they decide he needs to gather The Ladies With Whom He Flirts Most together and tell them that they have NO SHOT of getting into his Levis, so the flirting will STOP! Everyone obviously wigs at this and storms out — all, “who do you think you are?!” and “I am MARRIED!” and “I am NEVER delivering your beer on time AGAIN!” — and Wade then has to give them ANOTHER speech, later, in which he thanks all of them for being so good to him over the years (for making sure he was fed, and had a haircut after his mother died, for example) but that he has to be a man now, and THAT smooths things over because everyone who lives in BlueBell is basically a nice human being.

I didn’t mean to cover that in one fell swoop, but. Here we are. Anyway, it was charming and very well done and a nice light antidote to the heavier plotline this week, which is The Return of Alice, Lemon’s Mother. As you can imagine, Lemon has all kinds of feelings about this, and they’re all tied up in her topknot: Brick basically tells Lemon that he has some sympathy for Alice now that he’s heard her side of the story — and that it has, as Shelby told him, helped him with “closure” (Shelby is basically awesome throughout this) — but Lemon is rightly unmoved by the whole thing, especially because neither she nor we have heard this whole side of the story. I assume that they’re waiting for a scene wherein Alice tells Lemon herself, but I wish they’d at least have had Lemon note that she didn’t want to hear it, because it always feels a little unnatural to me when someone says, “wait until you hear her side of the story,” and the response doesn’t involve ASKING WHAT THAT IS.

So, these two are happening: And I am having the weirdest reaction to it: I like both actors, and I have never felt this way about their romantic interactions with any other characters, but when George and AB are all schmoopy together, I get the strongest sense of second-hand embarrassment about it and I do not know why. I, like, almost have to look away. I cannot explain it. I think they’re both selling their Sudden Smittenness about 15% too hard, and that translates to a lot of googly eyes that weird me out. Or, I am just cold and dead inside and the presence of love make me uncomfortable. ANYWAY. They are going out, but they’ve been given instructions from Crickett’s girlfriend JaYssssseeeeey*n not to go anywhere that will rustle up any old memories of any other dates, which is basically impossible in their neck of the woods, and so they end up at a terrible Norwegian place, and that, I must say, turned out to be EXTREMELY funny, and not only because the actor playing the waiter went Full Swedish Chef with his accent, and was generally hilarious. (To wit, his line: “It is fish cooked in lye and you will eat it and…hmm….not complain.” Maybe you had to be there. I laughed throughout his moment. Also, “Norwegian wine tastes like urine from a mink whale. You will have French and….hmmm… you will not complain.” I don’t know. He was funny to me.)

I couldn’t get a good shot of this outfit on Lemon, but it’s a jumpsuit and it is terrifying: You can’t blame her, though. She’s got ISSUES right now. For example, Alice shows up at Fancies to try to talk to her, and, like, lady, BACK OFF. You cannot just swan into a woman’s place of business and demand her attention when it appeals to you. Write her a letter and let her come to you. Lemon throws her out, and Alice goes with a helpful comment about where she herself works, in case the idea of having a super emotional convo with your long-lost parent at her place of work appeals.

Zoe, on the other hand, continues to look adorable. Rachel Bilson is a very cute pregnant lady: And in other good news, Lavon gives George his blessing to go out with AB, allowing Second Hand Embarrassment Train to continue to ride all over my property: I’m glad he does it in a jaunty hat. I also thought you might be interested to know that the Rammer Jammer serves bar snacks with their coffee.

So, Scarlett Kincaid, Alice’s Broken Armed Child, comes back to see Zoe for her follow-up because she loved her (with her father in tow; it seems HE doesn’t know about Alice’s other family EITHER, which…Andie McPhee is making some bad life choices) and of course she runs into poor Lemon, who obviously knows who she is: It’s awkward and terrible and maybe a little bit heavy, even, for this show, but the end — spoiler — is really nice and reflects extremely well on Lemon.

BOTH of these dresses are cute: But this dress, on Lemon, at her stepsister Ethel’s first birthday  (an extremely OTT extravaganza, as you would expect from Shelby in partic and BlueBell in general), might be the best of all: Jaime King is quite pregnant right now, so she may well have been pregnant when they filmed this scene, and that dress is excellent concealment if it was needed. Here, she is listening to Shelby give a toast to her baby daughter — the whole This Child Is The Best Thing That Ever Happened To Me thing — and getting more and more upset about how her OWN mother then abandoned her and Magnolia: Zoe wears the above maxi-dress for basically the rest of the episode, and it suits her. Zoe tells Lemon that it really helped her to confront her own father (the crappy one, not the secret dead one) and Lemon takes this in very thoughtfully until she realizes to whom she is listening and sweeps off.

But she does go and see her mother. And unfortunately, Scarlett overhears a very pertinent part of this confrontation (which would have been better held in private and not at a cutesy sundries shop but you know. Things happen) and obviously does not react well to finding out accidentally that her mother has A WHOLE OTHER FAMILY SHE ABANDONED. She runs away and everything, which Zoe and Rose manage to fix. I don’t hate this child actor — AT ALL; she’s actually quite good — but we are spending a lot of time with this kid when there are so few episodes left and it starts to feel very slightly Cousin Oliver-ish. I get why they went there, and the end bit is good, but I hope this is close to the end of our investment in Scarlett. I just don’t have time for another person on this show to care about right now. It’s a shame that Scarlett arrives just as Lemon is really getting up a righteous and well-earned head of steam, and Lemon feels TERRIBLE about, as she said, ruining this kid’s life. But something good comes out of the whole mess. These two are BACK ON. Lavon tells her he’s “all in” and everything and although there is no kissing, kissing is surely on the schedule as soon as Lemon deals with her major life trauma WRT to her mother. I am very relieved and excited to get these two back on track to their destiny living in Lavon’s huge house, surrounded by breakfast foods and trying not to get eaten by Burt Reynolds.

AB’s dress for her Ill-Fated Norwegian Dinner Date is cuter than it looks in this shot: And the date went very well, to the point that they almost make out, but the Ill Fated Foods of Norway give them both wretched food poisoning. (Also noteworthy: I have noticed that the writers have AB call George “George Tucker” more often than any human being would do — I get this writerly tic, I’ve done it myself, and I think it can be useful. But they’ve gone full Joey Potter with it. AB calls him “George Tucker” something like six times in this episode and TWICE in three lines alone in this scene. The line in between those two lines, HE calls HER by HER full name. It’s too late now, but someone on this staff needed to be on George Tucker Watch. [Everyone does this with something. Heather and I had to do an Italics Pass on The Royal We because we love them. We love them too much. ]

Shelby’s coolness about basically everything has endeared her to Magnolia, which is nice and which seems like something you ought to know, along with the fact that Brick has REALLY nice china: There is also a very nice moment in this scene where Magnolia tells Lemon that she doesn’t even remember their mother, and that Lemon is the only mother she’s even known, and ergo she leaves the question of how to handle Alice (and Scarlett) in Lemon’s hands. It was lovely.

And so Lemon puts on this GREAT dress and goes over to Alice’s and decides she is going to get to know her little sister: It was very mature and very touching and very maternal of Lemon, and I say: good on you, Breeland. You did the right thing. She shuts down her mother, but she opens her heart to her sister, and the episode ends with the three of them at the Rammer Jammer, having breakfast and talking about One Direction, and it’s really nice. Also, these earrings are great.

Additionally, AB and George have a breakfast date and she wears this cute dress and they finally do make out and it kind of gives me the weirds again: I don’t know. At least her dress is cute? 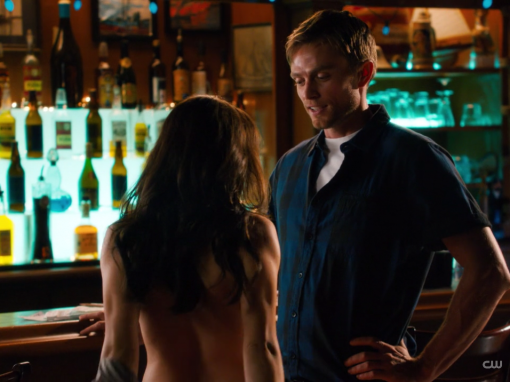