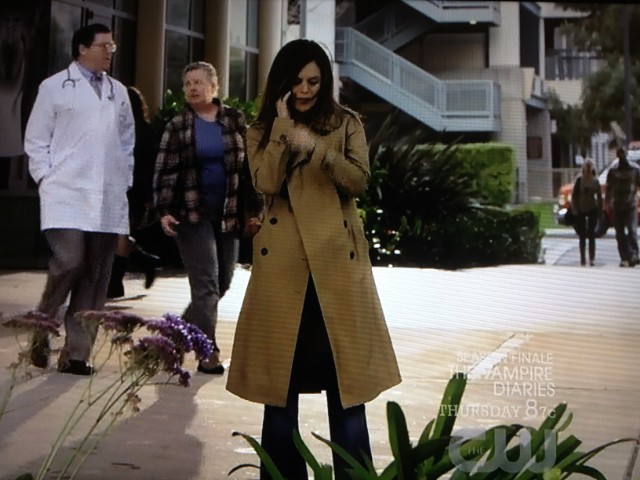 First of all: we learned Friday that Hart of Dixie was renewed for a second season, and we’re actually really excited. This show is too cute to be cancelled. Sadly, Ringer WAS axed, so I suggest we all take a moment of silence for Heather’s exceptional recaps. And also for Ioan Gruffudd, who is too hot not to be on TV weekly.

Second: on Friday, Jaime King tweeted us that she was bummed we never say anything kind about her anymore,  so I want to get this out of the way right at the top: She was really funny this week when Lemon got her head stuck in the bed. In fact, I’d argue that when this show lets Lemon be funny — like when she was pretending to be HNW’s trashy wife, or the time and she HNW and George were cat burglars — is when this show works best. So, more comedy for Jaime next season, writers! Also: I did really like her pants last week, so there you go.

Third: what actually happened on this episode. Not very much, considering it’s the penultimate episode of the season. Zoe decided she almost killed Rose by not realizing Rose’s appendix was about the burst (but in her defense, it’s not like Rose was rolling around on the ground holding her side and moaning). So the fact that Zoe decided to LEAVE TOWN FOREVER over this was ridiculous, and it’s apt that she changed her mind and came back.  George and Lemon decide to get the romance back in their relationship — a great sign one week before their wedding, which…I can’t even. — by going to a hotel for the night, where they get drunk and Lemon gets her head stuck between the bars of the iron bedstead. As amusing as that was, I can’t IMAGINE they’re really doing to marry them off tonight. I mean, right? Because….I mean…no, right? Right. Lavon: did nothing but wear a good hat, because they seem to have no idea what to do with him. Hot Neighbor Wade: blew an opportunity to get a loan for his bar (that Lavon set up, because Lavon rules) and is….a  screw-up?  I don’t know, you guys. The middle of this season had a lot of interesting conflict and love-quadrangles going — Lemon’s mom, Lemon and Lavon vs Lemon and George, Zoe and George, Zoe and Wade, etc — and all of it has kind of wilted in the last couple of episodes. Hopefully they were just treading water for the finale tonight, because Wade Continues To Screw Up is kind of a weird place to take a character that used to be pretty likeable, and I think Lemon and George are both funnier when they’re not together. So….I guess we’ll see? Let’s take a look at what they all wore.