Unfug It Up: Julianne Hough

The good news about this outfit: It hung a “Vacancy” sign on my brain that immediately enticed an earworm known as Kenny Loggins’ “Footloose,” which burrowed comfortably into the open spot and refuses to leave. Generally speaking, Mr. Loggins’ movie themes are always welcome in my head — I’m all right, nobody worry about  me, I’m just on the highway to the Danger Zone — but “Footloose” is a particular favorite of mine. Somehow my family had two cassettes of the soundtrack, and to this day, the title track is one of those songs whose words I have never actually known, which does not stop me from belting it out in the car and just sort of spitting out a mix of potentially correct lyrics and complete gibberish, like the opening lines: “Been workin’ so hard. I’m ponch to my cart. Eeee yuuuur fer wuurrrr don’t tell me what a guy.” Or my other favorite verse: “You’re flang is so cool, obeying every rule.  Inna workawn ooooh your heart, you’re flarn in the yarn in the soul car…” And I know I could look up the correct lyrics, but I don’t want to, because I’m already driving the soul car and totally ponching my cart. 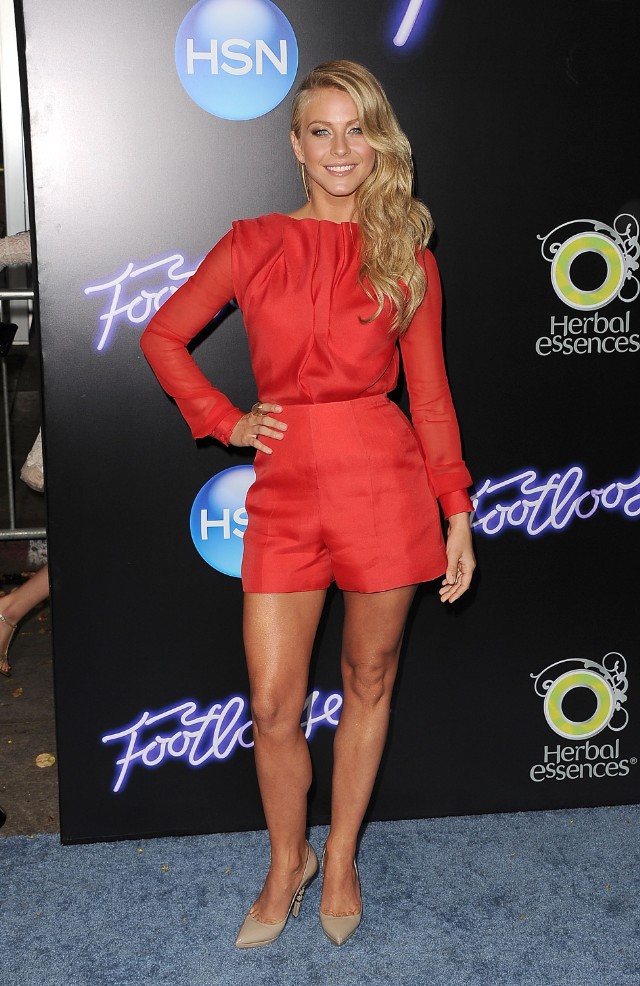 I think a brain scramble is the only explanation for Ms. Hough — trying to be the next hot young movie star — getting this outfit out of her dreams and into her soul car. (I don’t think Mr. Billy Ocean would mind being yoked to Kenny Loggins here, do you?) This matronly high-waisted shorts ensemble looks like it came from the Talbots Hot In Cleveland collection. In other words, it is totally flarn in the yarn. I don’t really think this is WORTH fixing, but let’s pretend we have to, okay? Could this be saved with a balls-out sexy pair of shoes? (My guess is no, because shoes don’t cancel demi-culottes.) What if it were a miniskirt, or even a dress? Would you fix the sleevage, or add some cleavage? Discuss. Preferably in coherent words, because Mr. Loggins really prefers people to leave the gibberish to his expert larynx.