Day Seven of the Royal Tour Brings Us Dots and Stripes! 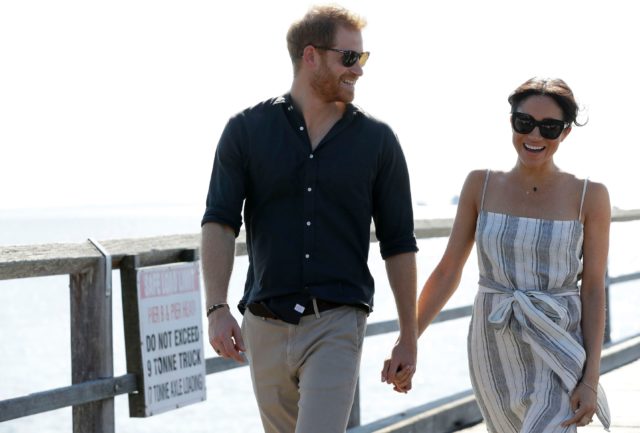 The Royal Tour marches on! (We had a lot of coverage over the weekend, and if you missed any of it, you can catch up here.) On Day Seven, Meghan and Harry flew off to Fraser Island, where Meghan took it a bit easier while Harry did all kinds of neat and cool things. Also, look at this:

In case you’re wondering, #FraserIsland isn’t a dinky little resort town. The world’s largest sand island is 123km long and far too big to capture in one sweeping drone shot (thanks for the loan, @DJIGlobal). #RoyalTourAustralia #HarryAndMeghan pic.twitter.com/QLOseSW7tW

GORGEOUS. Can we put this on our Fug Nation Australian Bus and Boat Tour, which I’ve just invented? It’s so pretty:

We didn’t really get pics of Harry and Meghan taking off to the island, which is a shame, because I love her dress:

The Duke and Duchess of Sussex are en route to Fraser Island! #RoyalTour pic.twitter.com/fiTRpRkEFP

It’s from & Other Stories, which is a frequent high street choice for her, and you can see it better on their site. It looks very forgiving on a body (pregnant or otherwise), and I am always going to be in favor of a polka dot. (It also kinda reminds me of the polka dot dress Kate wore last week; a Duchess mind-meld at work, surely, although Kate’s is from Whistles).

Here it is in motion:

So tropical, & those sandals seems to be her faves. She worn them on many occasions. PERFECTION️I could see her re-wearing this dress when she and #PrinceHarry goes to those Commonwealth islands in the Caribbeanlady on the ground saying she looks beautiful
#royaltouraus pic.twitter.com/GctHVbRKjg

The sandals are those Sarah Flint ones she digs; the sunnies are Karen Walker (who is a Kiwi). Heather and I actually both got Karen Walker sunglasses at one of her fashion shows once and they’re really nice, if you’re on the fence about them.

(Speaking of Events For Which There Were No Good Pics, Harry and Meghan also had a Surprise Private Reception over the weekend at which she wore this Jason Wu dress; it’s very much in keeping with the rest of her wardrobe for this tour, but as black cocktail dresses go, it’s pretty unimpeachable.)

Anyway, while Meghan rested up at the hotel (I decided she called her mother and had a cozy chat, then ate room service fries and watched some Aussie soap operas on demand, as well she should; Australia’s soaps are iconic), Harry was formally welcomed to the island, unveiled a plaque, and, per People,  “visit[ed] one of Fraser Island’s iconic lakes to meet with local elders and national park rangers to learn about the island’s natural beauty, rich history, biodiversity and cultural significance….then [travelled] to the beach to learn about the history of the island’s logging trade, as well as its use as a training base for the Australian Z Special Unit during World War II.”

#princeHarry is formally welcomed to gorgeous Fraser Island or K’gari as it’s known by the Traditional Owners the Butchulla people in a smoking ceremony for @QueensCanopy Fraser Island is the largest sand island in the world, and has a total of 206,970 acres of protected forest. pic.twitter.com/V0A2GRMAAa

This pleases me. I love jokes about tiny curtains:

‘Luckily we are highly skilled in unveiling plaques, it runs in the family.’ Familiar Philip and Charles joke given a run out by the new guard #RoyalTour #RoyalVisitAustralia @5_News pic.twitter.com/6nJ9531Uox

They don’t call this place paradise for nothing – some of these tall satinay trees are over 1000 years old! pic.twitter.com/qWfGRNVJQD

Meghan did pop out for the final event of the day, a walkabout, in a new outfit AND MORE PATTERNS. Are you reading this right now, Meghan? Did you hear our cry for patterns? And, if so, can you walk out onto the hotel balcony and make a grand show of reading The Royal We, ideally laughing HUGELY and then sobbing dramatically at all the appropriate bits? We’d SUPER appreciate it.

Anyway, this dress is from Reformation — which feels VERY Los Angeleno Goes On Vacation to Australia in a way that pleases me as a Los Angeleno who wants to go to Australian on vacation; I think the slit on the side acted up in the wind in a way that she wasn’t thrilled about, but, as we all know, it takes ages before Royal Women are officially granted the power to control the elements. (It also kind of feels like the casual version of this Altuzarra dress, but better deployed.) Let’s take a closer look in the slideshow and discuss.

I Have Something Important to Say to Katy Perry