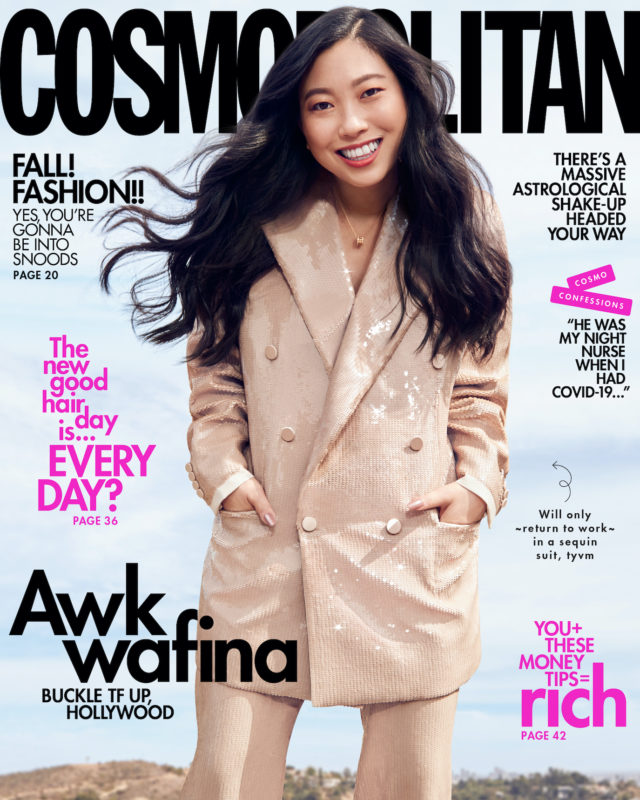 This cover is LEGIT CUTE and one of the best one’s Cosmo has done in a long time! My big note is that I almost would have had her wear this blazer as a dress — but as we learned in her recent Red Carpet Retrospective, Awkwafina loves a pants suit and almost never goes to Leg City, so this is actually quite on brand for her. Bravo, y’all — including whoever it was on staff who figured out a way to make having Covid into something Cosmo-y. That’s not snark, I’m genuinely pleased that they pulled that off. NATURE IS ETC ETC!

The interview is for Cosmo subscribers only, so I wasn’t able to read the whole thing, but if you’ve got a sub, or want one, click on through! The excerpts sound like it’s a pretty good read:

Awkwafina on the shift from playing the role of The Funny Sidekick to doing her own stunts in a full-blown Marvel superhero movie: “Dangling off of things and flying, falling backward…it’s really different from, say, an indie rom-com. It’s really cool. It’s so weird to switch from ‘friend mode.’”

On the cultural significance of movies like Shang-Chi and the Legend of the Ten Rings, the first Marvel film to star an Asian superhero: “These movies make me so proud, just as a watcher, because they contribute to visibility, which I do think has real-life effects. When the AAPI community is seen as not ancillary characters, it’s almost like, then people will know that we’re here, you know?”

On the pressure of being expect me to be funny all the time, and the message so many comedians get, that they’re valuable only when making people laugh”“Yeah. There’s always going to be the immediate want that is, ‘Okay, well, I’m going to do this because I want you to feel joy right now.’ But ultimately, a lot of comedy is grounded in really long periods of solitude and really crazy contemplation.”

On being fueled by her family history, even at a young age:
“When I was growing up, I knew how I was socioeconomically classified. I knew that my grandma was a working-class immigrant and my dad was a single dad. I knew that I would have to get through in my own way. That taught me a lot of lessons, like you really have to humble yourself, doing waitress jobs and applying to really hip stores and not getting the job and feeling like, What is even out there? You have to really hit a kind of rock bottom to really want it, to fight for it.”