Rachel is beginning to promote a film called My Cousin Rachel, in which she plays… Rachel, which must have been easy for everyone on-set. (It’s based on a Daphne Du Maurier novel.) I wish this photo of her was better, but sometimes life doesn’t give us what we want. The thing is, that jumpsuit might actually look really good on her. It’d be cute as a blouse alone, but somehow she’s making sense of it as an all-in-one garment, with the exception of the suede mules. We’ve discussed this before on GFY, but I am just not ready for mules to make any kind of a real comeback unless it’s via Melrose Place reruns, something of which my life is sadly devoid at this time. I understand why she picked them — these hit that sweet spot between dressy and casual in a way that also looks relatively walkable — but I feel like we can crowdsource a better option. Sigh. Mules. I guess it’s apt that they’re named after a stubborn beast, because I never thought they’d return and yet here they are.

This look is better: 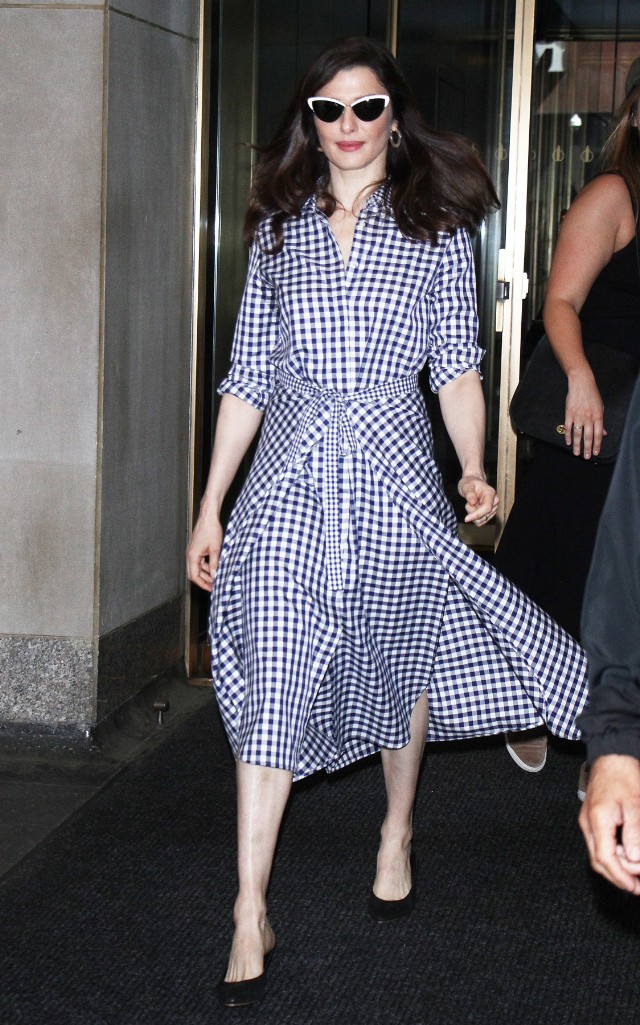 But I still think the shoe game is off by a degree or two. Why not canary? Gold? Red? Fuchsia? Any color other than black, because it steps on the easy-breezy summer vibe she’s working with the shirtdress.

In other news, this would look awful on me — wrap dresses are among the least-flattering thing I have ever worn, despite their (perplexing, to me) reputation as being so universally good — and yet because she does look crisp and chic, here I sit thinking maybe I should do a little online shopping real fast to find one that might work. IT WON’T. RESIST, SELF. Perhaps I’ll hunt for the sunglasses instead. As if that’s not going to put a dent in the savings.