The Latest British Vogue Cover Is an Ode to African Models For the February 2022 issue of British Vogue, Edward Enninful conceived and styled a tribute to the African models currently ascending in the industry — specifically, featuring these nine: Amar Akway, Majesty Amare, and Akon Changkou in the top row; Nyagua Ruea, Abény Nhial, Maty Fall, and Janet Jumbo in the middle; and Adut Akech and Anok Yai on the bottom. The attached story is full of details like how scouting and casting have evolved, and how the pandemic kneecapped some of the work that had been done to simplify the visa process for many of the models that designers wanted on the runways. It also features a quote from the magnificent Iman, and this nugget from Valentino’s Pierpaolo Piccioli:

[H]is groundbreaking spring/summer ’19 haute couture show famously featured an all Black cast. “For months, I had been nourishing the desire, the fantasy, to make couture inclusive. Simple as it may seem, it started with an iconic picture by Cecil Beaton of the Charles James salon. I said to myself, ‘What if instead of these white-swan models we had a salon filled with Black women wearing couture?’” His research took him to archive editions of Jet and Ebony. What he discovered strengthened his resolve. “Magazines [aimed at a Black readership] had to buy most of the clothes for their editorials, because couture houses didn’t want to lend to them. The more I delved into it, the more I felt I had to do something. Not to say or to promise, but to do. Fashion is the language I use to express my values and ideas, and I thought the only trustworthy, valuable statement that I could make was through a couture show with only Black models. Do I think it’s enough? No, it’s not. But every time I look at that finale picture, I know it meant something, and I know I want to do more.”

That detail about Jet and Ebony is extremely disheartening. Jet went digital in 2014 and Ebony discontinued its print version in 2019, so it’s hard to say how deep into the past he was reaching for those archival issues. Hopefully very far. (I also, though, was a little put off by the fact that as of 2019, Piccioli had only been yearning to diversify couture for “months,” as if the problem hadn’t been rampant and loudly lamented for years by then.)

The cover’s intent — and from many corners, also its execution — has earned praise. But it has not been without controversy; some people of color have expressed frustration with, for example, the lighting and styling choices made for the cover, and its associated interior editorial shoot: This piece at Bossip is a good primer about the discussion, and I’ve also read several tweets like this one. I want to be mindful of the fact that I am not coming at this from lived experience, and don’t want to climb up on a high horse I haven’t earned or which I misunderstand. Make no mistake, the cover is important, and overdue, and as Enninful says of overall industry representation, “We need to ensure these girls last. We have to invest in them, nurture them and support them with editorial, with advertising, with shows. It has to be 360…Getting these girls and then throwing them away after one season? That has to stop.” But I also thought it would be short-sighted of me to paper over that line of criticism, coming as it does from voices with more authority than mine. It struck me as a worthy chapter in the ongoing conversation about whether Black models, even as the stars of the show, still aren’t getting the best from the industry in which they work — criticism that has been aimed, deservedly, at American Vogue many times. These are exciting, vibrant women who’ve been working hard to change the look of our runways, but the styling and lighting and direction feels like it let them down a bit here; that cover is a celebration that does not feel very celebratory. Enninful doesn’t strike me as someone who does anything by accident, so I wonder if I’m missing an underlying artistic message behind some of what he did, particularly the uniformity of the above photo. (I haven’t found a discussion thereof, but that obviously doesn’t mean it isn’t out there.) His editor’s note is lovely, and unequivocal on the subject of how much this topic means to him:

“[T]he February issue brings readers Vogue’s first distillation of the new collections, and as any fashion watcher will have seen at the season’s shows, the rise of the African model felt, at last, like a permanent revolution. No longer just one or two dark-skinned girls mingled backstage, but a host of top models took a meaningful, substantial and equal place among the most successful women working in fashion today. It means so much to me to see it. Of course, there is a question of race here. It would be inconceivable for me, as a British Ghanaian, to feel anything but personal joy at that. But the rise of African representation in modelling is not only about symbolism, nor even simple beauty standards. It is about the elevation of a continent. It is about economics, access, culture, perspective, difference and wonder. And it is here to stay.”

He spoke of making magic on set that day. Did it quite translate? Is the wonderful Adut Akech getting swallowed up here? 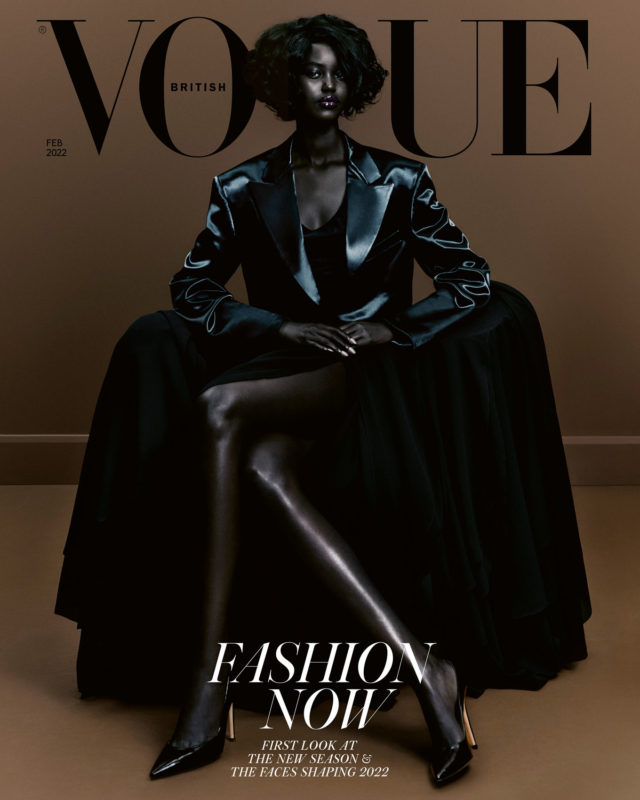 I’d love to know what you think.