What a difference a decade makes. On so many levels, especially where the Kardashians are koncerned, but in this kase I’m referring to the endorsement deal that I’d completely forgotten about until digging around for today’s posts. Remember Silly Bandz? They were rubber-band-like bracelets that came in shapes that were, yes, silly. Kids went nuts for them, for reasons I cannot understand, which is probably a good thing. Anyway, the Kardashians at this point had opened a boutique, Dash; tried a Shoedazzle partnership; started and ended a kredit kard; and were planning a Sears line. And then they joined forces with Silly Bandz to make special Kardashian shapes like… their store logo. The word “glam.” A letter K, of course. A diamond ring. A perfume bottle. A high heel. Their silhouettes. And a truly terrible set of lips. 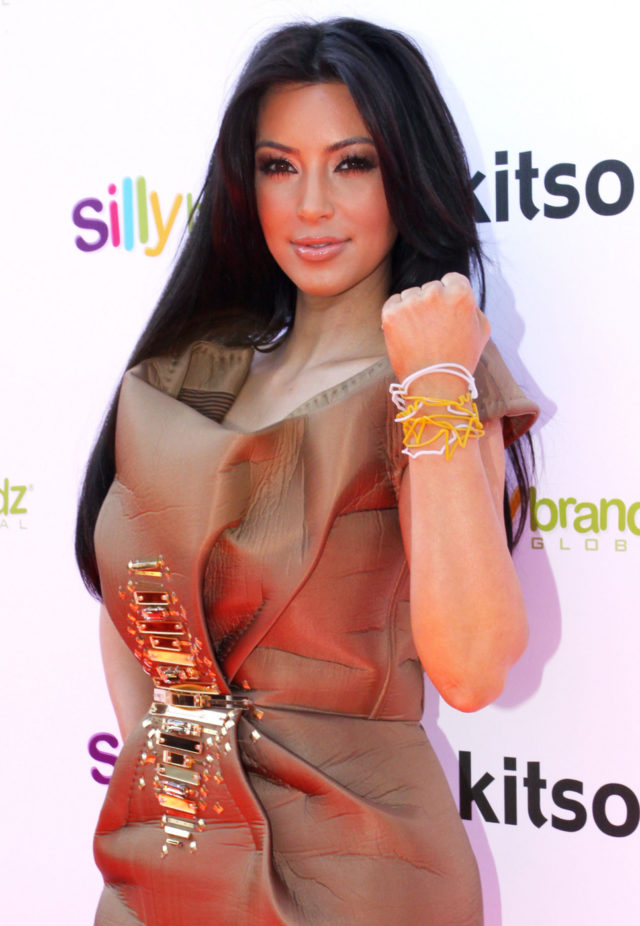 You can’t even tell what they ARE when she wears them. In normal life, for normal people, I feel like this level of brand diffusion would backfire. It’s too much STUFF and none of it means anything. But I guess for these people literally everything they touch either turns to gold or turns to ash so fast that people forget it ever backfired and give them 18 other changes to make precious metals. Ten years on, and they’re all alleged billionaires with beauty empires and shapewear lines and more. So throwing everything at the wall to see what stuck did, in fact, pay off.

And I haven’t even GOTTEN to the dress yet. Obviously Kim herself looks very different — it was an early phase in her metamorphosis — but she also wouldn’t come near this now with a ten foot pole. It’s the unholy union of a wet suit that’s four sizes too large, and a Xylophone. She could play herself. Then again, by wearing it at all, she already did.