On This Day in 1928, Norma Shearer’s Publicist Made Her Go to the Beach. 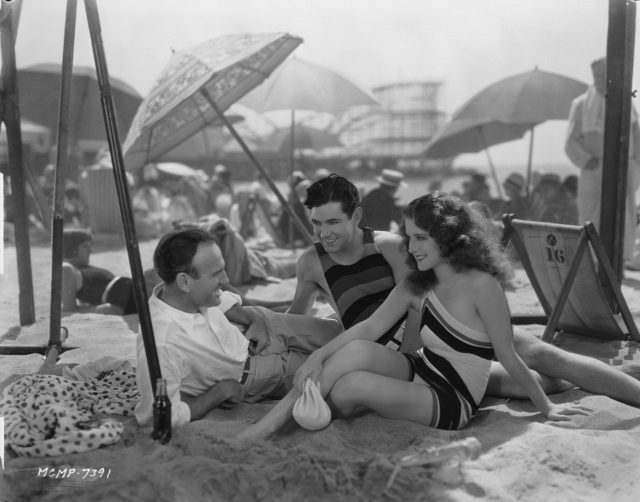 First: I love Norma Shearer’s striped swimsuit here, and although my primary source of information about her is, once again, having owned some paper dolls made in her image, her Wiki is a fascinating ride that includes both her showing up at a party in a dress that was too big for her to get through the door and her eventually marrying a young ski instructor. Her hair is also my dream hair here.

Second: The hunky co-star is Johnny Mack Brown, who was a MASSIVE college football star for the University of Alabama before he became a movie star (he scored two touchdowns in Bama’s first ever Rose Bowl win) and who ended up doing a lot of westerns. He’s ALSO got great hair.

Third: I don’t know who the non-bathing suit-wearer is — Robert Z. Leonard directed this film, but it’s not him. It might be the screenwriter, A.P Younger (who tragically shot himself and died in 1941, in an incident that was ruled an accident but seems like it may not have been). The movie they’re “taking time out from filming” for this super candid and not at all planned by the studio photo was called A Lady of a Chance, and it sounds like it might be a hoot, as it is primarily about people conning other people out of their money and then fleeing town. EVERGREEN CONTENT.

Fourth: For you rollercoaster fans, that one in the background used to live on the old Santa Monica Pier, the history of which is sincerely fascinating.

Fifth: That Coke there in the sand definitely had cocaine in it.

Six Years On, I Still Remember This Siriano on Teyonah Parris

Hailey Bieber Did It Again

Limp Bizkit Had an Album Release Party on This Day in 2000….