I think this lady next to Gabrielle Union is my soul sister. 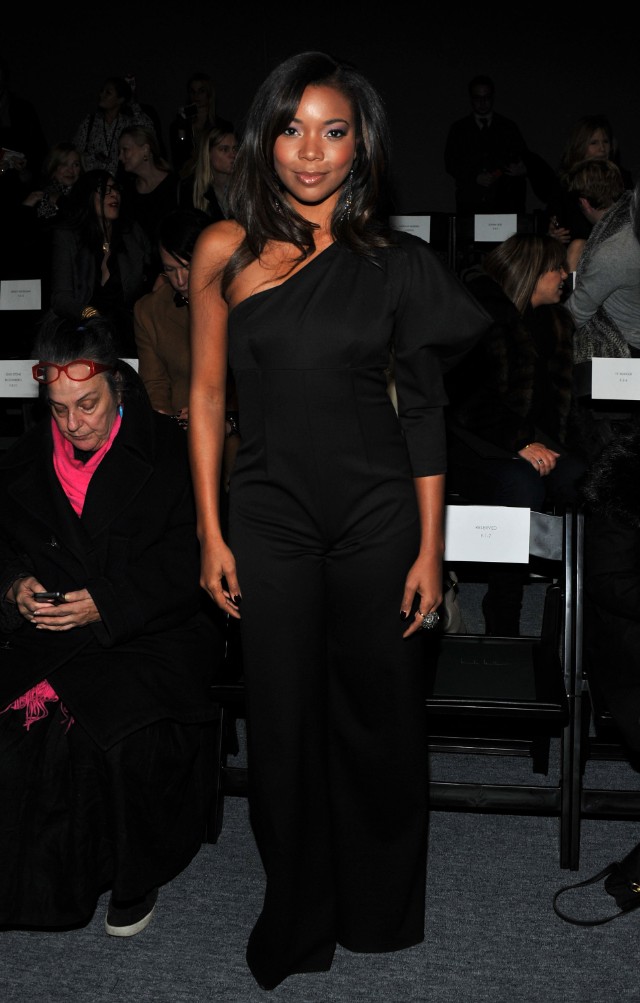 I mean, I have no idea what she is using her phone for, but I like to think she is actually doing what I was only imagining doing at the time this photo was taken: texting somebody to say, “Sweet holy crap, Gabrielle Union is wearing a jumpsuit that makes her crotch look like a firework.”

However, at this Nicole Miller show on Friday, we did chat with Gabrielle’s seatmate Taraji P. Henson, who turned out to be totally awesome. (We’re sure Gabrielle is, too, but we just think maybe when she lost her feet in this thing she also lost her mind.) We also saw Stephanie Seymour’s son Peter, a.k.a. the one who was photographed quasi-groping her on their beach vacation. Some people argue that his avowed homosexuality makes those pictures acceptable, but I think — especially since he ALSO avowed that they were fully aware of the cameras — that creepy is creepy.

Other tidbits: Julia Stiles debuted new bangs at Cynthia Rowley, and Olivia Munn refused to kow-tow to Kardashian Fever at Charlotte Ronson. We also loved Jason Wu’s and Peter Som’s shows (but didn’t write about them), and abandoned hope of getting into Erin Fetherston’s presentation because of a painful logjam at the elevators. Note to Milk Studios: When you have ONE lift, do not schedule THREE shows at the same time. People will swarm, people will feel claustrophobic, people will flee.