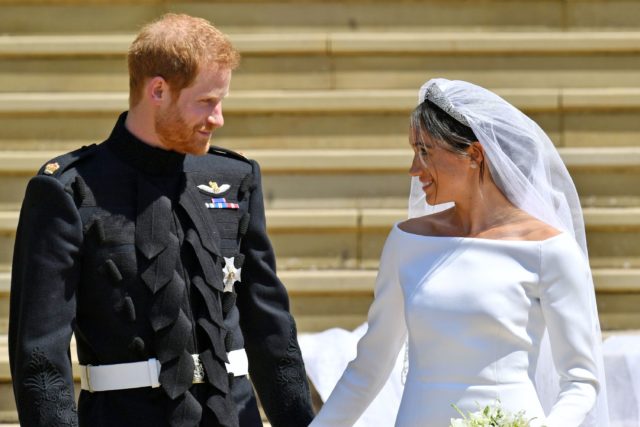 WELL! We have much to discuss, and thank you for your patience in waiting for this post. Heather and I were in Windsor today for the wedding and I’ve only now just gotten back to my laptop. I highly recommend being royal-wedding-adjacent. It’s EXTREMELY reasonable as an experience. In particular, it was thrilling to be waiting to see Meghan get out of the car from our location on The Long Walk, and then even more thrilling when she did emerge and everyone cheered and oohed and aahed.

First of all:  TODAY WAS ALL SO VERY ROMANTIC!

With that important, all-caps-y statement out of the way, of course, we tackle the dress — or as I suppose I should call it, THE DRESS. It is Givenchy — which none of us anticipated, and honestly I am fairly sure I would have laughed in someone’s face if they told me Meghan would wear a French brand. Now, now, I hear you: Givenchy’s lead designer, Clare Waight Keller, is herself British, and as the first female artistic director of a French fashion house is a bit of a feminist trailblazer. She also has British design bonafides, as she was head designer at House of Pringle, as the Palace pointed out in its press release. But I truly thought we’d see a British brand here, or maybe an American one. Givenchy feels like a bold choice.

The dress itself, as you saw and will see, was very simple; I love the neckline, and I think its simplicity is extremely appealing, though I worry it’s almost too simple from the waist-up (i.e, in many of the photos). It is modest and almost retro, but manages very much to not recall Kate’s gown, which I’m sure was a consideration (simply because it’s human nature to want to look as much like your own self as possible). I do wish the sleeves and bodice fit a bit more snugly — I suspect Meghan dropped a bit more weight over the last week or so than she anticipated — and as much as I actually love a profoundly simple gown, I wonder if it potentially needed a bit more detailing for visual interest in the pictures?  As I said: Much to discuss. (And if you want to read other pieces about the dress, Robin Givhan’s is great. )

As for the rest of this look, the veil is stunning, and I think the star of the sartorial show, especially when paired with that superstar tiara:

As per the aforementioned presser:

Ms. Markle expressed the wish of having all 53 countries of the Commonwealth with her on her journey through the ceremony. Ms. Waight Keller designed a veil representing the distinctive flora of each Commonwealth country united in one spectacular floral composition….Wintersweet (Chimonanthus praecox), which grows in the grounds of Kensington Palace in front of Nottingham Cottage, and the California Poppy (Eschscholzia californica) the State flower from Ms. Markle’s place of birth, California.

Symmetrically placed at the very front of the veil, crops of wheat are delicately embroidered and blend into the flora, to symbolise love and charity.

Is there ANYTHING better than Wedding Gown Symbolism? I say no. The Californian in me thrills to the addition of the poppy.

The spring blooms include Forget-Me-Nots which were Diana, Princess of Wales’ favourite flower. The couple specifically chose them to be included in Ms. Markle’s bouquet to honour the memory of the late Princess on this special day.

The Bride’s bouquet is a petite design, pulled together in a gentle, ethereal, relaxed style with delicate blooms also including scented sweet peas, lily of the valley, astilbe, jasmine and astrantia, and sprigs of myrtle, all bound with a naturally dyed, raw silk ribbon.

The myrtle sprigs are from stems planted at Osborne House on the Isle of Wight, by Queen Victoria in 1845, and from a plant grown from the myrtle used in The Queen’s wedding bouquet of 1947. The tradition of carrying myrtle begun after Queen Victoria was given a nosegay containing myrtle by Prince Albert’s grandmother during a visit to Gotha in Germany.  In the same year, Queen Victoria and Prince Albert bought Osborne House as a family retreat, and a sprig from the posy was planted against the terrace walls, where it continues to thrive today.

But most of all, what I feel you should know is that I pulled a lot of photos of the new Duke and Duchess of Sussex kissing.

Also you need to see this:

We’ve also got an early look at her reception dress, which is very slinky and great, and Stella McCartney (I KNEW she’d pop up eventually!):

Duke and Duchess of Sussex leave for their Reception at Frogmore! #RoyalWedding #HarryandMeghan https://t.co/skobngRnO6 pic.twitter.com/ypBketJlNO

I’ll write another post about that dress later, but I didn’t want to hold this one any longer. And if you feel like you were too sleepy to really take in any of this, we’ve got the aptly titled ALL THE BEST BITS FROM HARRY AND MEGHAN’S WEDDING:

Meghan and Harry Are Getting Married!

Let’s See What Stella McCartney Wants Folks to Wear, Shall We?