Did you miss Round One? Do you still need a bracket? Those links will help you catch up. And now onward…

Teyana downed Nafessa Williams with 66 percent of the vote, and Katy Perry easily swatted aside Rachel Weisz with 92 percent of the vote, setting up this clash of eyesores between two women who really know how to COMMIT to a look. I’ve tried to dig up some never-before-seen contenders for you here, but I have to begin with the most obvious case in point: Katy Perry, using — as we noted at the time — the bare minimum of Catholic imagination to cohost a Met Gala party celebrating fashion and the Catholic imagination. This isn’t the best shot of the outfit, but it’s hilarious. This whole slideshow is a fun ride, actually; I highly recommend starting here and then lugging your own wings down memory lane.

Teyana, too, can lean into a costume.

Indeed, she is both LITERALLY leaning, and also possibly wearing an athletic supporter? Seriously, is that a cup in there?

Katy wore minty wings as well this year, and then this purple floofy confection: This post is long, by the way, but I think you are going to enjoy the shit out of it. There is SO MUCH. Look, Katy dressed up as Kaley Cuoco dressing up as a Barbie: Katy, while hosting American Idol, showed up on-screen and on the red carpet — for a very large national audience — in a series of bizarre getups that I hadn’t seen because, with apologies to Lionel, I did not say HELLO to the reboot. Here is one:

Is that inspired by Endora, a Golden Girl, an episode of the Love Boat, or all three?

Teyana would like another chance to confuse you, and far be it from me to deny her:

Katy has a ruffled cape for you to consider:

Teyana has confusing pants, although that jacket looks great on her: Katy has Christian Siriano custom-make this for her, and I do not know on whose end the grievous error occurred, but IT DID OCCUR:

Her BOOTS have their own KNEEPADS. Or are those naplins? Kneepkins? WHAT.

(In fairness, she was at an Uggs anniversary party, but it still takes a special kind of moxie to pick Uggs that are also essentially pants, and yet also OVER pants.)

Is this… is she in costume as Cher? Because she did show up to American Idol dressed as Snow White, so anything is possible. Never. No, seriously, never. We will never finish. Teyana’s commitment is clearly to her own abs, which… if I thought I could do that to my abs, I would also marry her fitness regimen.

Katy, you’re the higher seed here. Defend your territory with the last word. Okay. NOW, for the time being, temporarily, we are finished simply because we need to VOTE THIS THING OUT.

This is one of my favorite clashes — in fact, this entire post has been a freaking delight that validates what the hell Jessica and I are even doing here. There is so much awful clothing to celebrate, through a combination of shock and awe and helpless mirth or helpless horror. YAY. However, I wrote this whole thing and my browser cruelly ate it. I don’t know when, I don’t know how, but I know I AM SCREAMING RIGHT NOOOOOOOOW. Please just trust that it was great before, and now it is… present and accounted for, at least?

Let’s give the ball to Jackie first: 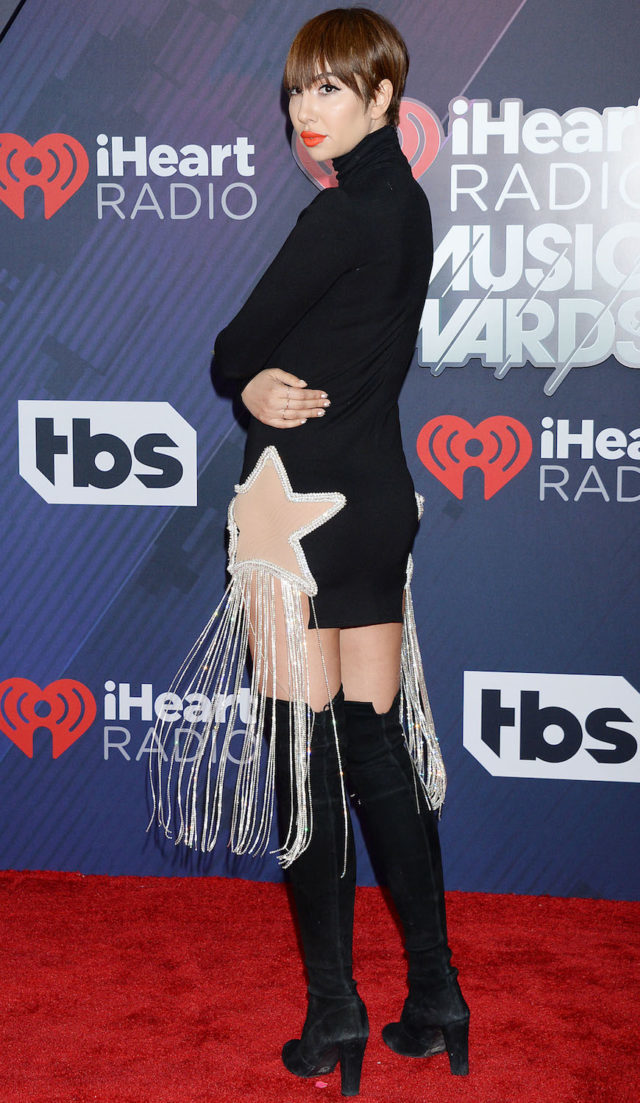 Oh, and remember this jumpsuit from the Harper’s Bazaar Icons party? It must really be hers, and she must REALLY love it, because she repeated it at some Ritz Carlton opening a few months later at which Coco Rocha danced in her face or something?

It’s all very confusing. As is this confection from a Grammy afterparty:

I’d kind of like to see that jacket styled with… oh, anything else. That’s fairly run-of-the-mill by comparison, but it shows that even the basics are going awry. It just doesn’t seem to fit very well and it’s doing nothing for her. Certainly the same could be said about this sucker: Many of you wondered if this is the same dress as Tracee Ellis Ross’s pink Emmys gown, and it is NOT — it’s a different designer completely. Which means that people are knocking off that big ol’ thing, and then making it worse.

This is from her ice dancing side hustle: 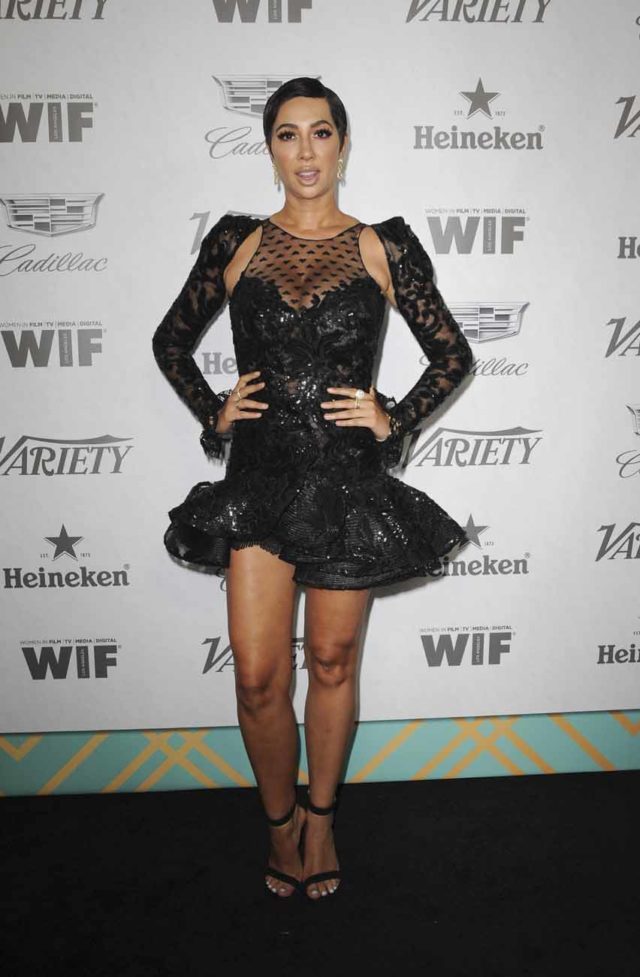 I need help with this one: Is that… beige FABRIC, or her skin coming through a cutout? My feelings are quite dependent on the answer.

And now for Jackie’s final word on the matter: Thank you, my dear. Go on and wait in the lobby, and we’ll call you back in when we’ve made a decision.

Now, on to Tessa. She wore plastic shoes to the Independent Spirit Awards, so she and Jackie clearly would not provide a shoe intervention for each other. That oatmeal-hued costume was also not her only foray into Ren Faire fashion, if you can believe it:

The best part is, I believe this next photo was shot on the way IN to Kimmel and it’s a whole DIFFERENT insane outfit: We also haven’t seen this before:

That skirt looks comfortable to sit in, at least, like she has bench seating in her dining room and decided to wear the cushion.

If you were unmoved by her black and gold Chanel at the Oscars, you may rethink that opinion once you see the Chanel for which she discarded it: Of course, she also wore a Chanel bag as a necklace, so her decisions where Karl is koncerned are klearly kloudy.

This is new information, and will ALARM YOU GREATLY: Look at all of it. The shoulder, in particular. It’s disintegrating before our very eyes. The optical illusion in this photo that she has a third leg, or some kind of back-end kick-stand, is really special. The outfit itself is a horror show that’s unfinished around the pant hems.

At least it’s not sheer, unlike this: …but then I realized it cannot be, as long as THIS photo exists: 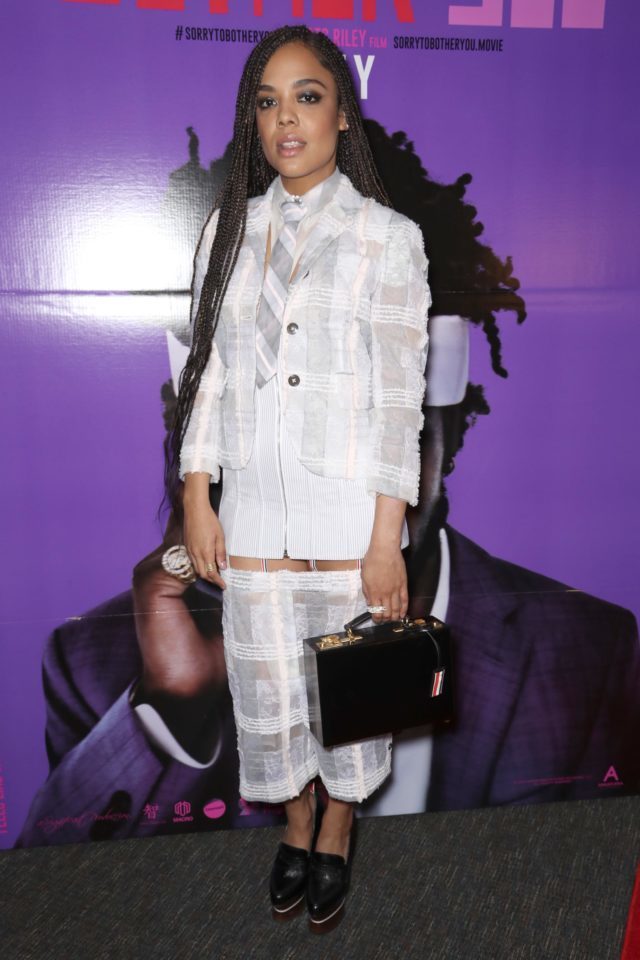 Consider that mic dropped, picked up, and then dropped again. Harder. With MIGHT.

Fug Madness 2019, Round Two: Dude, This Bracket Is Stacked

Jessica Has Something Nice to Say about Toni Collette