This one might be a closer race than you’d think, so please strap in.

Y’all, Kim was OBSESSED with two things this year. Catsuits, and snakeskin. Where on earth did she come up with this? WHO KNOWS? But check it out: I respect that her commitment even expanded to her shoes.

This is sincerely deranged: But is it more deranged than THIS? That’s a real Sophie’s Choice: I appreciate how perplexed everyone looks in this photo, too: Remember what I said about snakeskin? I wasn’t kidding: (Is that some weird reference to the apparently STILL on-going Kanye/Taylor tiff? Because I am deeply over hearing about that. We’re in a pandemic. WHO CARES.)

Kim is hard to top, but Winnie is actually a very strong competitor. Just this alone is quite intense: I don’t even understand it from a logistical standpoint. It’s….not really complete garments, is it?

I do admire Winnie for seemingly almost using her vitiligo as part of her look. She is a very beautiful person. But this is VERY sheer indeed: I feel like Kim would have worn this next one, if she could have gotten her hands on it. And might still! But Winnie, at least, offered a more varied selection of ensembles. For example, this looks like she is wearing a Muppet — which is also a serious crime, I assume you: And holy cow, this is SHORT. Even for Cannes! 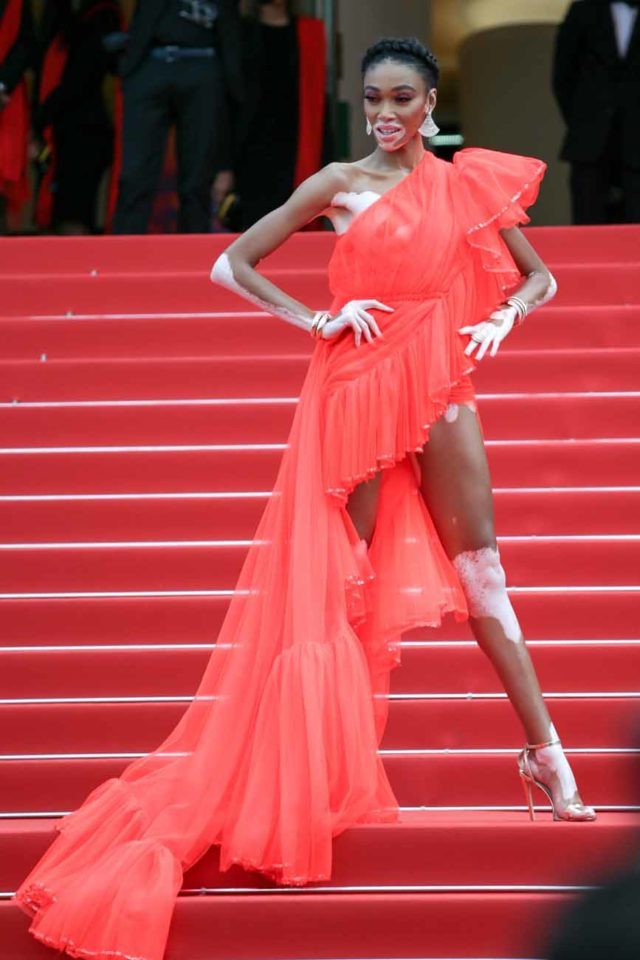 And this is truly perplexing on a logistical level to me: Why do I have so many logistical questions in this round? And is it only going to get worse? Probably. Before you vote, please know, these are just the tips of these people’s respective icebergs! We’ve got Kim’s hugely insane suit, and her 90s bootcut leather trousers, among other things; and Winnie brought us this TERRIFYING thing, and this crotch flap, AT LEAST.

Laverne had a very bizarre year, you guys, especially for a person with such a strong record of stellar looks in her past. This is a mess from head to toe: None of that adds up to a complete outfit (and the wet hair look has GOT to go; if it does Laverne no favors, who will it favor?).

Somewhere in Calabasas, Britney Spears is pretty excited about this bodysuit — but I assume she is the only one: I cannot stress to you enough that Laverne wore this to a Lakers game. A LAKERS GAME: The idea of sitting down at Staples in this, even before it was a hotbed of Coronavirus, just makes me have a panic attack.

And then, of course, there was this: Can Naomi even compete with that? Can we talk about these sleeves? Because they are absolutely beyond. Think of the snacks you could put in there. So many snacks! (Don’t ask why she’s wearing sunglasses at night. It’s Naomi Campbell.) Naomi is almost managing to work this next one, but not quite and ONLY because she’s Naomi Campbell. Please just behold this entire experience: How is ANYONE in the bracket EVER peeing? Maybe they’re all just massively dehydrated — literally, I mean, although perhaps also figuratively.

I sort of think SOMEONE else in this bracket might covet this look. Probably Winnie Harlow, but maybe also Laverne: Comparatively, this is almost sweet — if also dated: Keep on keeping on, Naomi.

Again, this is merely an amuse bouche of their offerings. There’s also Laverne’s Sheer/Wet Hair Times Two, and this sequined crotchy-thing, while Naomi gave us a dress that looks exactly like my toilet brush and this HIDEOUS FIASCO.

And before you vote, make sure you look at Laverne’s archives, and Naomi’s!