Round One is in the books, and it was a DELIGHT. We had some record upsets, some sad farewells to fug icons, and some seriously entertaining matchups to come this week. Nurse your St. Patrick’s Day hangover by feasting on the prospect of these, some of which are going to be deeply hilarious — seriously, three out of four Charo bracket matchups should also be reality shows, and Ke$ha’s next opponent is PERFECT for her. The full, updated bracket is also after the jump. Rooney muscled past Brangelina with 64 percent of the vote, and Heidi put down our beloved SWINTON by the identical margin. Math may explode when they compete in round two.

We think Lucy Hale might’ve had legs this season, had she not run up against Hudgens’ reign of trouser terror. Ninety-three percent of you pushed The Hudge through to this round, where she’s drawn the fiercest of them all, Ms. Tyra Banks. She scared off Michelle Williams with 82 percent of your vote.

Chloe Sevigny sneezes bigger than the number of votes her opponent Selena Gomez got, so she and her 85 percent trot into round two, into the face of another tweenlet: Miley, who beat back a very strong fug arsenal from Olivia Munn and captured 64 percent of the vote.

Only once before has a sixteen seed knocked out a top seed in Fug Madness, and the similarities are eerie: In our inaugural year, an upstart named Courtney Peldon beat her sister in the play-in game, and then took down Lindsay Lohan in round one. This year, an upstart named Kourtney beat BOTH her sisters in the play-in game, and then bested Katy Perry. I’m going to have to start calling her Kourtney Peldashian. Anyway, her 63 percent of the vote puts her against the sullen Olsens, who knocked out the sunny one with help from 76 percent of you. The symmetry of a girl who defeated her sisters against twins who defeated theirs is so beautiful. I think our Internet randomizer might secretly be controlled by Intern George.

Kelly Osbourne put up a good fight, but La Lopez is a wily foe, and she ended up with 59 percent of the vote. Chung, however, got a whopping 90 percent of your shudders in besting Jennifer Aniston, and may turn out herself to be an immovable object.

Lady knocked down Vanessa from Brooklyn in a really, really narrow win — we suppose La Szohr should be congratulated for validating our faith in her fuggery, but her 46 percent of the vote, while admirable, was not enough to kick the Gaga to the curb. Rashida Jones, meanwhile, beat back a charge from Gaga’s presumptive idol, Madonna; her 52 percent was juuuust enough to squeak past Madge, but can she take down Madge Jr.?

Jackson Rathbone gave us much merriment, but he didn’t get himself enough support, so Ashanti advances with almost 2/3 of the vote. Andrea Riseborough took out Emma Stone with 82 percent of the vote, so her fab clubs can breathe easy.

Cee Lo put up a small fight — that photo of him with the giant pretzel M&M may be the greatest thing in the world — but in the end, the sheer depression level of Lohan’s descent into whatever she did to her face pushed her up to a whopping 78 percent of the vote. And in an outcome I truly did not see coming, Stella defeated Justin Bieber with 57 percent of the vote, and so now we get a sad-off. Interesting bracket — all the top seeds held firm, but all the middle seeds went down in flames.

Chastain was a controversial top seed, but she muscled past Kirsten Dunst anyway, 60 percent to 40 percent, and now she gets Katie. Mrs. Cruise upset the future Mrs. Timberlake — maybe — with a strong 68 percent showing.

Rihanna and her 85 percent cruised past Anne Hathaway, and Jessica White got almost 80 percent of the vote in offing Olivia Wilde. This matchup is going to be AWESOME, I suspect.

Christina had zero trouble dispatching Paula Patton, with more than three-quarters of you declaring your horror at her outfits.  Will she be able to withstand a sartorially senseless Swede? Robyn crowned her inaugural Fug Madness seeding with an easy defeat of Fug Nation favorite Katerina Graham, with 76 percent of the vote.

Oh, Solange. Once, our Sol-angel was a top seed with a bullet; now she departs us after round one, at the hands of a Fergie walloping in which Knowles the Second only got 12 percent of the vote. It’s okay, Solange. Take it as a compliment. She now gets the victor from one of our tightest battles yet: When T.J. met Florence Welch, to my surprise, he walked away, presumably barefoot, with 55 percent of the vote. If Jessica and I did a very serious postgame show, we would label them one to watch. Jessie, in her first Fug Madness appearance, validated her high seeding by trouncing model/recording artist/Diddy paramour Cassie, winning their first-round matchup with 80 percent of the vote. Kristen Wiig and her blandy blandness put up a good fight against Mia and her blandy blandness, but in the end, Mia offended 59 percent of you and so that vaults her into Jessie’s orbit.

Ginnifer Goodwin is always a favorite to go far, but she always ends up drawing matchups that are beyond even her confusing wardrobe. Shenae Grimes cruised past her with 59 percent of your votes. SJP fended off Melissa George’s claim at fresh relevance, but narrowly — she only snagged 54 percent of the vote, but it was sufficient.

Our Lady of LookAtMe easily shoved past Lea “NO, LOOK AT MEEE” Michele with 77 percent of your support. Or is that disdain? And in a surprise — to me — Boobs Legsly couldn’t stand up to the punch of Ke$ha’s year in fug, earning only 43 percent of your vote and thus going home to brush her hair or whatever while KeUSDha carries on. I’m sort of disappointed we don’t get to see Nips vs Boobs, but then again, Nips vs. Ooze will be pretty good too. 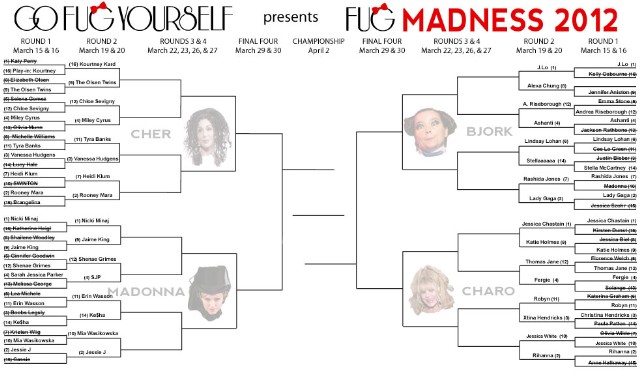