Dior Homme Is Getting In On The Harness Action 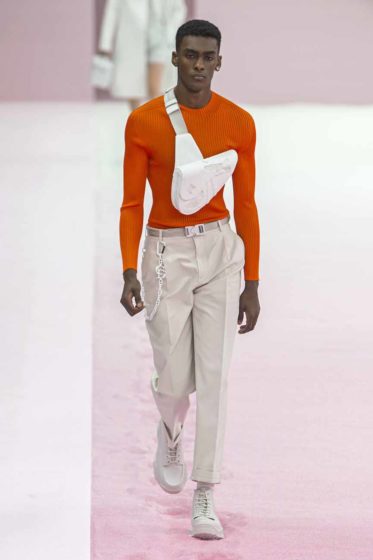 A lot of this feels very… silky. Which is intentional, per Vogue:

[Designer Kim] Jones, cleverly, has set about putting his own imprint on the business by continuing to place tailoring at its core—not going so far as to scare off the existing customer, but by incrementally transferring flourishes and techniques from the women’s couture side of the house. Last season, he unearthed the key to this Dior solution when he added a diagonal satin sash—a memory of Christian Dior’s haute couture—to the template of the male suit. It has met with success, he says: “People have been ordering them for weddings—lots of men, women too. It’s become a real business of its own.”

So he’s continued developing that for summer, integrating the sash, normalizing it as more of a lapel detail or minimizing it as a cross-body drape that disappears into a jacket’s side seam. […] Jones’s insight is that men’s fashion at Dior can move forward by accessing the elegance of the past, wondering at the beauty of what can be discovered in the foundations.”

Pardon me for so often borrowing from other people’s insights, but Vogue has the access and the background that I don’t, and I am — unlike C-3PO — not an interpreter who is fluent in six million forms of communication. Having said that, I looked at some of these and thought, “They look like they’re going on an expensive desert vacation,” and Vogue thought it evoked an archaeological dig in places, so maybe we’re mind-melding.

Can You Tell Julianne Hough from a Traffic Cone?