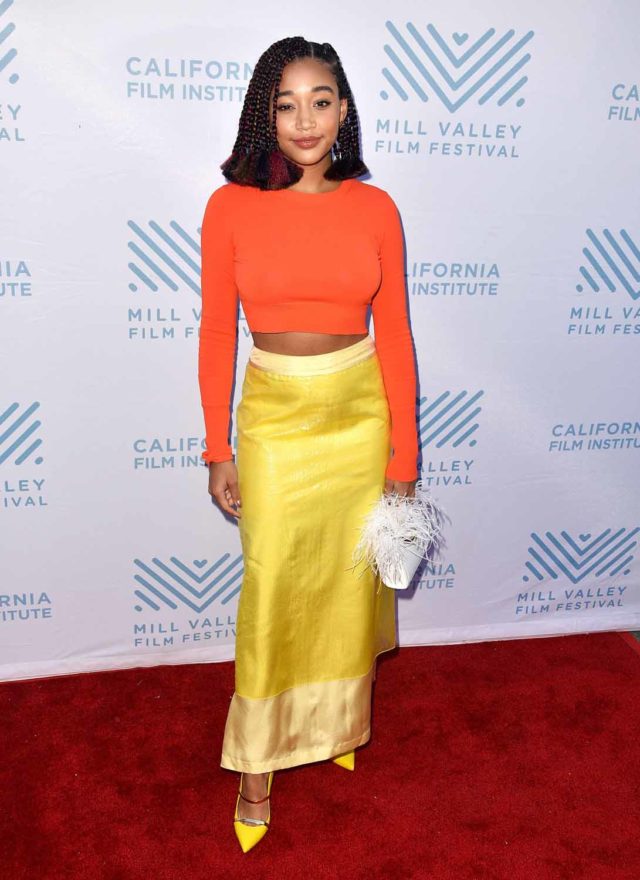 First, let’s get to the fashion. We saw Amandla on Friday in this really groovy silver minidress, and here she’s letting her hair down in a different way. I love the purple ends, and actually, the orange and yellow color combo here is a fun idea; I’m on board with the sweater and the shoes. I just wish the actual skirt seemed better-made. It really does look like an old tablecloth or single drape in the Pier 1 clearance pile. Even tweaking it to just a pencil skirt might have helped. But it’s better than the Prada she wore earlier this weekend:

Amandla x Prada x Calvin #hamptonsfilmfestival Go see @thehateugivemovie out this weekend! A film we ALL need to see! #tap

That CK outfit on the right is actually quite good, excepting its refusal to commit to a sleeve, but even that seems totally normal compared to the Prada. WHAT are they huffing? That thing is three layers whose torso cuts look absurd together. It’s like getting annoyed by a puzzle and just trying to jam the pieces together any which say so that you can say you’re finished. It’s a demented fashion jigsaw.

However: Amandla is an extremely poised young kid. They first came to fame via The Hunger Games, and they were pretty young when they were played Rue, so you can imagine the inherent risks in continuing with this industry. I feel like it’s a dice roll for anyone, much less a child. But Amandla has handled both the career and red-carpet aspects with aplomb, and has used their platform for LGBTQ issues as well as myriad other things. Just this past weekend, Amandla — who has noted a preference for “they” pronouns (which People has chosen to do) but is also ok with “she” (which EW used this week) — penned a stunning op-ed for Teen Vogue about their own sexual assault. Please read the whole thing, but this part is… well, here:

When people come forward with stories of their assaults, they are often met with “Why didn’t you speak out sooner? If this really happened, why did no one know?” As if, amid trauma, we would want to reaffirm these events and make them even more tangible, real, and dangerous; give them shape and power by affording them words and uttering our feelings out loud. As if speaking out isn’t a feat akin to David facing Goliath, but David is the vulnerable person your assault has turned you into and Goliath is the entire heteropatriarchy. The moment you speak out about assault, you’ve entered a battle where you’ve been appointed defender of your own legitimacy. You are given the responsibility of, after having just been subjected to devastating trauma, navigating impossible protocols, lest you be charged as the culprit in your own attack. You’re damned if you do and damned if you don’t. Damned to subject yourself to physical and public scrutiny, more vulnerability and social repercussions, or damned to allow the residual feelings to fester inside. Either way, you sacrifice comfort and safety within your own body, and sometimes it’s easier to just keep that pain to yourself and hope it goes away.

Amandla is nineteen. NINETEEN. I applaud Amandla for sharing her truth. Also, consider the ways this might help others feel brave enough to confront what they, too, have survived, and how it adds a relatable voice for young people to the complex conversation about why victims don’t immediately jump up with their hands in the air, eager to testify, the way society seems to expect. Thanks for speaking up, Amandla. Thanks for your guts.

The Charmed Reboot is Nigh