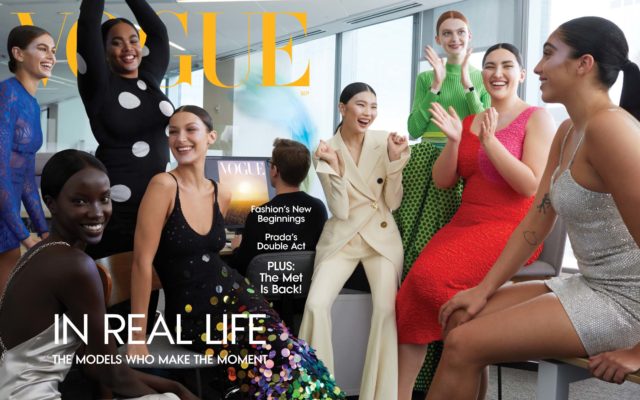 The September Issue leads us by the hand into New York Fashion Week, so Vogue gave its cover to a cadre of models under the umbrella of, “The Models Changing an Industry.” The accompanying article tries to make several points, the most salient of which seems to be the idea of Instagram and a social media following carrying a tremendous amount of weight — the idea of models as personalities, rather than paid mannequins; of them as activists and change-agents rather than ciphers. (It also attempts to dis and discuss the homogenous past of the industry while dancing around its own culpability in propagating those norms.) There are a lot of nuggets to chew on, as casting directors and designers discuss wanting to cast people who stand for something, or push for something, or who connect with the audience because they have a story to tell (or look like they do). But it’s undermined somewhat when three of the seven models are famous because of their parents or families, and when you fold it in to just the newsstand cover, it’s two out of four.

I’m not trying to say those particular women don’t stand for anything, or are only their DNA. But by and large, Kaia Gerber didn’t get a toehold in this industry because people saw her face and wanted to know more; it’s because they already knew she was Cindy Crawford’s daughter, and she has famous friends. Ditto Bella Hadid, sister of Gigi, both of them famous because of their mother Yolanda’s reality TV stint. Social media absolutely played a part in their omnipresence, but so did their lineage, which built the ladder up to their platform. And while Lourdes “Lola” Leon may claim that she has not “had everything given to her” just because she’s Madonna’s daughter, the fact remains that she’s Madonna’s daughter, and everyone knows she’s Madonna’s daughter, and she cannot remove herself from that reality no matter how easily she claims she can slip into anonymity in Bushwick. (I’m sure it’s more like: The people she runs with don’t make a huge deal out of it, and everyone else just lets her go about her day, even if they are thinking, “Oh, shit, that’s Madonna’s daughter.”) Nepotism in one form of another is inextricable from their careers in modeling, and that is the oldest chapter in the book, not the newest. It is revolutionizing nothing. So it’s bizarre to put them here with the other models and try to draw any kind of parallels between their ascents.

I can’t quote in bits and bobs from the piece, so I’ll leave you with what I think its thesis was:

On the other hand, it’s insufficient to describe the radical makeover of runways and magazines in terms of diversity and inclusion—words that can carry a whiff of tokenism about them. What stands out about the women on this cover is that they’re not reducible to kind; each is a unique superstar with her own story to tell, of which her beauty is merely a part. That’s the breakthrough we’re witnessing: the transformation of the model from object to subject. For the first time in history, she is meeting our gaze.

Salient observation, or reductive dismissal of the power of, say, the 1990s supermodel? Did Cindy and Naomi and Tyra and Linda and Emme and Christy fail to meet our gaze, and fall short of being unique superstars, simply because they didn’t have social media? Were Twiggy and Janice and Beverlys Peele and Johnson and Sherri Belafonte and Christie Brinkley mere eye-candy, “reducible to kind” in a way that made them object, not subject? Is Gisele Bundchen going to punch a window at the notion that Kaia Gerber is somehow making a mark on this industry that is more interesting than hers? To me, this is word salad, and I wish more space had gone to Precious Lee and Ariel Nicholson — the first trans model to appear on the mothership’s cover — than to Lola or Kaia or Bella Hadid’s anxiety about being famous. The good news is, the focus isn’t entirely on any ONE of them, so it isn’t just another Kaia/Bella profile dressed up as more. But “Kaia reads books backstage and likes to talk about ideas” and “Lola has forged her own path” are neither interesting nor specific enough nuggets for them to hold their own in the group piece — much less, as Bella is, be the center of its cover art.

Jennifer Hudson Opted for Purple Glam at the Premiere of RESPECT