This is a royal wedding I was totally unfamiliar with, and I appreciate the person who suggested we rewind to this event, because it’s very interesting and also educational. Picture it: The year is 1963. The place is Sikkim, which is currently one of India’s states but which was once a little more complicated. Per Wiki:

Sikkim is a state in northeastern India. It borders Tibet in the north and northeast, Bhutan in the east, Nepal in the west, and West Bengal in the south. Sikkim is also close to India’s Siliguri Corridor near Bangladesh. Sikkim is the least populous and second smallest among the Indian states. A part of the Eastern Himalaya, Sikkim is notable for its biodiversity, including alpine and subtropical climates, as well as being a host to Kangchenjunga, the highest peak in India and third highest on Earth….The Kingdom of Sikkim was founded by the Namgyal dynasty in the 17th century. It was ruled by Buddhist priest-kings known as the Chogyal. It became a princely state of British India in 1890. Following Indian independence, Sikkim continued its protectorate status with the Union of India after 1947, and the Republic of India after 1950. It enjoyed the highest literacy rate and per capita income among Himalayan states. In 1973, anti-royalist riots took place in front of the Chogyal’s palace. In 1975, after the Indian Army took over the city of Gangtok, a referendum was held that led to the deposition of the monarchy and Sikkim joining India as its 22nd state.

There’s nothing like marrying a prince and then getting deposed — as the rulers at the time of the deposition of said monarchy were our bride and groom here, Palden Thondup Namgyal and Hope Cooke. She took the kids and went to New York five months into her husband’s subsequent house arrest and basically never came back. They were having issues anyway, as they both had had affairs and he also seems like he was somewhat difficult — at one point, he threw her record player out a window, and he had a drinking problem. He shortly thereafter ODed on barbiturates, but did not die, and they eventually got divorced in 1980. I STRONGLY recommend you read this New York Times review of her autobiography, which I now want to read, as it is eyebrow-raisingly interesting.  Hope Cooke has led a life right out of a Judith Krantz novel. (She’s still alive and kicking around Brooklyn — or at least she was as of 1993, per this ALSO very interesting New York Times piece about her walking tours.) (I mean, she is definitely still alive. She simply may have moved.)

The short background: Her family was awful; Her mother died when the plane she was piloting solo crashed (perhaps intentionally) and her father subsequently bailed, so Hope and her sister and a series of extremely mean governesses lived across the hallway from Hope’s (also mean!) grandparents. She and the Crown Prince met and fell in love when she went on a summer trip to India at 19. They bonded, it is implied, because they were both sort of sad souls; he was a widower whose childhood was also fraught, in no small part because, as Wiki puts it, “his plans to study science at Cambridge were dashed when his elder brother, the crown prince, a member of the Indian Air Force was killed in a plane crash in 1941.”  (Surely their shared history of family plane crash tragedy helped bond them, if nothing else.) After the wedding, she was embraced as — as the NYT puts it — the “Grace Kelly of the Himalayas” until the deposition of the monarchy, at which point Newsweek allegedly switched the metaphor to Marie Antoinette. (A burn that I’ve read reported in various articles in other publications but couldn’t find in its original source; I do feel confident that the turn of events upending the monarchy in Sikkim was probably not wholly about her spending.)

The Washington Post, in a very interesting piece dating from around the divorce, writes of the wedding:

From the beginning, though, it was the oddness that danced a dark shadow over her chances for happiness. Bad enough that her husband waltzed his other conquests in front of her on their wedding day, worse still was her sister-in-law, the elegantly beautiful, haughty Cocoola, who remarked on the eve of her wedding how inauspicious it would be if anything were to break, and then broke a saucer, scattering the millet seed it contained, a bad sign in itself. “Worse still,” Cooke writes in her autobiography, “Time Change,” “the more I look[ed] at the brocade pattern of my wedding dress, the more it seem[ed] that it had been stitched with the wrong side exposed. In Sikkim, a sign of death.

Still, she lit the butter lamps in front of the images of Buddha and Guru Padmasambhava and offered a long white scarf to her father-in-law while 12 ambassadors, including John Kenneth Galbraith, and half the world’s press looked on. The wedding festivities lasted a week.

You can see that ritual with the scarf here: 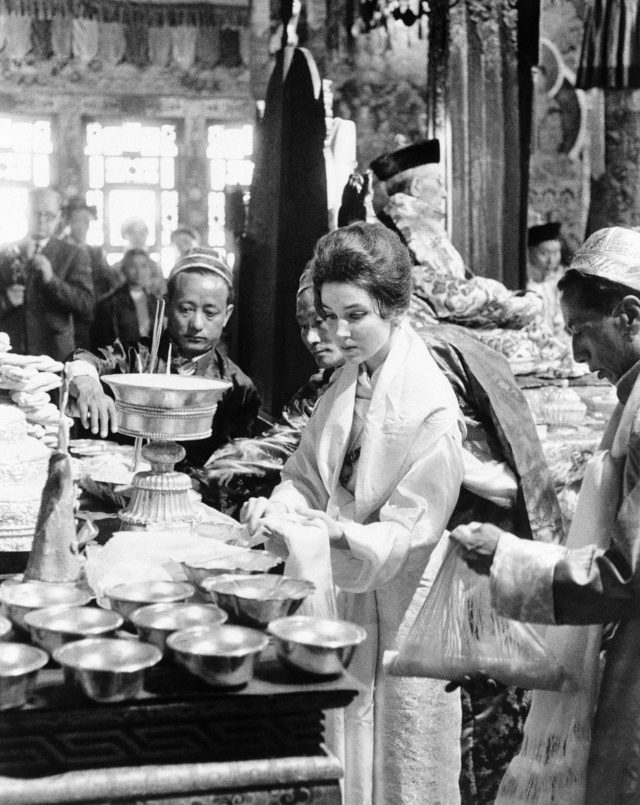 There aren’t a ton of photos of this wedding beyond these two, which is a shame, as it looks like it was a very interesting ceremony. There is however, British newsreel footage that feels pretty comprehensive:

If only it were in color!