And so we’ve arrived at the end. And I have THOUGHTS.

First, the other plots:

Rory and Logan: After Logan — having been effectively dumped, but still clearly in love — and his Ship of Fools sweeps her off her feet for a big cheer-giving adventure, Rory finally realizes that she needs to stop falling back on Logan. For good. Especially because he will never shake off his family’s expectations and stand tall and choose her. (Never mind that he wanted to marry her once before; he seemed to choose her then. Am I forgetting something?) So she gently calls this what it was: a last hurrah. Logan looks devastated, but also accepting, as if he knew all along it was only a matter of time. Rory can now hopefully leave Logan behind, where he will fester, forever a man-baby who gets off on doing what daddy wants specifically so he can resent him for it — and thus absolve himself of having no specific aims in life of his own. He does first offer her a place to write in Maine, but she says no, because she’s got a better one: the Gilmore house, now sitting empty while Emily prepares to sell it and move to Nantucket. Speaking of…

Emily: She’s selling the house and moving to Nantucket. We see Ray Wise with her, but it’s unclear whether she’s ACTUALLY dallying with him or they’re just friends. It’s beside the point, anyway, because he’s more of a red herring than anything else. Emily moving on is about Emily coming to a peace, and nothing else. And where she finds it is AMAZING: in a whaling museum, where she was sufficiently uninspired by the docent’s presentation to the point that she gets a job there and turns their tales into grimly fascinating stories of woe. It’s perfect. I would go there every week.

Lorelai: “I feel like I’m standing still. Like the whole world is moving and I’m standing completely still,” she tells her fellow Wild hikers. Her adventure turns out to be less about Luke, or her career, and more about unlocking both her grief and the memories of Richard that allow her to exorcise that grief and start to heal. It ends with her calling Emily to tell her a story about a day when she was 13 and got dumped publicly, which prompted her to ditch school and go cry at the mall. Richard found her, and instead of yelling at her, he listened. And then effectively put her in his pocket and pieced her together with an afternoon at the movies — a very dad-ly memory of a guy who wasn’t a big talker but still had a big heart. It’s all rendered in one continuous take, if I remember correctly, and it’s wonderful. In some ways, Edward Herrmann’s very Edward Herrmann-ness hurt both Richard and Lorelai as characters, because Richard was a tough nut and he did make life tough for Lorelai (as she did him), but Herrmann’s innate teddy-bear awesomeness makes it so difficult to imagine that he ever really hurt anyone that you just want to hug him and blow off Lorelai’s issues with him. Please note: Those are the ramblings of someone who hasn’t re-watched the show, so I could be blotting out something vital. And I would NEVER replace him as Richard, ever; I just mean that he’s so damn stirring and likable and great as a presence that sometimes it was hard for me to cut Lorelai slack that she probably deserved.

Anyway. The monologue is the story she should have told at his wake, and we’re meant to think THIS was what she hadn’t yet realized she needed to unlock. THIS was the epiphany she sought; this was the closure so she could move forward. It was a long detour to get here, but a wonderful scene.

Luke & Lorelai: She returns home, and they get married. To be honest, this whole story never tracked for me. I guess the idea is, Lorelai didn’t know what her blockage was, and it turned out to be grief? But the show flirted with all kinds of relationship ennui that seemed pretty justified, only to sweep it off the table here. It makes me think they simply wanted us on false tenterhooks about this couple’s fate, and ergo, they didn’t spend all that much time enriching any of it.

The ending: I should note, which I may have mentioned before, that I am not one of those people who pillories the producer(s) that took over in season seven. History has gotten twisted a bit to fit the narrative that the show was perfect until the Palladinos left, and then the Big Bad Wolf came in and blew down the house with his death breath. In truth, Gilmore Girls had its faults and missteps long before that day — Rory did not sleep with married Dean in season seven; Luke did not get a surprise child that year either, to name two — and the new team that came in was faced with an unenviable and very specific task. While I have no insider knowledge, and maybe the new team was, in fact, Satan’s back hair personified, I tend to think everyone had good intentions and wanted to make it work — even if, in the end, it fell short at times for some people.

So it’s always seemed deeply disingenuous to me that Amy Sherman-Palladino spent so much time badmouthing the series ender, and mythologizing her own Four Final Words and the tragedy of her never getting to write them. It undercut both the show and the actors she left behind (regardless of the circumstances of her departure), while whipping up a self-serving frenzy. So the mere concept of the Four Final Words, and the ensuing fetishization of them, irritated me long before they announced the reboot. But I had high hopes, because I really did love season one, and that’s when ASP and Dan claim to have created this vision. I decided to trust that their greater instincts were at play here. I say that just so you’ll know that while the whole to-do about the words annoyed me, I went into this — much like the season seven showrunner, I guess — with good and positive intentions.

My fundamental issue with those words is, I never wanted Gilmore Girls to come full circle.  It always seemed to me that everything Lorelai did — particularly, in the pilot, crawling back to her parents for the sake of Rory’s education — was in service of trying to give her child a bigger life. A future without the constraints or constrictions Lorelai faced as a broke young mother. (Please let me be clear that I don’t think young mothers are by definition constrained; merely that I think Lorelai’s particular motivation, as defined by this show, was to give Rory the world that Lorelai herself was not able to seize.) She raised Rory in a tiny protective cocoon, tried to be everything to her child, had to eat crow when she realized she couldn’t achieve that without help, and — whether you sympathize with Lorelai or not — exhumed a few personal demons and had to live with them in order to achieve that aim. Like her or not, Lorelai gave herself over to Rory so that Rory could aim for the proverbial stars.

So through that lens, coming full circle isn’t a warm and fuzzy or sweet ending, because it means the central conceit of Gilmore Girls was always this: that Lorelai would have failed. Be it Chilton and Yale, or Stars Hollow High and ITT Tech, it was apparently Rory’s fate to follow in Lorelai’s footsteps and wind up young and pregnant and with a huge, scary decision to make. Rory uttering those words at 22, and having it be the masterplan the whole time, means Gilmore Girls in retrospect becomes a story about how none of what Lorelai did mattered.

Rory uttering the words at 32 could have been more effective if the Palladinos had allowed her to grow. The biggest problem with this reboot is that it appears to treat at ten-year gap as cavalierly as if it were one year. Rory’s backstory is a bunch of blanks. We have no idea how covering Obama went, or when her career started to sputter, or why she’s acting like her development was arrested the second the credits rolled on the final episode of season seven. That intervening decade happened, and it should matter; it should have weight, and consequence, and left its imprint in ways both big and small, on Lorelai and Rory and Luke and even Emily and Richard, beyond merely his death. The proper development of ten years of baggage might’ve given Rory’s “I’m pregnant” the right heft. If the show had allowed Rory to do exactly what Lorelai hoped — make different choices, use the tools and the opportunities she was handed to blaze her own trail — then she could’ve reappeared a fleshed-out, fully developed Rory. And that girl ending up pregnant, if it still felt true and right and not just like retrofitting for the planned last utterance, would at least feel less “second verse, same as the first.”

But Gilmore Girls doesn’t seem to be built that way. It wants Stars Hollow to live as it does in perpetuity, a vibrant little snow globe of a world that simply does lather-rinse-repeat; for that to work, then Rory and Lorelai have to be consigned to their temporal loop, and never truly embrace a life or a fate outside its walls. Ergo, at 32, Rory is not the version of herself who could make “I’m pregnant” an interesting twist. Rory at 32 is Rory at 22, is Rory at 16. She’s the exact same girl, with just a few more birthdays behind her. She hasn’t self-actualized, and in fact because of her book project, she’s steeped deeper and deeper in the past that she’s now echoing.

Therein lies the difference between this ending and the way season seven ended. That journey was nor perfect; neither was this one. But what the oft-demonized non-Palladino showrunners did was provide us an ending tinged with the warm, gentle optimism that suffused Stars Hollow on its very best days. Somehow, via its slipshod plotting and the look of fear and dread on Rory’s face, this new Gilmore Girls and its fated Final Four Words took the potential optimism of a Rory pregnancy — a new and earned beginning, a daughter ready to give of herself the way her mother did — and turned it into a moment that felt like rock bottom. And to me, that’s not fair to any of them — to Rory, to the baby, to Lorelai. Maybe especially to her. 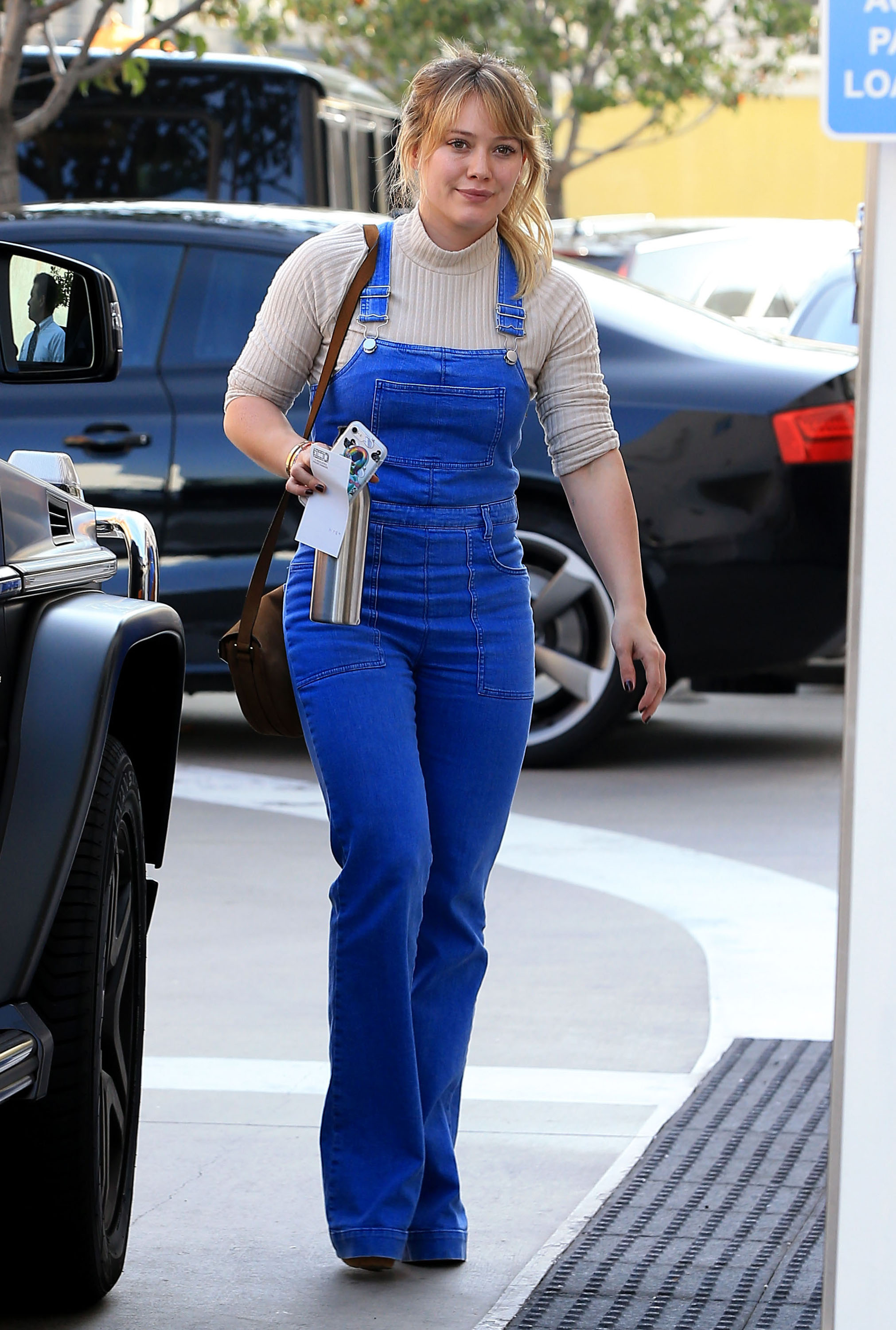