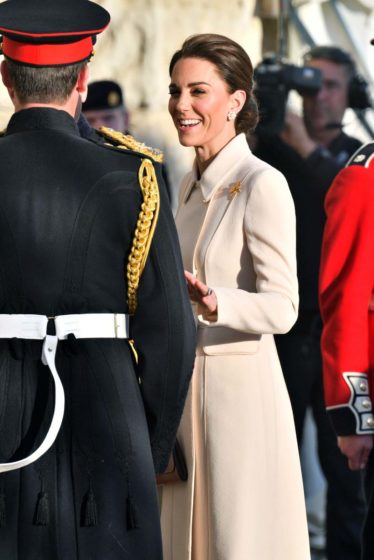 It’s so satisfying when my Post-It that says KATE MAYBE SOMETHING THURSDAY????? proves to be correct. Today, Kate came out for something called Beating Retreat, which is a ceremony that is traditionally held before Trooping The Colour (which is on Saturday), and which has an informative Wikipedia page. Basically, it’s a ceremonial concert with bands and cannons and horses and marching and people in feathered hats and interesting uniforms, and Kate is doing what they call “taking the salute,” which just means that she, you know, waves back when the Household Division salutes. (I don’t think she actually literally waves. Town & Country says she “acknowledges” their salute.) Anyway, Kate looks super reasonable and very neutral of hue — I do enjoy a cream-colored coat — and I feel interested in the fact that this look did not call for a hat. (Although I think she looks fine without one, generally speaking, I just would have expected one. Admittedly, I don’t even totally know why I felt that way?) Let’s discuss!

EDIT: It’s not a new coat! I totally forgot that she already owned this one. I’M SLIPPING.

We do also have some video, as ever:

It’s night TWO of the military music extravaganza and HRH The Duchess of Cambridge has arrived at Horse Guards to take the salute! @Householddiv #BeatingRetreat @KensingtonRoyal pic.twitter.com/zdea2xBRt7

London sure is pretty at golden hour in June:

HRH The Duchess of Cambridge is tonight’s Royal Guest of Honour at Horse Guards Parade as the massed bands perform at #BeatingRetreat 2019 ahead of the Queen’s birthday. pic.twitter.com/XHSyBeTnyC