Claire Foy Gets Regal in Venice Claire is in Venice for the premiere of First Man, which is Damien Chazelle’s follow-up to La-La Land, starring Ryan Gosling as Neil Armstrong and Claire as his wife Janet. The More You Know. Anyhoo, Claire is sporting a supremely dramatic Valentino which Jessica originally picked out for Natalie Portman. Is it possible to love it and also find it ridiculous? She looks like she teleported here from a hot galaxy and got very bad information about scarves. But I am not super drawn to the dress underneath it, so the scarf-poncho-shawl — scarchowl? — is basically giving the whole thing life; it’s teeming with personality and she’s carrying it well, so WHY NOT. Live and let scarf.

For the photocall, she chose Chanel: It’s… fine? It could be worse. It so often is worse. I wonder if the stripe motif appears one too many times? Maybe collar and hem and one other would’ve been better. It’s also carving her chest into a hard shelf. But her head looks superb, and with apologies to my own boobs, if I personally had to choose between the two I think I would prefer my face looked great. 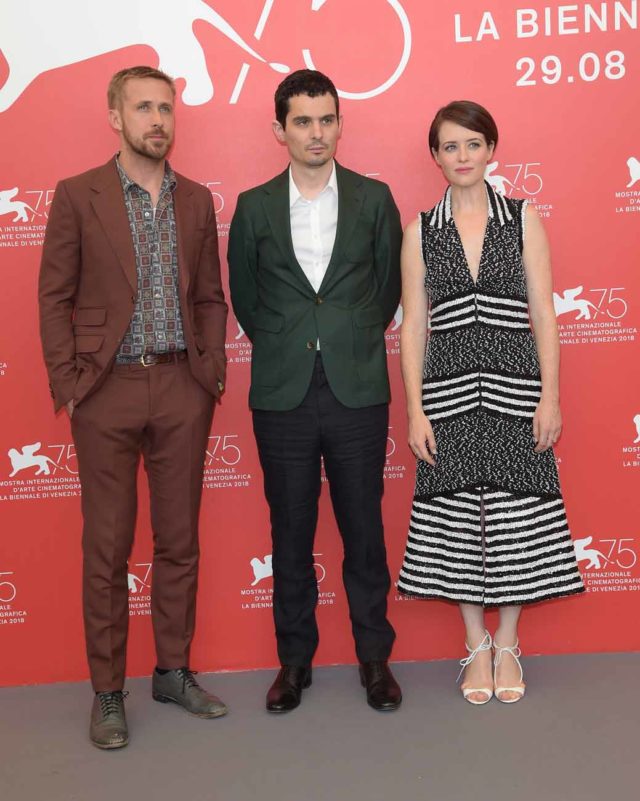 Damien’s jacket is too small, though. And Gosling… the golden dye job makes him look like he’s prepping to play Philadelphia Eagles quarterback Nick Foles, the man who nearly quit football, got a call to come back and try once more as a QB2, and then ended up taking the team to a Super Bowl and winning it. I’m sure some schmaltz-peddler will call it Flight of the Eagles or Nick of Time, but my bid is Know When To Foles ‘Em.