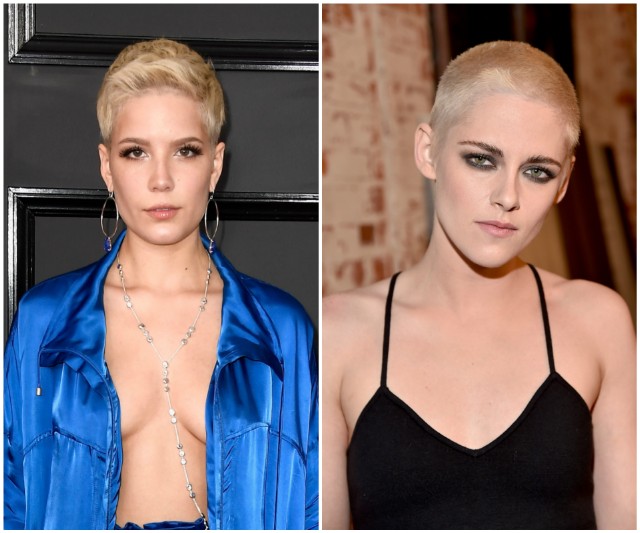 For those of you who weren’t keen on Kristen Stewart’s floppy, dark-rooted coif, rejoice: She’s shorn herself, and doubled down on the platinum. I have to say, Kristen’s face is basically an America’s Next Top Model dream. That show cannot exist without bleaching the life out of someone’s hair and/or chopping all of it off, and Kristen here has made both of those things work. Kristen can, I think, carry just about any hair color she’s tried (probably because she’s not afraid of the eyeliner some of them demand), and so I have to admit that I think this looks groovy on her. She’s very nearly doing Michelle Williams better than Michelle Williams has been; she and Halsey are both pretty much rocking this, and I feel robbed that a resplendently cheesy Lifetime movie will never come of this. I Dated My Doppelganger: The Kathy Paige Kellerman Story would be mad juicy, and best of all, perchance offer a role to Meredith Baxter Birney. I’m in.

As for Kristen’s entire outfit: It’s a sports bra and a corseted wet suit. It’s only been two days, but that enormous zipper already has me dreaming of more cheerful times when people just wore accessories as shirts.