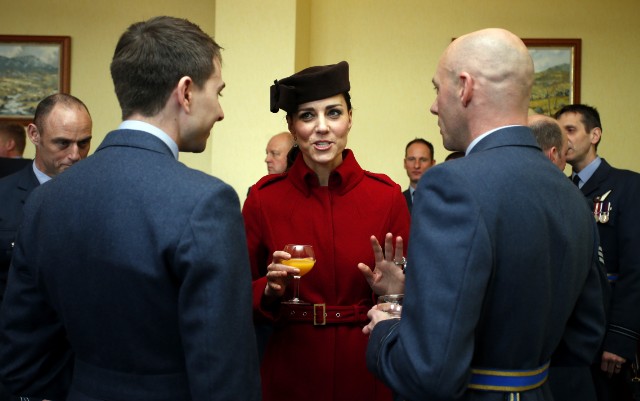 This week’s Royals Round-Up brings you the return of Maxima, some wacky hats, a SOLID Rando Royals Wikipedia Deep Dive, and all the details from Wills and Kate’s outing yesterday, which I was unable to bring you in a more timely manner because I was on a plane when the photos all came in. More for today, right?

– While we’ve got you here, I’m sure you’ll hear more about this from us in the next few months, but The Royal We comes out in paperback in a couple of months, and it’s available for pre-order NOW. Can I entice you by noting that it has a bonus chapter? (It’s not new plot, but it is a look at an event in the book from the POV of another character.) (It also has a new cover for the paperback, so if you were in love with the hardback cover…FYI.)

– The Royal We is the book club pick this month for Forever Young Adult — despite not being a YA book! We got a special dispensation — and they actually made us our own cocktail.

– The Court Jeweller has an interesting piece on the on-going discussions of whether or not the Koh-i-Noor should go back to India.

– At Order of Splendor, an interesting tidbit on Imelda Marcos’s Cartier tiara, which is going up for auction. (Don’t worry; I know Imelda is not royalty, but you know. Tiaras. Of interest.)

– Good lord. OK! says Kate is pregnant again. Let me be clear: OK! will never, ever EVER EVER get the scoop on this. Anything you read about Kate in OK! is literally complete fiction. If that news is ever leaked — doubtful, because the W&K set is famously close-mouthed — it’s because someone sold the story. And no one in a position to sell that story would go to a third-tier US tabloid. They’re going to the Mail, or the Sun, or even People.

– Speaking of the DMIK, this made me laugh. I apologize: “The entrepreneurial younger brother of the Duchess of Cambridge is moving to Hong Kong next week to expand his personalised marshmallow business Boomf.” As one does!

– At People, a sweet story about Wills and Kate’s trip to Anglesey on Thursday — that is, as Kate put it, where they started their lives together.

– Also at People: The Reluctant Royal! Belgium’s Prince Laurent Says: ‘I’m Tired of Being a Prince’ You don’t even have that much prince-y stuff to do, dude!

– Speaking of people who are very possibly not that thrilled with duties demanded of a role they were born into, this was a very interesting read at The Guardian: The Sun gives both barrels to Prince William. This is something I find fascinating. If you’ve read The Royal We, you know it’s actually something we get into a lot in the book: Wills has a LOT of privileges but he also has very little choice about how to live his life, all because of to whom he happened to be born. The only option is to suck it up, basically — and, yes, yes, yes, I know: he’s got plenty of money and lot of advantages and I am not discounting that at all. But I think that if you are born to be king and haven’t the constitution for that kind of life, one that also requires your child to be in the exact same situation, it would be a recipe for resentment (especially if you perhaps privately think the monarchy is a relic, and that the role of king will be essentially meaningless by the time it gets to you). I personally think the best option is to go the Princess Anne route and work your ass off for charities that are meaningful to you — you cannot undo the family into which you are born — but I also think that if you are Prince William, you’re born into a construct that is designed to make you spoiled and then asks you to be utterly selfless. It’s got to be kind of a mindfuck. (And I’ve got like 486 more pages of thoughts where this came from!)

– In related news, it seems like there’s a case afoot for Anne:

Delighted to welcome HRH The Princess Royal to our head office in Leatherhead pic.twitter.com/dxmoVHMxps