At last, we’re at the Coronation! Things to discuss:

a) I do think that the show has made the executive decision that, as the title says (and we’ve discussed at length), this show is about the crown, hence the focus to date on the Duke of Windsor (a.k.a. the man who gave it up) at the expense of, say, exploring Elizabeth’s relationship with her sister or her mother or anyone or anything other than her spouse. And while I guess that info WAS right there in the title, it also isn’t exactly where I expected this show to go. I know that we’re going to get a bit more Elizabeth/Margaret stuff later and I look forward to that, but… this episode is the midpoint of this season. Related:

b) We’ve discussed whether or not the show wants the audience to sympathize with the aforementioned David/Edward, and I… still don’t know the answer to that. I think he could be made a sympathetic figure (if you, you know, forget about the Nazi bits), and certainly a romantic one, but you don’t use his EXTREMELY NASTY letters back home to Wallis if you’re going in that direction. I personally find him horrid and keep hoping he trips over one of his pugs and falls face-first into a bush. Wallis can announce that he gave up the crown for love as often as she wants — he did; it ought to be highly romantic! — but it’s hard to reconcile that with his constant, on-going petulance about his family’s (reasonable!) irritation over that choice.

c) While this episode’s Big Climatic Fight with Liz and Phil was really enjoyable — when she told him she’d acquiesce to some of his plans for her coronation (about which he was correct) if he’d kneel to her (about which she was correct), I clapped with delight — this show has kind of dropped the ball in terms of making us invested in their relationship. There are interesting parallels to be drawn between the Duke of Windsor (the man who sacrificed the Crown for love) and Prince Philip (a man who sacrificed his personal autonomy for service of the Crown, ostensibly also for love), but the show isn’t going there and I am confused by that artistic choice. Some of it has to do with the fact that Philip and Elizabeth don’t actually appear to be in love — and this show seems to have no interest in telling a love story and, when they kind of try, as with Margaret and Peter Townsend so far, they don’t seem to know how to do it. (Suffice to say, I hope Peter Morgan hires someone else to write the William and Kate story once they get to that season, or I think they’re going to totally eff it up; I, of course, have a lot of professional opinions on this topic). The tension between Philip and Elizabeth would be a lot more satisfying and interesting if we believed that there were any personal stakes at all between them. Thanks to history, we know they’re still married, but you can certainly create internal relationships stakes if you create a believable emotional connection between them that, if destroyed, would be heartbreaking.

d) On the Philip tip. I fully get that being literally subservient to his wife grates on him as a man in the 50s — because the show will NOT shut up about this tragedy — but his consistent whinging about it is getting tiresome and it makes him look as if he never actually considered what marrying Elizabeth meant for him. Here’s my feeling: Either he didn’t fully consider what marrying her meant and he did it because he loves her, but now he’s realized that he’s in over his head — in which case we need to see more of their love story; or he doesn’t love her particularly but he married her because he thought it seemed like a good idea for other reasons (money, status, whatever), and now that’s crashing in on him and he’s stuck. Either of these options are interesting from a storytelling perspective, but the show doesn’t seem to be willing to go one way or the other, and the result is that he feels one-note. As written, Philip’s behavior really only tracks if you’re telling the story of someone whose wife’s ascension to the throne is a surprise — and this really really was not a surprise. So… I kinda don’t know what they’re doing with him. And now that one of you has pointed out that Matt Smith keeps his chin tucked in 100% of the time, that is all I can see. If you look at photos of Prince Philip, this is something he does in them — because he is looking at the Queen in most of said shots, and he’s much taller than she is. He’s not, like, walking around like this all the time. It’s a distracting actorly choice, and I wish someone had told him to cut it out.

ALSO, it seems we’ve run out of bare asses, which saddens me. Anyway! Much to discuss — this episode used its budget wisely; the coronation scenes are beautiful — so let’s not waste any more time.

And a general housekeeping note:  We have had a redesign, as you see! We covered the details in full on this post, but as a quick refresher for slideshows, read on: How do I read the captions on the slides? Keep scrolling down! The captions will magically pop up. And as for those graphics you’ll see to the right of the photo: The arrows are how you navigate the slides, obviously, but you can ALSO use arrow keys on your keyboard if you prefer. The box with the arrow poking out diagonally opens the photo alone in a new window. The the box with the FOUR arrows in it opens the full-size version of the photo, and the circle with the “i” inside brings the caption up or down immediately. (I like the gentle arrival via scrolling, but not everyone will.) You can also just click on any photo that you’d like to see ENORMOUS, which I just discovered by accident. Whoops! As for the little grid button, that’s how you pop out to a grid view of the thumbnails of every picture in the slideshow, if you want to jump around. If you don’t see any pics at all, it may be your AdBlocker; turn it off and see if that helps? (Which we’d appreciate anyway.) Thanks for your patience as we work out all the kinks and bumps! Taraji P. Henson in Celine at the AMAs 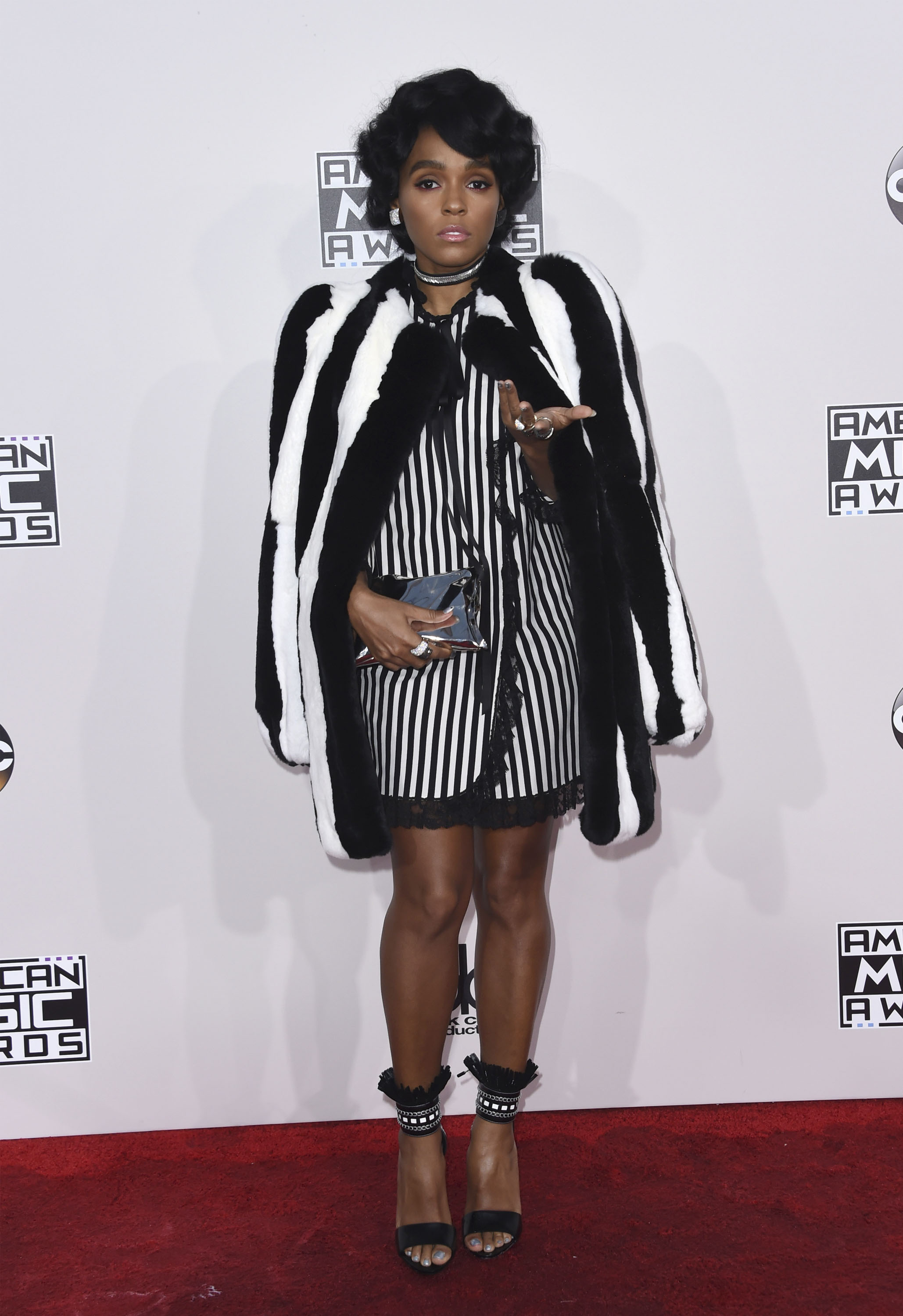 Janelle Monae in Marc Jacobs at the AMAs