While Claire Foy was off winning her Emmy and saluting the new Crown crew, that very group was at work. We’ve had Netflix-sanctioned glimpses of Olivia Colman’s Queen Elizabeth at her breakfast table, and Tobias Menzies as Prince Philip, but I think this is the first time we’ve seen Helena Bonham Carter’s Margaret — much less her and Colman together. They’re filming this at Winchester Cathedral; I wonder if it’s doubling for the Abbey. I suppose it also depends whose funeral it is. I’m unclear on the exact time frame of this section of the series, or whether they’re currently shooting season three, or have begun season four. But here’s my guess [Note: It’s apparently wrong]: Lord Mountbatten’s assassination was in 1979, which could feasibly be included in this two-season pack of episodes, and his funeral was at Westminster Abbey. So I’m laying my money there. The guy playing Charles should have a lot to rip into, as might Philip; Mountbatten was a surrogate father to Charles, and we all know Peter Morgan is the most enamored of Philip’s perceived Man Pain, which might come from being reminded that your son was a lot closer to that dude than to you.

Note: I didn’t know Morgan had said this season cuts off around ’76, so the prevailing guesses are the Duke of Windsor’s funeral or Churchill’s, in that order.

Anyway, Colman looks quite perfect. HBC has a touch of the pinched Windsor quality, I’ll admit. And I don’t actually know if they’re shooting in this scene, or just rehearsing — the woman behind them seems a bit less bereaved? — or ambling their way to set while clutching each other. But their shoes are certainly curious: 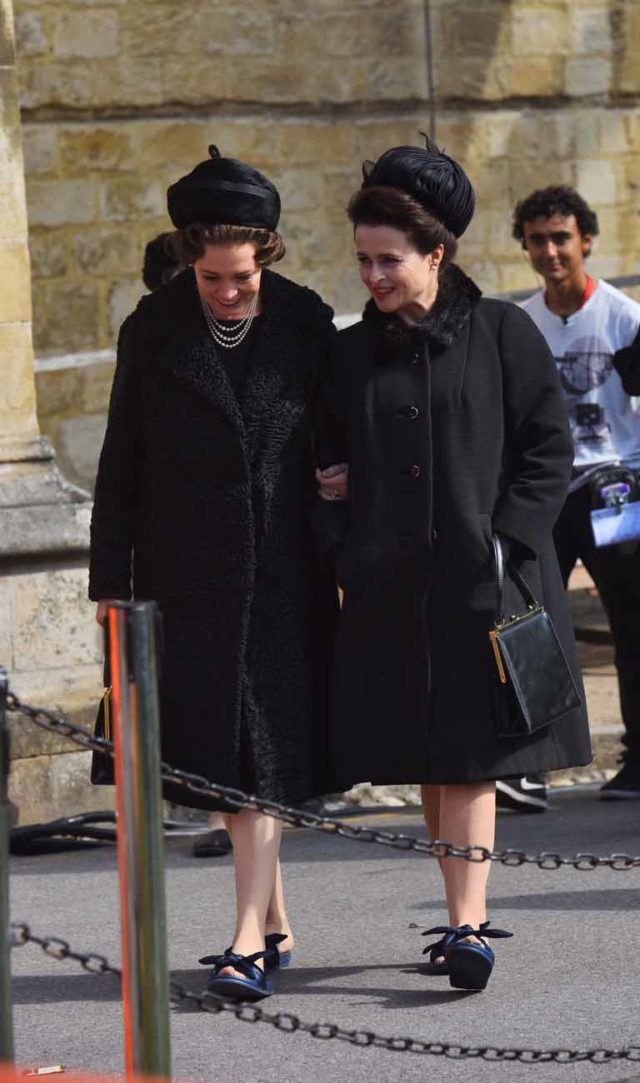 Okay, obviously THAT dude is not in the show, and those shoes CERTAINLY aren’t part of the costumes, so maybe the actresses are just on a stroll together or are running lines for later. I do find it entertaining that they have matching slippers for when their feet aren’t on-camera. I wonder if that’s because they need something that won’t rub or rip the nylons to shreds.