Very excited that our giveaways are back! And you guys love a well-costumed period piece where murders are solved! 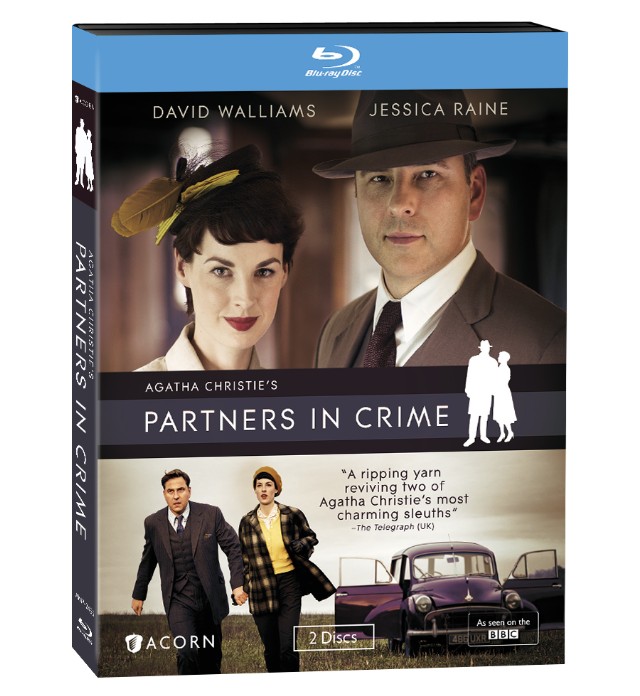 THE PRIZE:  One of you will win either a DVD or Blu-Ray (you choose!) of Partners In Crime. Want more info? I CAN DO THAT:

After decades of the much-loved Poirot and Marple adaptations, Agatha Christie’s delightful detective duo, Tommy & Tuppence, return to TV starring Call the Midwife’s Jessica Raine and Britain’s Got Talent’s David Walliams. Set in 1950s Britain, these gorgeously produced mysteries are jam-packed with period atmosphere and playful banter between Agatha Christie’s crime-fighting couple, which were her favorite novels to write.

Agatha Christie’s charming crime-solvers Tommy and Tuppence Beresford are an ordinary married couple living in 1950s Britain at the start of the Cold War. Sometimes bickering but always sweet on each other, they find themselves knee-deep in danger when they stumble into spy craft and end up being rather good at it. In The Secret Adversary, they search for a missing woman and a recording that could unmask a Soviet hit man. In N or M?, they must discover which person at a seaside guesthouse has stolen a nuclear bomb. Each thrilling adventure abounds with humor, international espionage, visual flair, and chic period fashion.

Agatha Christie is known throughout the world as the Queen of Crime. Her books have sold over a billion copies in English with another billion in foreign languages. She is the most widely published author of all time and is outsold only by the Bible and Shakespeare. She is the author of 80 crime novels and short story collections, 19 plays, and six novels written under the name Mary Westmacott.

Includes two behind-the-scenes featurettes about the making of the show and the costume design (89 min.) an interview with Clarke Peters (25 min.) and a photo gallery.

THE TASK:  As always, I will pick the winner at random. But to keep it fun, please comment and tell us which actor or actress with whom you’d most like to be in a marriage/crime-solving partnership. I pick Chris Evans!

THE RULES: All entries must be posted in the comments of this post by 9 p.m. Pacific time on Monday.  FYI, if this is the first time you’ve commented here, the system will automatically kick you into comment moderation, but don’t worry, I will rescue you.  (Prizing courtesy of AcornTV. Open to US and Canada mailing addresses only. Thank you!)