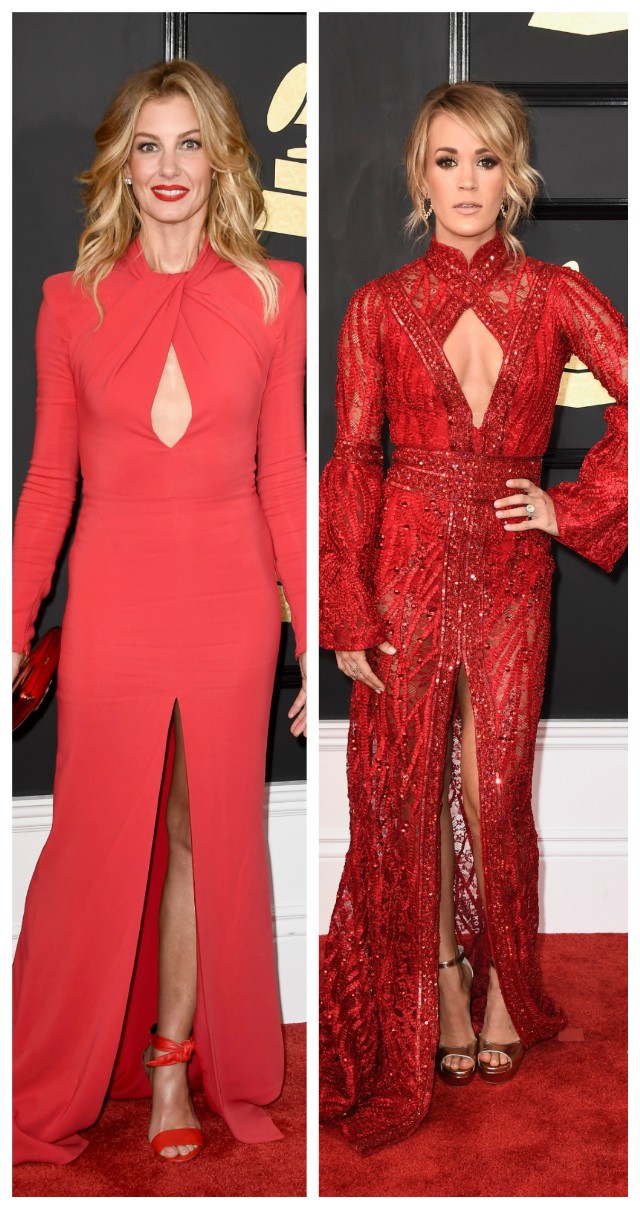 Well, well, well, it’s the Country Queen versus her blonde heir apparent; the Ghosts of Sunday Night Football Past and Present, both at the Grammys in outfits that are similar — possibly uncomfortably so, if the two of them aren’t tight. (I know nothing in that regard, but part of me thinks that if they were pals, they’d have posed together on the red carpet in a jokingly hair-pulling kind of way. The other part of me just really likes ALL kinds of drama, so… wait, those might be the same part.)

Let’s tip our hats to seniority, and begin with Faith, who’s been waitin’ all day for Sunday night: This is a perfectly nice dress, but it’s pulling uncomfortably. And Faith Hill is a tiny person, so what size this dress must have been in order to look too snug on her is probably a number I cannot comprehend. It probably wasn’t a number; more like a null. I want to think she looks terrific in it, but… had it been sleeveless, that might’ve solved a big enough part of the problem that the rest would’ve been fine. The keyhole, also, feels weird, like we SHOULD be able to see some cleavage instead of it shoving her boobs each to one side.

But it’s also hard for me to judge it clear-headedly because when I look at her all I can remember is her interview with Ryan Seacrest, during which Faith here seemed… See, my grandparents knew their way around a fun night out; when he was past eighty, my grandfather took my sister and her husband out for some cocktails, and when they got home hours later he wanted to call the wing of our family that’s in New Zealand, to which my grandmother shrieked, “Nobody’s calling anyone, Bill, you’re crocked!” Let’s just say that on this night, by all appearances at least, nobody was letting Faith call New Zealand (and all I could hear was my sister’s voice retelling that story). When asked who she was wearing, and given multiple subtle prompts by producers, Faith could not have found the words “Zuhair Murad” with a flashlight and a map and a spell-checker and a sign that said “Zuhair Murad.” (Which, frankly, sucks for Zuhair Murad, a company that likely let her wear this for free and/or paid for the right.) 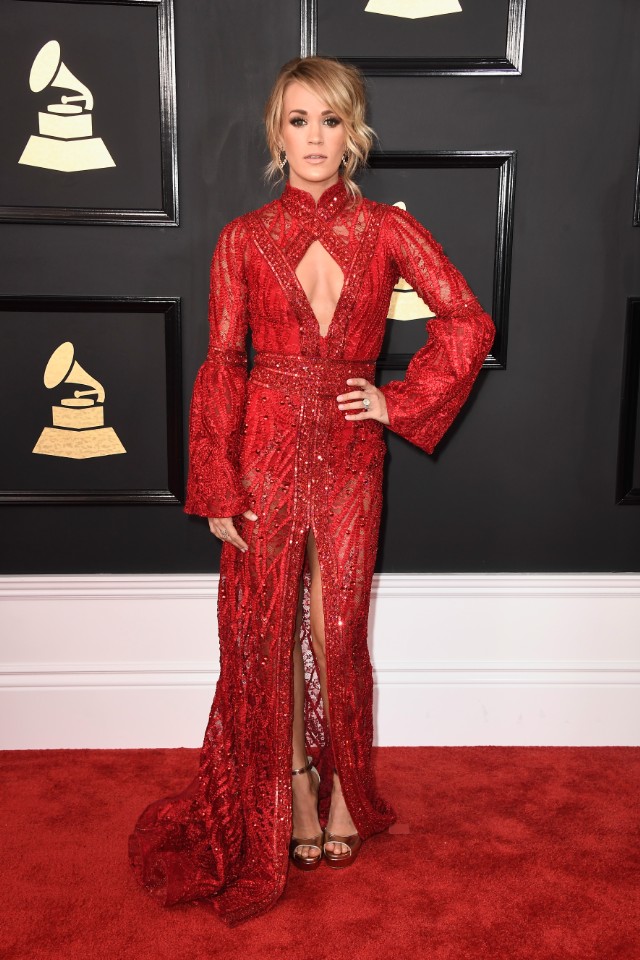 This is by Elie Madi, which even SOUNDS like the mash-up of Zuhair Murad and Elie Saab that the dress is. Carrie wins for the depth of the hue and all that sparkle, and also the smoother fit; her peekaboo spot also seems to have landed in a more flattering place. But she’s losing points to Faith for her weak makeup game and the fact that we can see her underwoods. The sleeves are also an issue: Faith’s were too tight, but Carrie’s, too vexing. Although useful for sneaking in a split of Champagne. It’s unique, that’s true, and it’s trying. But there is just so much happening here. I feel like two design decisions, at the very least, needed to be subtracted.

It’s a tough call for me, but I think personally I’m giving it to Faith. She took something sleek that wasn’t perfect, but she sold it with her head, whereas I think Carrie let this thing railroad her. Maybe she should have waited a little longer for Sunday night, eh?

Grammys: Oh Yeah, Adele Was Also There, and in Givenchy