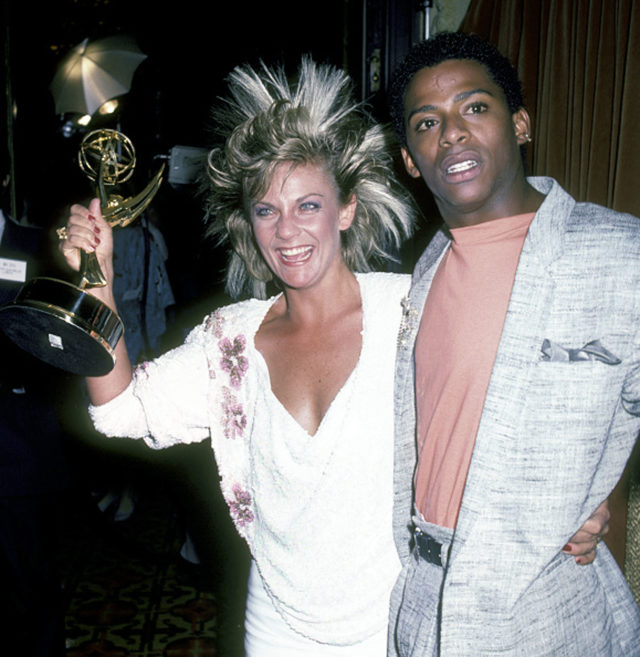 No, like, I need answers. Here, we are at the Daytime Emmys, circa 1985, where Kim Zimmer won the first of four Emmys for her (ICONIC) role as Reva on Guiding Light. She is accompanied in the top pic by Darnell Williams, who looks both dreamy and perplexed as he hold his own Emmy, won for his (ALSO ICONIC) role as Jesse in All My Children. I did not watch a ton of Guiding Light, but I watched a LOT of AMC and therefore I can tell you that Darnell Williams was AMAZING in that part and I will never forget being at home on summer vacation and sobbing over Jesse’s untimely death. (And also of course it later turned out….he wasn’t dead at all!!! This is especially amazing given that his ghost HAD been visiting people while they were in comas to give them guidance and whatnot. I don’t know how he pulled this off, given that apparently he’d just faked his death because a crime lord was after him.)

And, having said that, I can treat you to this EXCEPTIONAL and somewhat confusing paragraph from Reva’s Wikipedia entry:

Reva Shayne has been the focus of various situations throughout her life in and outside of Springfield, Illinois. She has been married nine times to seven different men, has been diagnosed as a manic-depressive, presumed dead various times in which she lost her memory and thought she was an Amish woman and lived the life as a princess, undergone a battle with Dolly, a clone who attempted to overtake her life after her husband allowed a reproduction of his wife after she apparently died and traveled through time. A memorable event that led to her presumed death was when she drove off the Bahia Honda Bridge in the Florida Keys, yelling, “I’m coming, Bud!” in 1990. Some of the more sensible areas of her life has been her career as a business executive and talk show host. Reva’s biggest battle was when she was diagnosed with breast cancer and suffered from the ordeal again during her pregnancy with her son Colin although she had [previously] been diagnosed with menopause.

Those ARE some various situations! I just need to say that someone making a clone of his presumed dead wife, and then the wife comes back and the wife and the clone hate each other….chef’s kiss. That is brilliant work. I am not being sarcastic. That is such a good idea.

Look, at least the 1985 Daytime Emmys looked like a hell of a party: But I do still need some hair answers. I was a sentient human in 1985! (Albeit a child.) And we did some stuff with out hair! But this is something else!

How To Get Away With Fashion Murder