I mean, that is a terrifying fact to have to confront, Mrs Palmer is not wrong about that. Other things she isn’t wrong about: The importance of buying enough booze at the market, how off-putting it is when your local gets in new beefy jerky, the freedom of not giving an eff. In the wrong column: The fact that she still has that terrifying ceiling fan.

Let’s begin with What The Hell Is Happening With The FBI Since Matthew Lillard’s Head Exploded? Honestly, not as much as you’d think, given what’s on their plates with all that, and Cooper still being missing, and Creeper being on the loose. First, I must sidebar again to note how sad I am that Miguel Ferrer is dead; he is such a force for reason and stability in this show, one of only a few characters I’d trust to pick me up at the airport  — the others being Sheriffs Truman, Hawk, and Harry Dean Stanton, if he could drive. Possibly Miriam if she weren’t in a coma. Norma, if she had time in her busy schedule of looking at receipts and making concerned faces at the diner. That competent-seeming 911 dispatcher. Oh, Bobby! Bobby Briggs would pick you up on time. Jade the Sex Worker, in her too-short time with us, seemed like a woman who would do you that solid. Tammy The Overly Sexy FBI Wunderkind is probably also up to the task, but I only say that because that’s how her character has been written and not how she’s been acted. And that’s it.

Speaking of Tammy, you should read this interview with that actress on Vulture, which addresses the fact that her character is very…Sexy Librarian. It’s Chrysta Bell’s first acting gig, but she’s doing nearly every scene with her director; I am sure this is at least approximately what Lynch was going for. Why, I do not know. For me, the issues with this role are multifold. First, Bell’s two major scene partners other than Lynch himself are Miguel Ferrer and Laura Dern; almost anyone would come across as the weak link in that acting chain.  Many of the women in Twin Peaks are turning in a sort of stylized performance, but it’s very hard to do that in a way that also feels believably human and I’m not sure if Bell is up to it. I mean, Naomi Watts is killing it, but Naomi Watts is also Naomi Watts. Second, Tammy’s character has been written basically as Dana Scully: The Next Generation (top of all her classes, etc), and for a viewer of The X-Files generation (which is also the original Twin Peaks generation) there is a cognitive disconnect in seeing Tammy sort of slither around. I think she’s been styled in a way to play up the va va va voom aspect, and I don’t think she’s made this creative choice on her own; I honestly just don’t think whatever vision Lynch had for this character is gelling.

ANYWAY.  Albert tells Tammy that the Blue Rose Task Force is basically The X-Files and that everyone who has worked on it has disappeared except Albert.  Despite this fact, Tammy is eager to join said force. Maybe one of you should call Denise? SHE HAS A LOT OF EXPERIENCE.

That is basically all that happens with the FBI this week. Oh, sure, there’s bits and pieces of other things — we learn that Diane, inexplicably, texts in all caps; Albert is still intercepting her texts, and knows she and Creeper (maybe?????) are talking about Vegas; the coordinates on the arm match up to Twin Peaks; and Gordon takes approximately forty-five minutes to evict a chatty French woman of of the night from his hotel room — but nothing of huge dramatic import.

IS ANYTHING HAPPENING IN TWIN PEAKS, THOUGH? Yes. FINALLY. FINALLY we meet up with Sarah Palmer and she is IN A BAD WAY, yelping at scared little supermarket kids that “MEN ARE COMING” — repeating what that worked up lady with the horn told Bobby last week — and leaving without her many bottles of vodka before lying to a concerned Hawk that she’s doing fine, even though there might be someone rummaging around in her house/she could very well be possessed. NO, YOU’RE NOT FINE, SARAH. First of all, get rid of that terrifying ceiling fan. Second, consider moving to Jamaica.

While we’re catching up, how are the Hornes?

Well, to quote another prestige TV project, not great, Bob! First, Sheriff Truman has to go and tell Ben Horne that his grandson is a child murderer, and that he also tried to kill Miriam (who is in currently in intensive care and has no insurance. Miriam, if you come out of this, call me and I will walk you through the ACA website). Ben agrees to pay her bills, and hands over the key he got in the mail that corresponds to Agent Cooper’s old hotel room to Sheriff Truman, to give to Original Sheriff Truman as a keepsake. Sheriff Truman II is as warm and comforting and competent as ever, and also I’m pretty sure he’s going to hang onto that key in case it’s evidence. After he leaves, Ben makes a long and dramatic speech about how Grandson Richard Murderface has never been right and never had a father and his father once gave him a bike and blah blah blah, all while Ashley Judd stands around and makes this face: 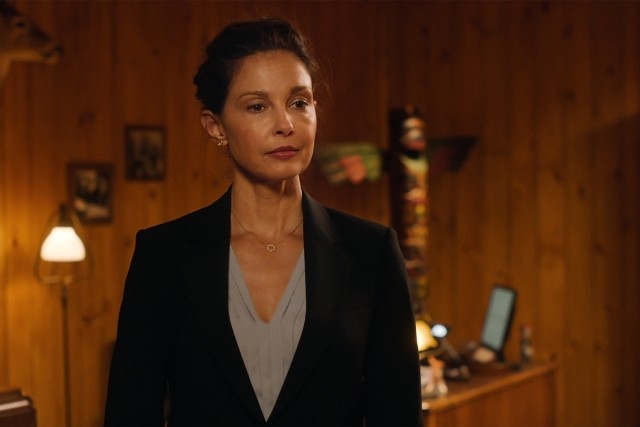 Ashley Judd is doing a good job of just making empathetic faces and occasionally listening to weird lamps. Also: ARE they going to bang? I feel like they were, then they weren’t, then they might again, and now I don’t know.

Also, Dr Jacoby is still making his cracked out YouTubes and honestly, I zoned out so completely while he was yapping on and ON and on and on that I almost missed the RETURN OF AUDREY HORNE. Her look has NOT changed, and neither has her bad attitude: She calls her husband Charlie a “a spineless, no-balls loser” because he won’t go out in the middle of the night with her to look for Billy, who is missing, and with whom she is in love/having an affair.

I have literally no idea, and I spent a lot of this scene wondering if maybe Billy is Balthazar Getty until I realized that, no, his name is Red. The good folks at Vanity Fair think Billy was mentioned in a previous episode, briefly, and I think they are right, and I also think it’s annoying that we got a literally ten-minute long scene with Audrey and this random dude she’s trying to divorce, arguing about a person we don’t know — including a lengthy phone call in which Audrey’s husband calls another character we don’t know and gets info about other people we don’t know, and then repeats it all. I don’t know these people, I don’t care about them, this is confusing, and while YES, I know it’s intentional, I also find it aggravating.

To quote the TV critic of the New York Times:

I believe that dragging… scenes… ouuuuuuut… is an intentional part of Twin Peaks’ aesthetic. It does not… always… wooooooooooooork

Did anything else happen in Twin Peaks?

Hey, did you remember Tim Roth and Jennifer Jason Leigh are on this show?

I didn’t, until they popped up out of nowhere and shot some random dude — WHO WE ALSO DON’T KNOW — in the head in front of his kid! So, never fear: They’re still total scuzzbuckets.

This Balmain Party Was Predictably Hideous

Krysten Ritter Really GOES FOR IT at the Defenders Premiere