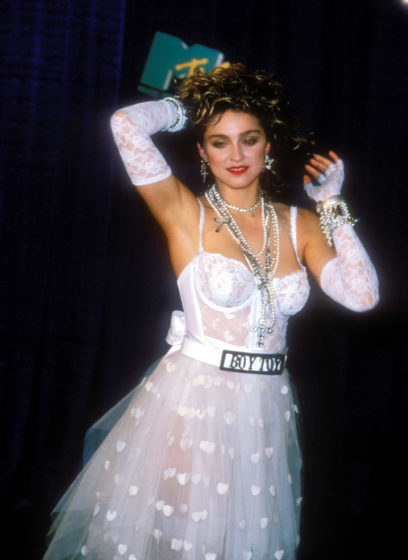 The VMAs debuted with a performance that instantly made them famous: Madonna singing “Like a Virgin” in the iconic wedding gown and thigh-highs, tousled hair extra-tossed. No one had ever seen anything quite like the writhing and the underpants, or so it’s told; here is the clip:

Madonna has said that the infamous parts of this were actually improvised or accidental: Her shoe fell off, she sort of tipped over trying to get it back on, and she ran with it. But I think the interplay between the wedding gown and the writhing is too pointed to have been purely improvised. To me it feels like she found a way to do exactly what she, already a wise provocateur but not yet a madly successful artist, knew would get the job done, and then innocently recast it as happenstance. Second, she asked to perform it to a Bengal tiger, and the answer was a firm no, which is how she ended up standing on a terribly made fake wedding cake. At the time that probably seemed enormous and extreme, but by today’s standards it’s an elementary school talent show set. Also, the venue is so dark that you can’t even tell there IS an audience until the end, and when the lights come up the applause feels… stunned. It’s quite a ride and I highly suggest you hop on it.

Look at All These Very Glamorous Photos of Diahann Carroll, Please!