The 1990 VMAs Also Had an Iconic Madonna Moment 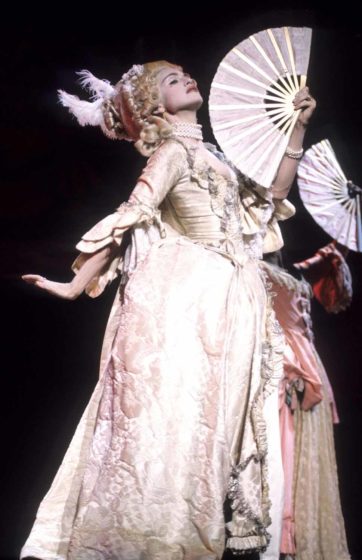 There are plenty of OTHER people in this slideshow, but of course I was going to open with period costumes. I’m human. So: Six years after “Like a Virgin,” we got Madonna-as-Marie Antoinette performing “Vogue,” which is truly just… SUCH a good song.

I love that it’s the polar opposite of the 1984 performance — though not without a saucy moment or two. It’s also striking how different the VMA vibe is by this point. The audience is at least audible, for one thing, and Madonna does know how to make it wait for an entrance. I do always wonder what it’s like to be up close during a lip-sync performance, though. I saw Britney in Vegas, and while she was absolutely not ever singing live, we were far enough back that we just sort of didn’t think about it. But right up in the front, it must be weird to see someone so clearly not actually making the sounds that you’re hearing.