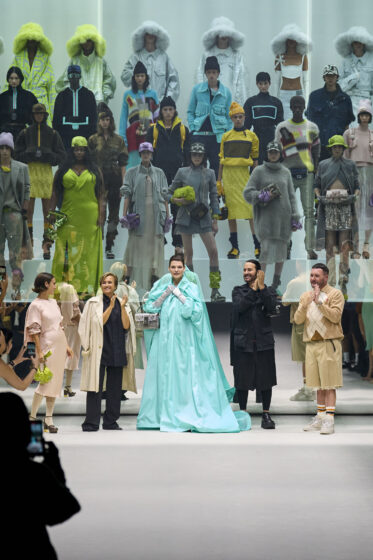 First of all, Vogue reported that Grace Jones was seated SECOND ROW for this event, to which I say: HOW DARE and I assume someone was fired. Additionally: Remember how last year, Versace and Fendi collaborated on a collection? This season, Fendi teamed up with Marc Jacobs for the looks at the end of the show, and everyone also celebrated the 25th birthday of the iconic Baguette bag. Drag one out of the closet if you hung onto it!

I thought this, from W, gave good context to what we’re seeing:

Marc Jacobs was given the reins to reinterpret Fendi’s most iconic pieces, in addition to the Baguette; he did so in a way that felt purely joyful. A slew of models wearing XL hats reminiscent of Jamiroquai and Pamela Anderson’s signatures walked out in oversized, directional pieces. There were funnel-neck sweaters with built-in Baguette front pockets and a neon green robe that twisted the Fendi logo on its head (not unlike Marc Jacobs’s ubiquitous totes). The partnership with Jacobs—one of America’s undisputed greatest designers of all time—felt like the perfect marriage of aesthetic language, even more so due to the fact that Jacobs brought [Fendi creative director Kim] Jones on as Louis Vuitton’s menswear creative director in 2011, back when he worked on the French house’s women’s ready-to-wear.

The power of networking! Join me for fluffy hats and Linda in a truly resplendent cape situation. The bags…are quite enjoyable.

Back in New York…Fashion Week Has Started And We Have Both Supermodels and Front Rows!

I Liked Bibhu Mohapatra This Season