Rotterdam has waited two years to host Eurovision, and when the moment arrived, it was laden with drama it wanted — an exciting and surprising finish, four countries that got zero points from viewers, and one country (the UK) that got no points from anyone — and presumably the kind it didn’t. Amid a spate of positive Covid tests that prevented both Iceland and 2019 winner Duncan Laurence from performing life, eagle-eyed viewers caught a moment on the telecast that led to accusations that the lead singer of eventual winner Måneskin had done coke in their booth. [Click here if you want to skip this discussion and go straight to the other acts.]

Damiano David vigorously denied it and swore to do a drug test when he got home, which was just confirmed as negative (this is hardly a surprise; no matter what he did or didn’t do, nobody wanted this drawn out). David claims his bandmate had broken a glass — Eurovision agrees that there was broken glass on the floor — and that he was picking up the pieces. Judge for yourself. Is it possible? Of course! Anything is possible. And he was cleared. But generally speaking, one does not handle glass in haste, nor with one’s face, nor while making what appears to be a rapid chopping motion with one’s other hand. So I can understand the suspicion.

If I’m being completely honest, my actual first reaction was: WHO CARES. I’m not trying to make light of cocaine. It’s bad, kids! Don’t do it! Do not liquefy your brain, or like Regina Morrow before you, your heart! But it’s freaking Eurovision, a historical hotbed of horny, substance-fueled hedonism. It feels more remarkable if anyone there was not doing cocaine. I assume the entire place is dredged in coke and deep-fried in beer batter. But it’s over now, and during their victory lap at next year’s competition, I hope the band sings Kesha’s “Blow,” followed by “Blowin’ In The Wind,” followed by something from the soundtrack to the movie Blow, followed by an original song called “Climb Every Mountain. Of Blow.”

I’m sure many of you will have a stronger take on the voting politics this year than I was able to glean in my hasty viewing. Rumors that people are punishing the UK for Brexit certainly seem plausible, though this is hardly the year to complain about it, as that song never stood a chance. Also-rans Poland and San Marino gave each other 12 points, the max, but at least both songs were believably worthy. Most interesting was that the top three songs were sung not in English, but in the singers’ native languages, which I think is key to Eurovision’s fun. But I also didn’t think the songs themselves were as delightful as some of the others that WERE sung in English but which brought a lot more personality to the proceedings — and personality is the OTHER key. It’s a conundrum. I’ve decided everyone just voted for the place(s) they most want to gorge themselves in 2022, that being anywhere in France (cheese on bread) or Italy (cheese on pasta) or Switzerland (liquid cheese). Since Italy was one of the early Covid hotspots, maybe they got the bonus boost of people wanting to give them extra recovery tourist dollars. But I am here to tell you that Iceland and Malta should demand justice, and honestly… how did Germany only get 3 points? It’s not a good song, it’s true, but JUST WAIT UNTIL YOU SEE THE PERFORMANCE.

As for our winner… 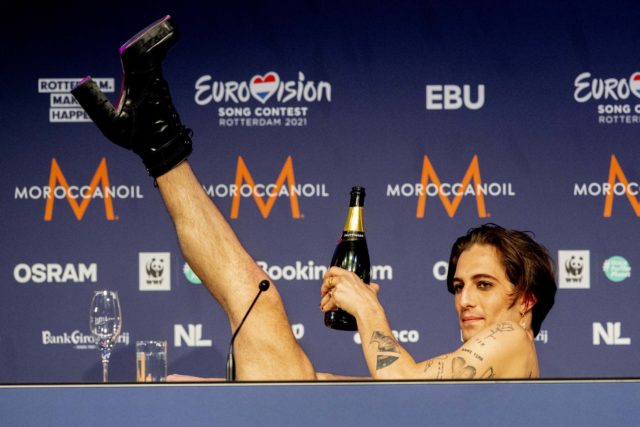 Wait, I’m getting ahead of myself, although clearly we have as a society missed the window for Hugh Grant to fulfill his destiny and play Damiano David in the movie of this controversy.

Anyway, meet Måneskin, or as I like to call them, the Maroon Lukewarm Chili Peppers: The dude on the right even LOOKS like one of the Chili Peppers, doesn’t he? There are also guitar riffs in the song that evoke Kiedis & Co. We didn’t need another RHCP (in fact, we didn’t technically need the first RHCP either), but here we have one, bringing the contest back to Italy for the first time since the 90s.

Måneskin is very committed to cross-stitch, and nipples, and torsos. The song was sung in Italian, and ironically — given the accusations Damiano has denied — one of the repeated lines is, “Talk, unfortunately people talk, they don’t know what they’re talking about.” The theme is embracing your uniqueness (“We are out of our minds, and different from them”) and the translation into English has left me confused about what this, perhaps, was trying to say: “Me I’ve written pages and pages / I’ve seen salt then tears / These men in the car / Don’t climb the rapids.” I should hope they don’t. It would be very difficult. Always kayak in boats, not in vehicles.

In case you were wondering, yes, they growl-rocked out for a while. They were not the only metalesque band; Finland was, too, and here I think Italy sincerely benefited from going third to last, because that meant their song stuck in people’s heads better than the other one. Also, the nipples. People were crushing hard on the sex, allegedly-not-drugs, and rock-and-roll of it all. It’s catnip to voters. Or maybe just to me. His pants were very tight. One of the original lines was allegedly, “You’d better touch your nuts,” which this website claims they sanitized into what was translated as, “You’d better not make any more mistakes.” That is also delicious irony: Mad respect for anyone who shoots Champagne at the entire room AND into their own mouth. It does not mean he did cocaine on the green room table. It DOES mean this person came ready to party. “Pardon me, but I shall cling to my civilized flute.”

To see the other acts, click into each block below and it’ll drop open. Do not skip Iceland, Ukraine, Malta, Lithuania, Russia, Greece, Norway, Germany… just don’t skip, period. Treat yourself.