Bless Fug Nation: Logo didn’t stream Eurovision this year, but our brilliant people on Twitter knew which countries were not geo-restricting their broadcasts, so I got to curl up on my bed and watch the entire shebang, including a lot of the voting. Which meant that as we got ready to go out that night, I propped it up in my bathroom while I was wrestling with my unruly hair and Kevin kept hearing things like, “WHAT?!?” and “Um, OKAY,” and, “THAT GUY WAS SO BORING,” and of course, “YES, GET IT, NORTH MACEDONIA!” If you would like to watch, this link should take you to one that works.

The big loser: Probably Madonna, if I’m being honest, although technically the UK came in last. Had anyone been allowed to vote for Madonna, though, she might not have gotten very many.

Obviously, I’m very happy for Duncan, and apparently he was the hot favorite to take it all. Some of that might be that he was, indeed, hot. If you want to watch, he performed twelfth and he starts at roughly the 1:03:04 mark, though you can watch his official produced version and video on YouTube. However, I would always advocate the live performances, because that’s what we’re voting on here, after all. Duncan has a really nice voice, at least, and he belted a very low-key ballad with total softball lines like, “Small town boy in a big arcade // I got addicted to a losing game.” I assume this is about Frogger, a cruel mistress indeed.

His performance was very spare and kind of boring: 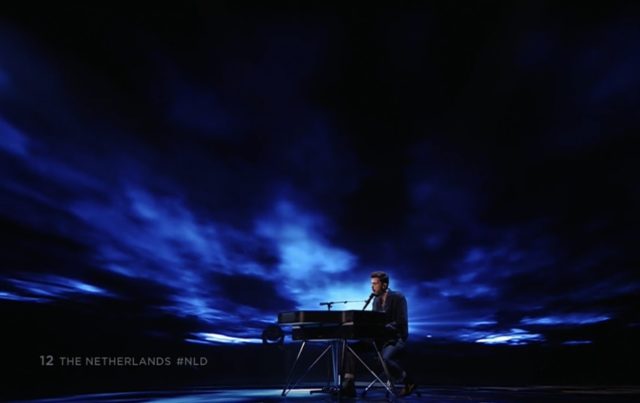 While I realize it is TECHNICALLY a song contest and not a pyrotechnics one, surely we can find a balance. Would it have been bizarre for him to sing the words “loving you is a losing game” while video images of Ms. Pac Man played on the wall behind him? Yes. But is this freaking Eurovision? YES. We like things weird and literal and on fire and creative. So would a fire cannon during his refrain have been a delicious point of emphasis? YES. Obviously, the public disagreed with me, since it was the public vote that put him over the top (he was third after the juries voted). But whatever. I have notes. I always have notes.

The rest of the contestants are below — just click on each box, and it will open up. I also linked to where, in the live feed, you can hop to for each performance; the times are approximate, because it’s hard to be too exact on this one, but if you get a little bit of the person’s introductory video first then that’s fine because they are weird and charming, and feature beautiful scenery from around Israel.

As always, I recommend streaming the whole damn thing — you can skip ahead if you don’t like a song, and you can take your time with it — but if you’re going to be selective: At least try and watch, in no particular order, Norway, Australia, Sweden, San Marino, North Macedonia, Russia, Denmark, maybe Spain, those goofballs from the Czech Republic, Israel, maybe Estonia, probably Iceland even though part of me doesn’t want to encourage them because they might be douches… I could go on. AND I SHALL, down below: