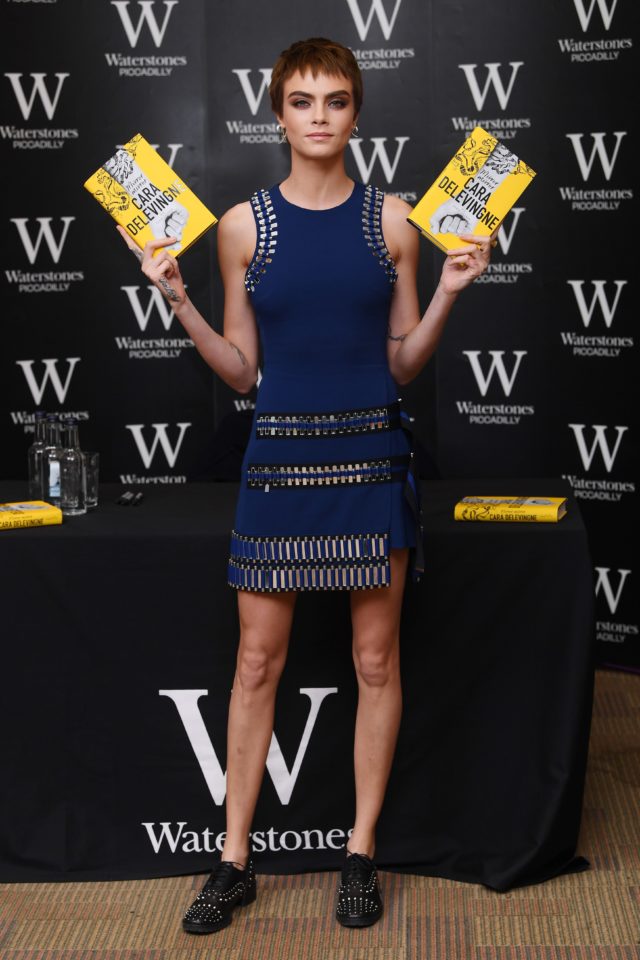 Cara apparently has a YA novel coming out next week called Mirror, Mirror — and if you’re wondering, yes, there is a co-author credited as well. I’m not trying to say I don’t think Cara could bang out a novel; just that my first reaction was, “When did she have TIME?” Fug Nationals who did NOT leave their Kindles in the seatback of an American Airlines plane, never to hear from them about it again, please do report back if you read it.

I rather like the kicky minidress here, AND the shoes, although I am wondering if the metallic accents on them both are in conflict with one another. But unfortunately, in a reaction that is deeply subjective and due to the world being such a vicious disaster right now, my first reaction to the detailing on the skirt was that it looks like a string of ammo. I think I am just jittery. I think she is wrangling this phase well, but I also look at this and have the reaction I often have when watching the “after” shots of an ANTM makeover: that this very cute person looks vaguely familiar — in ANTM’s case, because I would have met her an episode or two ago — and is wearing a hairstyle she wouldn’t normally choose for herself. If Cara does decide to keep this, I hope she veers punk with it again; if she doesn’t, I am looking forward to the choppy-bob phase.

Claire Foy and Andrew Garfield Have a Grand Old Time

And Now, We Start the Slow March to Star Wars’s Final Chapter