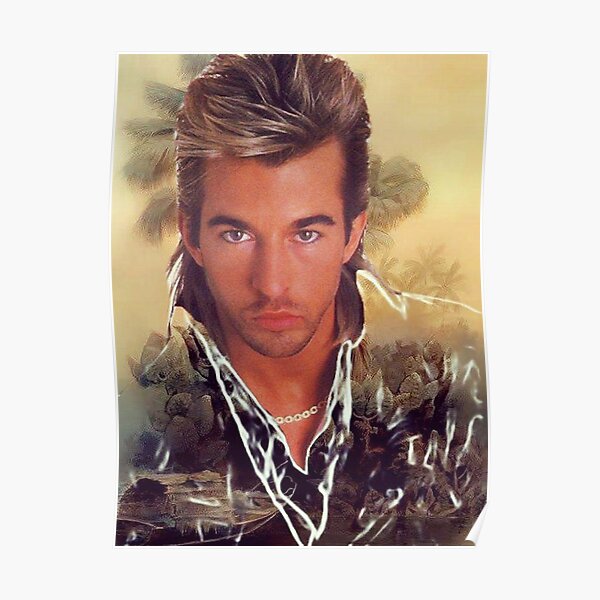 I realize this may seem like an incongruous choice after the splendor of Celine Dion and Meat Loaf, but it’s sparked by the post I did yesterday of YM covers. I was remembering the magazines of my youth that came with posters you could tear out and unfold and smack onto the wall, and I basically never said no to any of them, which meant that for a period of time — after “The NeverEnding Story” came out — I absolutely did have a sultry poster of Limahl on my wall. It was not the above poster, sadly. Nor, regrettably, was it this one: That one is from his Kajagoogoo days — oh yes, Limahl also brought you “Too Shy,” before he was dumped by the band via telephone. Ice cold, Kajagoogoo. Ice cold. I also learned that Limahl is an anagram of his actual last name. I love that. Maybe we WERE soulmates.

I’m extremely sad it wasn’t this poster on my wall either: Those are some sensitive overalls right there.

It also was not Limahl Seduces a Door (which, by the way, I’d like to see as a sketch in the vein of Kristen Wiig’s Liza Minnelli Tries To Turn Off a Lamp): It was probably the CLOSEST to this one: The point being, that hair was on my wall, and I think Dan Stevens — Cousin Matthew from Downton — could play Limahl in a Netflix movie that doubtless needs to be made about the logistics of this hair. (He is brilliant in the Eurovision movie, which I keep meaning to recap here but I haven’t had the time to watch it again on a machine where I can also make screen grabs. SOMEDAY.)

Anyway, “The NeverEnding Story” stuck with me way more as a song than as a movie. I’ve definitely SEEN the movie? I remember a flying dog. Wikipedia tells me he’s a luckdragon. And I remember thinking Bastian and Atreyu looked too similar, though maybe that was the point? Reader proxy? I just went and read the Wikipedia page and some of it came back to me — the horse part, the ending — but the success of this song was my heart’s biggest takeaway, and it of course got a bump in popularity after it was sung in Stranger Things’s third season. It’s totally catchy and FULL of the kind of synthesizers that mark all good Giorgio Moroder songs (I mean, can we talk “Together in Electric Dreams”? The best), and they came up with some conceit where the song fades in AND fades out so that it feels neverending. The logic there is a little shaky, but I appreciate the thesis, Giorgio. B-.

But the video is… terrible?

The woman in it is Mandy Newton, one of his backup singers, and NOT the actual vocalist Beth Anderson (possibly because he used a different duet partner in France, so this made the video universal, somehow?). For some reason they’re hanging out underground with a bunch of steaming pipes, and Limahl clearly skipped the class on how to move in a music video, because there’s a lot of bopping and then some Cheek! Explosion! Hands! Watch:

“Okay, Limahl, so straddle the pipe… yep, that’s right, and then you and Mandy can just… rock, a little? This is perfect. It’s EXACTLY the vibe we need for a movie about a flying dog.”

Your Morning Earworm: “It’s All Coming Back To Me Now”