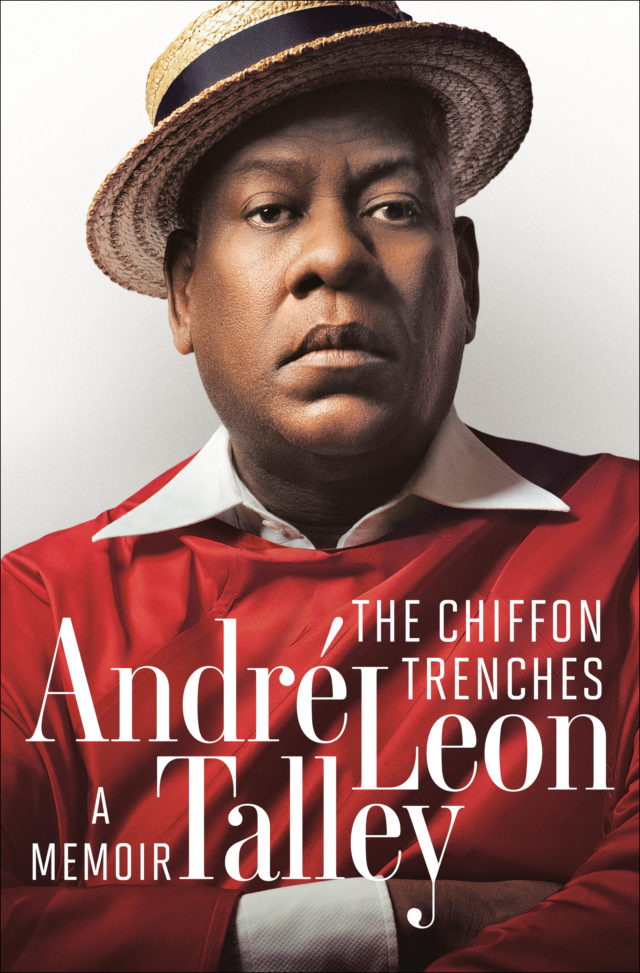 Well! Our usual schedule of giveaways has been (like everything else) interrupted by the pandemic, as most book professionals are not in their office to mail winners their books. Like everyone else, we’re trying to adapt to our new normal, and today we are Trying Something, in form of a digital promotion. (Don’t worry, you don’t need to have an e-reader to win this; you can read the digital version of this book on your phone or computer, too. All you need to do is make sure you have a NetGalley account; you can sign up for one here if you don’t have one already.) And WHAT A WAY TO START! We have 3 copies of Andre Leon Talley’s very juicy new tell-all book, The Chiffon Trenches to give away today,  to put in your hot little hands before it comes out in two weeks!

We’ve talked about this book a lot here — apparently, he lays into Anna (I’ve only just started reading it myself) — but here’s the cover blurb in case you’ve missed it:

During André Leon Talley’s first magazine job, alongside Andy Warhol at Interview, a fateful meeting with Karl Lagerfeld began a decades-long friendship with the enigmatic, often caustic designer. Propelled into the upper echelons by his knowledge and adoration of fashion, André moved to Paris as bureau chief of John Fairchild’s Women’s Wear Daily, befriending fashion’s most important designers (Halston, Yves Saint Laurent, Oscar de la Renta). But as André made friends, he also made enemies. A racially tinged encounter with a member of the house of Yves Saint Laurent sent him back to New York and into the offices of Vogue under Grace Mirabella.

There, he eventually became creative director, developing an unlikely but intimate friendship with Anna Wintour. As she rose to the top of Vogue’s masthead, André also ascended, and soon became the most influential man in fashion.

The Chiffon Trenches offers a candid look at the who’s who of the last fifty years of fashion. At once ruthless and empathetic, this engaging memoir tells with raw honesty the story of how André not only survived the brutal style landscape but thrived—despite racism, illicit rumors, and all the other challenges of this notoriously cutthroat industry—to become one of the most renowned voices and faces in fashion.

Woven throughout the book are also André’s own personal struggles that have impacted him over the decades, along with intimate stories of those he has turned to for inspiration (Diana Vreeland, Diane von Fürstenberg, Lee Radziwill, to name a few), and of course his Southern roots and ongoing faith, which have guided him since childhood.

The result is a highly compelling read that captures the essence of a world few of us will ever have real access to, but one that we all want to know oh so much more about.

This seems relevant to our interests!

THE TASK:  As usual, I’ll be picking the winners at random. To enter, please comment and share your favorite other tell-all piece of pop culture (book, biopic, whatever. Are there tell-all songs? “You Oughta Know” probably counts).

THE RULES: All entries must be posted in the comments of this post by 9 p.m. Pacific time on Friday. FYI, if this is the first time you’ve commented here, the system will automatically kick you into comment moderation, but don’t worry, I will rescue you.  (Open to US readers only; all prizing courtesy of the publisher. We use affiliate links when available.)

Highlights from the Met Gala 2006: AngloMania: Tradition and Transgression in British Fashion