Sometimes I wonder if Eurovision has started to tone itself down because it’s become more of a cult phenomenon across the globe, resulting in fewer performances that lean into regional quirks, traditions, and celebrations, and more that attempt plain old pop songs. The beauty of Eurovision has always been the pageantry mixed with earnestness, and when people aim for commercial success, the songs get worse. Every year I fret, and then every year, I stand back and look at the array — this year: Vikings, beards, special effects, weird contact lenses, chicken noises, stuffed chickens, catsuits, and a truly unusual winner — and I think, “We’re still going to be okay.” It might not be everything it was back when Lordi won, and sometimes you get full-on Nashville country from a dude repping The Netherlands, but BY GOD, there will always be Moldova. I officially want to go to there.

The Grand Final was on Saturday, and to my endless regret, I haven’t seen the semis. Eurovision allows Logo to stream the final, and MAYBE the semis, but you can’t watch clips on the organization’s own site if you are in North America (and probably other places) because… I don’t know why, actually. It makes no sense to me. Open up your audience and rake in the dough, y’all. Just because we can’t enter — and we shouldn’t; some things, like The Great British Baking Show/Bake-Off, do not need to be stamped with the United States’ hand — doesn’t mean we don’t want to watch it and then give your advertisers all our money.

Here are this year’s finalists, in the order they finished, beginning with one of the most delightfully goofy winners in recent memory. And for prior years’ Eurovision coverage, drop by our Eurovision archive.

This song is quirky as hell, and had I not already been spoiled on the outcome, I NEVER would have expected it to win. Indeed, it was only in third or fourth place after the jury vote, so I it came down to viewers. On the surface, it’s all Netta making clucking noises and posing in front of dolls, in a way that appears to be appropriating bits of other cultures without me being ENTIRELY sure why: She also uses that machine in front of her to record herself making noises and then loop them back, so that she can build a full background sound that is all her. This reminds me of something Feist did while opening for Rilo Kiley, and our skepticism when she promised us it would be fun drew the irritation of a nearby Kirsten Dunst — who has since revealed herself to be an awesome person and good sport, and who may actually only coincidentally have been glaring in our direction; all is well. MEMORIES. Anyway, the three squares in front of her also briefly spelled out HEY when she tapped them in order, which was friendly. Hey to you, too, Netta. Having fun? Hell yeah you are. Now, please note, I wrote off this song as ENTIRELY barnyard noises for a good chunk of it, much like I wrongly wrote off Feist that fateful night. Then she sang, “I’m not your toy, you stupid boy,” and I thought, “Hang on, that’s TRUE, dammit,” and rewound it. Apparently Netta considers this a female empowerment anthem for the #MeToo era, and she further won me over with lyrics like, “I’m taking my Pikachu home. You’re stupid just like your smartphone,” and, “Wonder Woman, don’t you ever forget, you’re divine and he’s about to regret,” and vitally, “I’ll make you watch me dancing with my dolls on the motha-bucka beat,” that motha-bucka being essentially, yes, another chicken noise. She. Has. Created. An. Experience. She also brought some super intense friends. I like her kimono-style dress, but that looks like she glued an old corset on the front of it. Still, she was lively, and a song about boys being dumb feels like a nice choice for 2018. 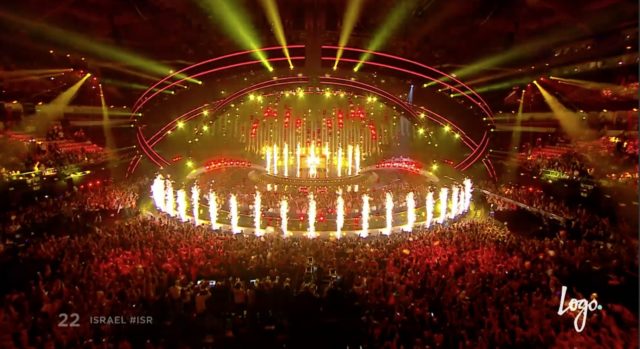 Also: FIRE. SEE, EUROPE AND ITS NON-EUROPEAN FRIENDS WHO COMPETE AS WELL? Fire is for WINNERS.

For the others, click on each block and it will drop down to reveal photos and details; you can click on the X to close it when you’re done and move along to the next block. MAGIC.