Behold the Craftsmanship of Guo Pei 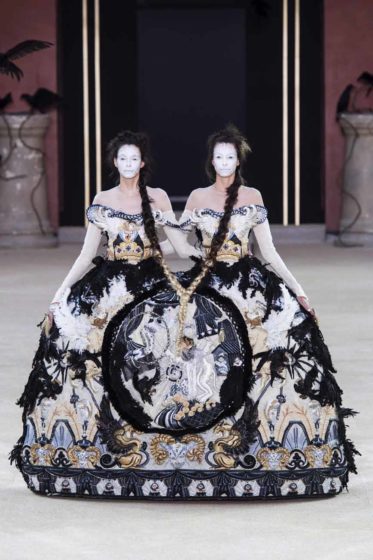 Guo Pei’s work all feels like elaborate museum pieces — and indeed, the traveling exhibit of her stuff is breathtaking — which may be why the only time I can really recall seeing it on a red carpet is when Rihanna owned the Met Gala. There are a couple things in here you could put on a celeb, like slides 8, 10, 12, 17, 18, 25, and MAYBE 2? But let’s be clear: I will CHEER if the last two make an appearance.

From Vogue, about the inspirations:

Guo Pei described this collection as “an alternate universe,” which may or may not have represented the afterlife. A sandy runway was decorated with an arch of entwined black branches populated by black crows suggesting a macabre portal into her imagination. “When I was a child, I often thought about death,” the couturier said through a translator. “Where do we go? I think a lot of people think about this.” From the opening dress, with its two-for-one Marie Antoinette pannier skirt inhabited by ghostly twins, to the penultimate gown that turned the model into a glamorous mummy, these were otherworldly, largely colorless creations destined for the most high-ranking souls (whose diversity, it should be noted, was questionably lacking).