I know some of you are going to hate this, but I think this cover is really, really good: 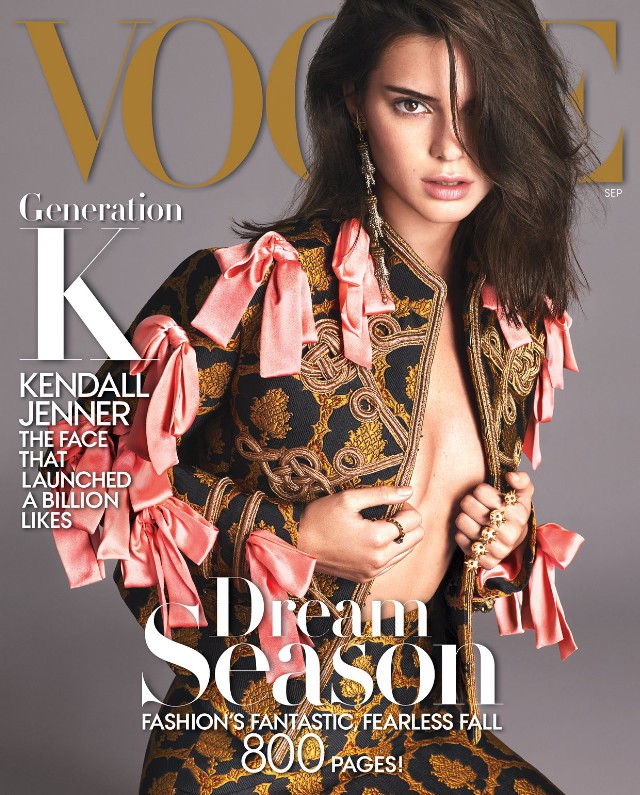 To me, it looks like a classic Vogue cover — almost reminiscent of the late 80s/early 90s, especially given what Kendall is wearing — and she looks like what she is (whether you like it or not): a proper professional model. In fact, given how few words are on this cover (hell, there are barely any letters in “Vogue;” she could be appearing on the cover of a designer imposter magazine called Voe), my first reaction was, “is Vogue doing subscriber covers now?” That’s a compliment: Subscriber covers are generally more artistic, more striking, less commercial than the newsstand ones. The choice to render her as classically modelesque as possible was surely highly intentional — Kendall herself is trying to get away from being seen as just a reality show star, and has been for year — and I think she does that decision justice. Anna has a fine line to walk, I think. Vogue, like every print (and, frankly, online) magazine, has to compete for readers’ eyeballs now more than ever, and the Jennerdashians bring eyeballs. Putting Kendall on this cover is probably a smart business decision. Luckily, I think Kendall is also a totally competent models, which means this cover also looks like Vogue as it ought to look, rather than Vogue In Desperation Mode.

The interview with Kendall is revealing, as well:

“Marc [Jacobs] invited my whole family to that first show, and I was like, ‘I love you guys, but can you please just not come?’ I was trying so hard to be taken seriously, like, ‘Guys: This is not a joke or a stunt; this is what I want to do with my life.’ I had to prove that I could do it.” She sighs deeply, the sense of relief that it all worked out as palpable as if it just happened yesterday. “And now I feel like I’m a part of something. I feel I have accomplished something that is mine.”