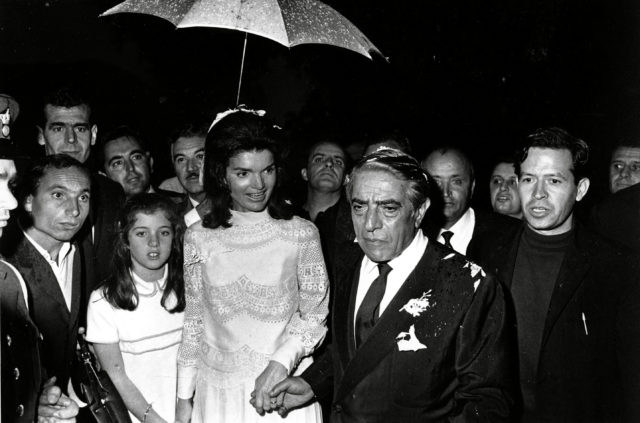 Given that this isn’t a royal wedding — although of course we could argue that Jackie is American royalty, and it would be true — I almost titled this “Rich Wedding Rewind” instead, and honestly, that’s accurate. Yes, friends, the time has come again to eyeball the Weddings of Rich People With Personal Problems, one of my very fave genres. If you missed Jackie’s first entry into the category, you can revisit her (beautiful) wedding to JFK here; the groom also actually made a cameo into our look back at Grace Kelly’s wedding to Prince Rainier, as he (a) gave them a yacht as a wedding gift and (b) is the person who came up with the idea of Rainier marrying a movie star in the first place. As noted in that linked piece, Ari and Rainier had a VERY complicated friendship and if they were women, someone would have written a great beach read about them by now.

I presume you know all of Jackie’s highlights, and probably have the gist of Onassis — VERY rich, big fan of yachts, had a complicated relationship with Maria Callas — but let me just tell you that his Wiki is a good ride, and I say this as a connoisseur of Wiki Deep Dive Wild Rides. It’s got: sincerely abject tragedy; some light whaling; creepily young first wives; a cameo from the Supreme Court of Monaco; a private island; Christina Onassis being kind of a jerk about Jackie (which I knew from a lifetime of reading the front pages of tabloids at the market; her brother wasn’t a fan either, but he was tragically killed in a plane crash that Ari thought might have been done by the CIA [it was just a terrible accident] before I was born and thus never showed up on the National Enquirer); and also a lot about ill-fated boats. (I mean, he was a shipping magnate.) But as usual, it is the woman’s Wiki that gets truly down into what we want to know,  PERSONAL SHIT:

On October 20, 1968, Jacqueline Kennedy married her long-time friend Aristotle Onassis, a wealthy Greek shipping magnate who was able to provide the privacy and security she sought for herself and her children. The wedding took place on Skorpios, Onassis’s private Greek island in the Ionian Sea. After marrying Onassis, she took the legal name Jacqueline Onassis and consequently lost her right to Secret Service protection, which is an entitlement of a widow of a U.S. president. The marriage brought her considerable adverse publicity. The fact that Aristotle was divorced and his former wife Athina Livanos was still living led to speculation that Jacqueline might be excommunicated by the Roman Catholic church, though that concern was explicitly dismissed by Boston’s archbishop, Cardinal Richard Cushing, as “nonsense.”  She was condemned by some as a “public sinner,”  and became the target of paparazzi who followed her everywhere and nicknamed her “Jackie O.”

Public sinner! Lay off, y’all — if the archbishop is cool with it, I don’t think she’s gonna get in that much trouble with the big guy. This sort of reaction, of course, not that unusual; people were similarly worked up about Ingrid Bergman, as we covered here in a post about Capri that Onassis also makes another cameo in, and (obviously) Elizabeth Taylor. That aside, I’m not sure if my first few minutes of reading about a wedding have ever led me to having as many tabs open as I do right now. They are:

1. Skorpios, that private island: The census reports only five people live here currently. Jackie was once photographed doing nude yoga by the paparazzi there! Honestly, good for her.

2. Athina Livanos, Ari’s previous wife: Um, she went on to marry her dead sister’s widower….Stavros Niarchos (the original, obviously, not his offspring who dated Paris Hilton). This woman LOVED a Greek billionaire. (In between him and Ari, she married the John Spencer-Churchill, who was the Duke of Marlborough; if she weren’t dead, I’d say she needs to give a Learning Annex class on marrying well because all her husbands were whatever the level of richness is beyond loaded.) If you really need to go on a tangent instead of doing work today, the Personal Life section of Stavros’s Wiki is also a MESS, including a whole marriage that everyone pretended didn’t happen because it took place in Mexico and very off-handed mention of an affair he had with Pamela Harriman, whose Wikipedia Personal Life section is ALSO very dramatic.  All these rich people got up to some stuff between 1945 and 1997 and frankly, I am here for reading all about it. Where is my ten-part miniseries about all of them making incredibly terrible yet also quite dramatically thrilling personal choices on yachts?

3. Christina O, the yacht: Includes the phrase “[t]he bar stools in Ari’s Bar retain the original upholstery crafted from a very soft, fine leather made from the foreskins of whales.” Only the richest people have whale foreskin upholstery!

4. Christina O, the person: This whole thing reads like a Judith Krantz novel with a very sad ending. (In fact, 65% of everyone involved in this story were unfortunately doing too many benzos, which I think was definitely par for the course for this social circle at the time.)

And now to the wedding itself. Brides had some juicy intel — the ring was a modest 40 carats! The gown was Valentino! — but this piece in Time felt more wide-ranging, and taught me that this wedding was basically a surprise to everyone, and that Onassis had also dated Jackie’s sister Lee. (Listen, I know the social circle of the very very very rich is a tiny one, especially back in the day, but y’all gotta widen your romantic horizons!) If you’re looking for an honestly somewhat WILD contemporaneous piece, Life has you covered — with some really excellent and interesting photos. It is GOSSIPY (and was the cover story)! (Scroll to page 18 there, although I will note that the letters in the first section of the very long letters to the editor feature feel extraordinarily familiar, if you stop there on the way; there’s also a fairly amazing piece about the Apollo 7 wives further on.) Finally, I recommend this piece from the New York Times in 2018: “When Jackie Married Ari: How We Reported the Wedding of the Decade: 50 years ago, the queen of Camelot wed a Greek tycoon. The Times had an inside source at a ceremony that was off limits to the press. But that wasn’t our only scoop.” It’s got TONS of logistics, and also links to this piece about Jackie’s hairdresser; it’s truly a blessing that all these old articles have been scanned and are online. When I have more time, children, let me tell you about how we used to have to go look up old Rich People Weddings on microfiche machines.

Shall we look at some pictures? I regret to inform you that Jackie did not carry a bouquet, so I cannot weigh in on its size.