Vogue had planned this cover as a triumphant Olympics edition: The photos and the interview were done as far back as February, back when people still expected the 2020 Games to happen. I am delighted they didn’t change course when they got cancelled. After all, Simone Biles is no less a champion without Tokyo 2020, and no less incredible without a competition. You could give her this cover every month of the year, and make each story about a different move named after her, or a record she smashed.

There are two covers: The above is the newsstand version (and I suppose also subscribers; I don’t know if anyone is printing two these days). It celebrates her power. Below is the digital cover: 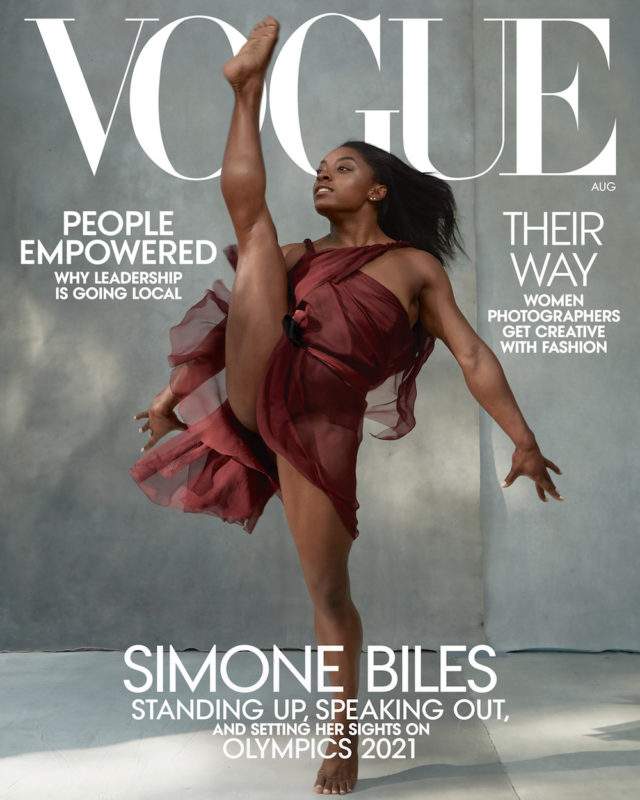 I like this one better, I think. Mostly because it has movement and strength and balance and grace — Simone Biles is known for how high she can jump and the feats of strength she can perform, but she is more than that, and this feels like a photo that displays the whole package. She is a marvel, and the story itself is too, winding from her birth through her foster years to being adopted by her grandparents, to discovering gymnastics, to a harrowing account of how she reckoned with her own abuse at the hands of Larry Nassar. Absolutely read it all.

Confession: I can barely watch the beam. I can’t deal. My hands start to shake and my palms get clammy. Even when an expert is at the helm. But this routine is great and it ends with what I BELIEVE is the most recent move to be named after her, and she slays it.

As for the covers, the only question I have left is: Shouldn’t women in photography ALREADY have been given the freedom to get creative with fashion, Anna? This should not be a newsworthy occurrence or content idea.

SJP Is Recognizable Even With Most of her Face Covered