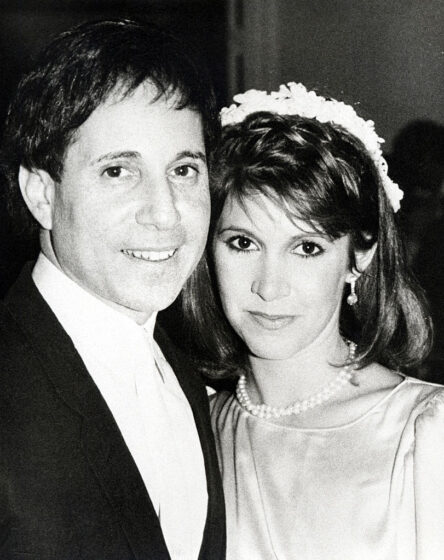 Last week, we covered Mia Farrow’s wedding to Frank Sinatra, which led to a 25 month-long marriage; today, we’re taking a look at the wedding of a tumultuous and talented pair who were technically only married for eleven months. Has this website’s wedding coverage moved into the category of Brief Celebrity Marriages Between Two People Who Otherwise Pretty Much Got Along? I don’t mind it. And, spoiler: This slideshow is primarily wedding guests, and the photos are tremendously 1983. (We also get a fun mini-version of Did They Date?!?!)

FYI: Although these pics are great, I could not get a full-length pic of Carrie’s dress without paying an insane amount, but I can link you to some home photos of them on her brother Todd’s website, which is where I learned that it’s a champagne color. There is also a good full-length shot of the gown at this VERY juicy and well done piece about their relationship over at InStyle. (Thank you to InStyle for writing a ton of throwback wedding coverage during the height of the pandemic, much as we did, and for beating me to this one!) It seems like Paul and Carrie were extremely on and off and on and off and on and off and on and off for literally decades. Per Vanity Fair:

In Wishful Drinking, she frankly discussed her relationship with Simon. They married in 1983, then divorced the following year. “Then we dated again,” Fisher wrote. “We were together for more than 12 years (off and on) and we traveled a lot. The last place we went to was the Amazon, which I recommend if you like mosquitoes.”

The VF piece, which was written when Fisher died, goes on to explain that they took a hallucinogenic tea that gave Carrie a vision that basically turned her off Paul forever. As one does! (She also said that she didn’t “supply someone with a really peaceful home,” which seems probably true.)

As ever, I also recommend reading the contemporaneous coverage of these nuptials in People, both because it’s interesting and because People used to be VERY sassy; this particular piece is quite amusing and full of affectionate puns. (It also taught me that the wedding was hosted in Paul’s apartment in The Brentmore, which is a VERY FANCY Central Park West co-op; check out the apartment that was for sale there a few years ago.)