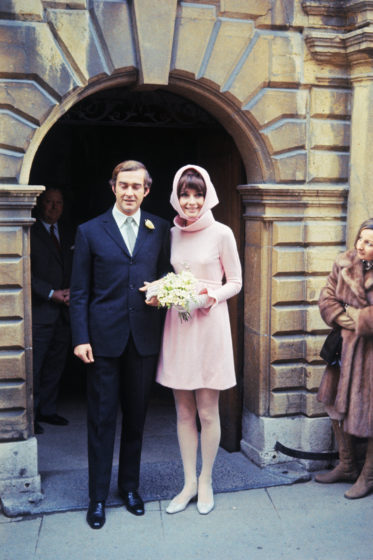 It felt like you might want to drink in what is, in fact, an absolutely perfect second wedding gown. It’s not a surprise that Audrey Hepburn managed to look exquisite and perfectly gamine in this situation. (Her look is, of course, Givenchy.) She and Andrea Dotti, a psychiatrist, got married in 1969 at a town hall in Switzerland.

Dotti met Hepburn in June 1968 on a cruise aboard a yacht owned by an Italian socialite, and fell in love with her on a trip visiting Greek ruins. He married her on 18 January 1969. Hepburn stated at the time that she and Dotti expected to have children together and that she would end her acting career to become an “Italian housewife.” Dotti had one child with Hepburn, a son named Luca, born on 8 February 1970.

Dotti and Hepburn were married for 13 years. However, many of those marital years were marked by Dotti’s frequent affairs with younger women. Hepburn stayed with Dotti until she decided that their son was mature enough to cope with the divorce. Despite their acrimonious divorce, Hepburn stayed in contact with Dotti during her lifetime for the benefit of their child.

Dotti died in Rome on 30 September 2007 after complications from a colonoscopy.

I don’t think he was a particularly great husband — Audrey had bad luck with men, in general — but the two of them looked damn glam together in 1969. Let’s admire them!

“Check Out This Guy’s Life Preserver!”