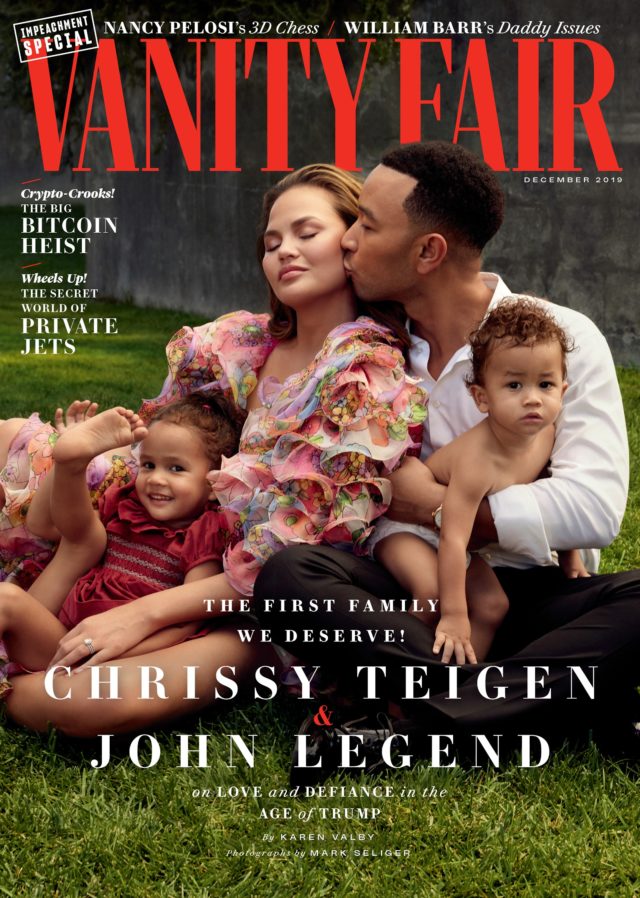 I think this is a lovely cover: lush and romantic, and very affectionate. It’s just over-the-top enough to feel glam, but it doesn’t feel contrived. (The kids are superstars here, too. Look at little Luna’s sassy foot!) Does it look like it’s December where they are? No, and I might have loved a very aggressively HAPPY HOLIDAYS vibe — like, Chrissy Teigen could for sure pull off mugging next to a fab Christmas tree — but this is a very good cover. I cannot imagine they’re not delighted by this.

The interview is also juicy. It’s forthcoming — which is on brand! — and very funny.  I could have pulled a ton of quotes from it — it’s in that sweet spot of being penned by a good reporter, about people who are willing to give a proper interview — but this one is right at the top and gives you a good taste:

When she gives this reporter a tour of the house, [Chrissy] doesn’t just point out the fitness room (“Here’s the gym I never go into”), the master bathroom (“Here’s my tub where I take baths with Luna and we watch the movie Coco”), and the screening room (“Look at all my candy jars. Literally all I wanted as a child was a room with this much candy”), but also the milky tablet in the ceramic bowl next to the Nintendo Switch on her nightstand: “Here’s my Lexapro.” Teigen has become a social media icon precisely because she can be frank about her struggle with anxiety and her need for approval, while also dunking on the president and MAGA nation. As she puts it, “I don’t care about pissing off a bunch of bigots.”

BLESS. And, not for nothing, but John Legend comes off in this interview like the mensch I think he is. To wit:

“Honestly, I don’t comprehend why guys hate women so much sometimes,” says Legend. “You see someone as transparently competent and eloquent and on fire as Elizabeth Warren and then you hear some guys just are not into voting for a woman. Why do guys feel so threatened by the idea of a woman president?”

DOUBLE BLESS. The whole story is just…really, really nice. It’s very rare to come out of a celeb interview and think, “ugh, they’re really lovely,” but I did that here.

I’ve been debating cancelling my Vanity Fair subscription — in part, honestly, because I only get 80% of the issues I’m meant to get — in favor of Town & Country (I can only buy so many magazines about rich people, fancy murders, jewelry auctions, and bad shit that happens on yachts, and I’m also getting Tatler), but I feel that race just got tighter again.

Let Us Not Reinvent The Clothing Wheel

Jen and Reese Are Spending a LOT of Time Together