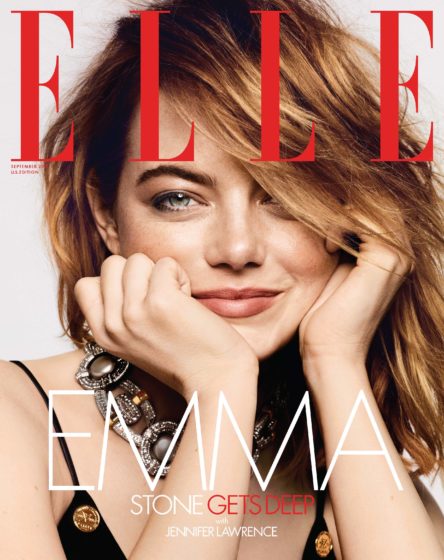 Listen, this cover is fine. Good, even. But you know how I complain about celebrities interviewing other celebrities all the time? Well, STRAP IN, because this is the one of the most egregious examples of that I’ve ever seen. And I think Elle knows it, because they open this piece with the words: “Friendship, to Emma Stone, is pretty much everything. Which is why the star and executive producer of Netflix’s Maniac—and face of Louis Vuitton’s new fragrance—requested that she be interviewed by her longtime pal Jennifer Lawrence (who calls her by her real name, Emily).” Allow me to translate that. It means, “Emma Stone was reticent to do an interview and we had to agree to let Jennifer Lawrence talk to her instead of a journalist or she wouldn’t do it.” And look, why wouldn’t she float that idea, given that every magazine on the face of this steaming hot planet is letting celebrities interview other celebrities? Obviously, editors are going for it, so why not take yourself out of what feels like a firing range, from a celebrity’s perspective?  The reason is: Because having your friend interview you makes for a flabby and anemic profile at best, and that doesn’t do anyone any good. Let me clarify something: Elle is never going to run a hit piece on their cover actress. You are safe to have someone on staff talk to you, actresses of the world.

You should really go read the entire thing, as it’s a doozy, but here’s the opener.

JL: You’re so pretty. How’d you get like that?

Here’s another bit that honestly should have been excised, but I’m sure whoever was tasked with, like, producing and transcribing this thing at Elle was like, “eh, fuck it. Let’s just lean into whatever the hell happened here.”

JL: What movie changed your life? Care to take a gander? Obviously the best movie ever made was Jurassic Park. We all know that.

JL: You were amazing with the triceratops.

JL: You look so good in khaki shorts. [Both laugh]

I feel like the undercurrent there, as actually it is in much of this piece, is Emma Stone trying to get things back on track. And the truth of the matter is, some of the interview is decent, because Emma Stone gives some honest answers to questions that Jennifer Lawrence then kind of (I am sure unwittingly) steamrolls to talk about herself some more. To wit:

JL: Have you ever gone through a spell in your life where you’ve felt that you’d lost grip on yourself?

ES: Oh my God, I went through that last night. [JL laughs] When I was a teenager, I was in a real sweet spot. Then in my mid-twenties, I really lost the plot. A lot of things shifted, and it felt like whatever that protective layer was, that mask that you build for yourself—this is my personality, this is who I am—totally shattered. What shattered? Security? The structure of my life shifted so much that I didn’t know how to relate to this new version, you know? My parents got divorced, and I went through this stuff with my career really starting. It all happened at once.

JL: It’s so much more helpful to talk about your life in a realistic way instead of having these false realities. Like, if I look skinny in a dress, that’s probably because I was watching what I ate. I didn’t eat a whole pizza and fit into a size 2! [ES laughs] I find it irritating when people make their lives look perfect. I remember when you were first talking about anxiety and reading that and being like, “Me too.” And then I didn’t feel like such an asshole for bringing it up. You look at the world realistically. You do.

The thing is, this is a normal friend-thing to do; Stone starts talking about something sort of hard and emotional, and Lawrence turns it back to herself, makes a joke to lighten the mood, and comforts and empathizes with her friend. It’s a nice way to have a real conversation with an actual friend. It’s not how you do an interview. An actual journalist asks a leading, and brief, follow-up question there about that period in Stone’s life — like, how did you get back on track? What happened when you were in that shattered place?

I actually don’t even really blame Jennifer Lawrence for any of this. They asked her to do it, and she probably thought it would be fun. And if it had been a video, it probably would have been fun. But Jennifer Lawrence does not translate well as an interviewer in print. This is just a fact. Jennifer Lawrence is a very good actor. She is not a journalist. Interviewing people is not easy. Actual journalists aren’t always very good at it. And Jennifer Lawrence is NOT good at it, and she is also not an actual journalist and that is OKAY. NOT EVERYONE IS GOOD AT EVERYTHING. I would not have been any good in American Hustle! But this also is not particularly good for Elle and honestly, it’s not all that great for J. Law, who already gets a lot of pushback for being obnoxious. This is not not obnoxious!

At this point, this whole thing just makes me sad. This isn’t good work for a publication. Look at the interview New York ran with Kathleen Turner last week. It’s great, in part because she is great, and in part because David Marchese is an excellent interviewer; his piece with Quincy Jones is also stuff of legend. That’s obviously a really high bar, and I don’t expect any celebrity interviews to truly be that good. (This interview with him, actually, is excellent and very logistics-heavy. There’s a reason he’s good at his job; you can’t just SHOW UP for these things and expect to get anything useful.) But there has got to be some acreage between that and “you’re so pretty, how’d you get like that?” Even in jest.

And honestly, if you’re going to open with that question, at the very least, get the girl’s freaking beauty routine on record. Jeez.

Rose Byrne Serves Up A Good Old-Fashioned Fug or Fab