Fug Madness 2015: Round One Results

Round Two begins right away on Monday, and here are the match-ups that you YES YOU FUG NATION have created with your votes. Also, this year was the first time I filled out a bracket just to see if I could predict where this would go, so let’s see how I did. Lena Dunham got 7 percent of the vote. Which is about 6 percent more than I expected. Jena’s win means the Kim vs. Beyonce deathmatch we’ve all been waiting for won’t happen, but it also means Kim gets That Panties Dress as an opponent.

My bracket: Called ‘em both. The Beygency is real, y’all.

She’s already dispensed with one teen in Willow Shields. Can Kate Walsh take it to another one?

My bracket: WRONG. I had McPhee upsetting Bella, but that might’ve been wishful thinking at work, because I’m writing Bella’s next matchup and I have a lot more Thoughts about Katharine. As for the other, I actually came close to missing it and putting Willow through, but I changed my mind at the last second because Kate Walsh was one of my dark horse contenders.

No. 2 JENNIFER LOPEZ vs. No. 10 NATASHA BEDINGFIELD (Tuesday)

Natasha kept it close with Rosamund Pike, who came in at a high No. 7 seed in her first season as a Fug Madness participant, but she couldn’t hang with the perennial nutjob and so Natasha scrapes through with 56 percent of the vote.

My bracket: Got ‘em. I didn’t have a lot of faith in Rosamund.

Keke knocked out Marion Cotillard by snagging 57 percent of the vote.

My bracket: NAILED IT. Marion certainly could’ve gone far, but she drew a particularly plucky 14 seed. She’s the 2015 Iowa State Cyclones of it all.

This will basically be a naked-off.

My bracket: Got it. There was no denying either of these women.

This is one of those clashes that I think people might wish would play out for real in an MMA ring.

My bracket: Got Miley over Jared Leto, but I incorrectly picked Julianne Moore to advance. I mean, she won everything else this season, right?

Anne Hathaway’s massive denim pants put up a pretty good fight here, but Rosario got 60 percent of the vote anyway. It was one of the closer match-ups in the early rounds. And Kate fended off her Mini Me without much effort.

My bracket: Got it. Phew. So far I’m doing okay.

My bracket: Got it. Fug Nation never seems as fed up with Kruger’s wardrobe as I am. 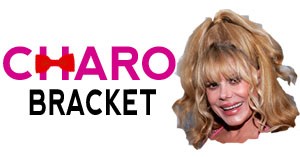 Drawing Rita Ora must feel like a gift — she’s a slayer of most opponents — but Hendricks could make it tough. THAT BOW DRESS. Awful.

My bracket: Got it. Don’t tell, but I think we seeded Kerry Washington too high. We try to adhere to some of the NCAA Tournament’s principles, which is that a lot of the “mid-majors” — a.k.a. less-famous people — get lower seedings just by dint of being in smaller conferences, which can create the exciting upsets and Cinderella stories. (Although occasionally one is so good that it sneaks into the top tier of seeds.) That might be how we got Kerry as high as a nine. ANYWAY. BORING. It happens.

Upset! Irina knocked out Ellie Goulding after playing her way into the tournament against some fellow models.

My bracket: For some reason I picked Malin Akerman over Iggy Azalea. And I totally had Ellie Goulding. I don’t even think I knew who won the play-in game at the time. It’s like they always say: The hasty pick makes the worst pudding. (Note: No one says that.)

I love the idea of this one. How the hell am I going to sift through their outfits to write the post? That is A LOT OF STUFF.

My bracket: Got it. They both seemed inevitable.

No. 3 LINDSAY LOHAN vs. No. 6 CHRISSY TEIGEN (Tuesday)

I would LOVE for these two to grapple in real life, because Chrissy would Get-A-Grip all OVER Lindsay. She might actually be the bracing tonic LL needs.

My bracket: I knew Chrissy had legs. Both in life and in Fug Madness. My bracket: I picked Li Bingbing right after I wrote the post.  I convinced MYSELF, by accident.

Heidi Klum is basically always good for at least one win.

My bracket: Yep. Nothing to see here.

As opposed to some of these other ones, I’ve decided THESE two would actually HATE each other.

My bracket: Got it. K.Stew tried, and she brought some REALLY BAD PANTS, but Cara just has the aura of an enduring fugger about her.

Julianne dispensed with Gwyneth Paltrow, which may be the first and only time that sentence is ever written in any context, ever, literal or figurative or metaphorical or anything. I just clapped my hands with glee at the prospect of this clash.

My bracket: Got it. Julianne’s Zimmermann was THAT BAD. She is probably seeded too low, but again, what can you do? Sometimes the plucky double-digit seeds making a run is half the joy of the tournament.

MY TOTAL: I lost five games, and two Sweet 16 players (WHY did I have so much faith in Katharine frigging McPhee?!? I think it was a typo… even though it was handwritten). So I’m in way better shape than in any of my three March Madness brackets.