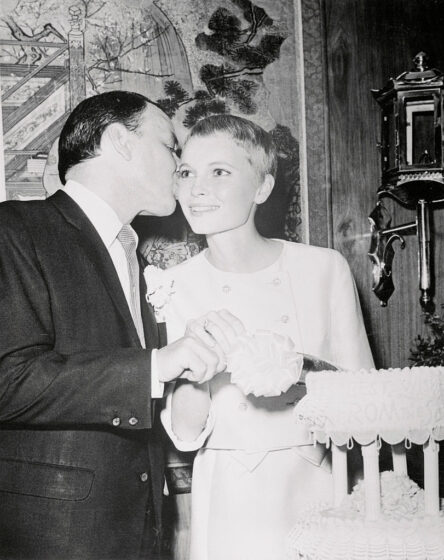 Are you ready to discuss a wedding that was very chic, launching a marriage that was very short-lived but which also gave all of us much gossip? Please pull up a chair, as it’s time for us once again to explore Weddings of Famous People.

Both Mia and Frank have long and juicy Personal Lives sections on their Wikipedias, and let me assure you that neither of them were the other’s most problematic relationship.  They simply got divorced after a couple of years and stayed close friends until Frank died. (This is, of course, leaving aside the rumor that Frank is the father of Ronan Farrow; my take there is that Mia would know — and she has never totally shut down said rumor! — but what is failed to be considered in the oft-floated argument about Ronan’s resemblance to Frank is that Mia kind of looks like Frank herself and Ronan might actually just look like his mother. I will always give credit to Ronan and all the Sinatra kids for seemingly taking this whole thing in good humor.) (It would also be hard to beat Woody Allen in the Worst Mia Farrow Relationship Sweepstakes, obviously.) (Mia has had a lot going on over her lifetime.)

Speaking of their divorce, and rumors, there was a long-standing rumor that Frank hated Mia’s Rosemary’s Baby hair so much that he served her with divorce papers when he saw it, and when I saw these snaps, I thought, “that rumor is so dumb; she had that haircut when they literally got married,” and I was pleased to see that Mia herself set the record straight on that question in the New York Times in a very amusing letter. (The NYT should have figured this out with a little Googling, honestly.) But while we’re on the topic of Rosemary’s Baby, this is a tremendous clip from Mia’s Wiki that places us neatly into context for this chic wedding for a short marriage:

On July 19, 1966, [Mia] married singer Frank Sinatra at the Las Vegas home of Jack Entratter. Farrow was 21 years old; Sinatra was 50. [There is your first problem. – J] Sinatra wanted Farrow to give up her acting career, which she initially agreed to do. She accompanied Sinatra while he was shooting several films, but soon grew tired of doing nothing and signed on to star in Roman Polanski’s horror film Rosemary’s Baby. Filming of Rosemary’s Baby ran over its initial schedule, which angered Sinatra, who had cast Farrow in a role in his film The Detective (1968). After Farrow failed to report for filming, Sinatra cast actress Jacqueline Bisset in Farrow’s role. [It’s hilarious to me that she apparently just didn’t show up? Maybe she should have given him a heads-up at dinner or something. Having said that, Rosemary’s Baby is UNQUESTIONABLY better than this Sinatra movie and it definitely made her a star, so good on you, Mia.] In November 1967, while Farrow was filming Rosemary’s Baby, Sinatra’s lawyer served her with divorce papers. Their divorce was finalized in August 1968. Farrow later blamed the demise of the marriage on their age difference and said she was an “impossibly immature teenager” when she married Sinatra. The two remained friends until Sinatra’s death.

There is something sort of sweet to me about the fact that they seemingly were just like, “eh, two years into this and we tried it! Let’s just hang out socially” and then they….did. (And later Frank offered to break Woody Allen’s legs, which…well, I don’t condone violence but it’s a generous offer, considering the circumstances.)

1. A lot of publications seem to think that Frank and Mia got married at The Sands casino, which Jack Entratter owned, but I do think that Professor Wiki is correct that it was at his actual home, and the contemporaneous piece about the wedding in the New York Times confirms this. (Unless he lived in a suite at The Sands, but articles I’ve found interviewing his wife at the time imply that they did have a house-house in Vegas.) That piece also drops a fair amount of slightly hair-raising intel in an off-handed manner, including that Mia and Frank had only decided to get hitched a week earlier (this all makes me wonder if she thought she was pregnant), and that best man Red Skelton’s wife Georgia had been accidentally shot there at The Sands only the night before. (This contemporaneous news item in the Desert Sun from that same week explains that the revolver which she kept for protection by her bed accidentally went off and shot her in the waist, but later pieces theorized that this was a suicide attempt, and Georgia Skelton did tragically die by suicide ten years later, also via gunshot.)

2. The NYT does not have a credit for Mia’s dress and I cannot find one in my internet searches. She honestly may have just dashed by Bullock’s or something and bought it, or perhaps it was courtesy of the costumer of Peyton Place, which she was in the middle of trying to get out of doing. (Frank eventually extracted her from her contract. If your 21-year old ingenue wants out of her deal you probably aren’t going to blink, but I assume if Frank Sinatra rings you up about this….it all works out.)

3. InStyle reports that Frank courted Mia by being nice to her (deaf) cat Malcom in Palm Springs.  I want Malcolm’s take on this!

4. After the divorce, Mia — like many celebrities in 1968 — grabbed her sister Prudence and took off to an ashram in Rishikesh to study transcendental meditation with the Beatles. (Prudence is the Prudence of “Dear Prudence.”) Frank just kept on being Frank.

Jennifer Lawrence Is Back Out and About